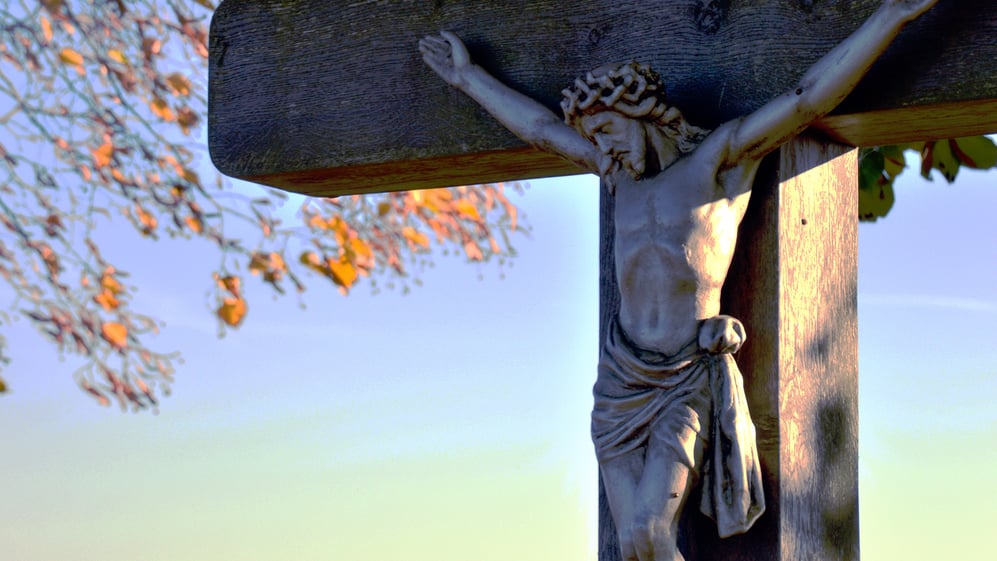 The words: “tertie die resurrexit a mortuis,” from the Textus receptus, are rendered in a clear manner by Luther as “resurrected on the third day from the dead”; admittedly, the introductory text to the Large Catechism and the Torgau sermons insert an “again.” At first, “resurrexit” was translated into German with a simple “arisen (erstanden).” In addition, one also finds “rose up (aufstehen)” or “resurrected (auferstehen).” Instead of the literal “from the dead” that is kept by Luther, some texts render it “from death,” which is what Luther uses in his commentary: “just as He is raised from the dead.”

The Redeeming Work of Christ

Admittedly, commentary on the Second Article in the Catechisms clearly accentuates the redeeming work of Jesus, not His person as divine and human. But, at the same time, Jesus’ office and work are not described in intellectual terms; instead, the dramatic action of a battle unfolds in narrative fashion, by means of which Luther extols the “for us” aspect. In which way, by what actions, did Jesus Christ become my Lord?

By this means, the reformer seizes upon the central confessional statement of early Christendom: “Jesus is Lord!” (Rom. 10:9; 1 Cor. 8:6; 12:3; Phil. 2:11) and interprets what is described in the Second Article as an explication of that earliest kerygma; testimony is provided to show that Jesus Christ is the one who rules over us as Lord, in the here and now, as the Lord of the one who is making confession.

At this point, the reformer presents independent movement, but in two directions; he starts out by allowing the Christ event that overarches every time and space relationship to focus on the here and now of the one who is making confession: “I believe that Jesus Christ  . . . has become my Lord.” He gave Himself . . . so that He could redeem me and “would become my Lord.” What is attested in the Second Article, as the saving action of Christ that encompasses the world, comes upon us, concentrated in our experience as we are confronted in the here and now: Jesus Christ, my Lord, is my redeemer. But Luther takes another step as well, when in a colossal way he expands that here and now.

Jesus Has Freed You from Sin, Death, and the Devil

This second step marks out for us so-called modern human beings something that alienates us from Luther’s understanding. In the Small Catechism, Luther permits the one who is making confession to be enwrapped completely by the Christ who rules. From below and from time past, the one who was humiliated now holds onto the believer; from above and from future time, the one who is elevated at the right hand of the Father holds that same believer.

By means of His humiliation, which culminates in His death as an offering, Jesus Christ freed us from the tyranny of those powers of destruction: sin, death, and devil. The event on the cross at Golgotha has seized the one who is making confession and has transferred that believer into a new status through Holy Baptism; in our baptism, we were taken up into the event on Golgotha and were buried with Christ in His death as an offering.

A New Life through Christ

This redeeming activity of Christ opens at the same time a new path into an eschatological future, “so that I might be His own and live under Him in His kingdom and serve Him in everlasting righteousness, innocence, and blessedness.” And this newly revealed path of life under the lordship of Christ, at the very same moment, from above and from the future, is encompassed by Christ’s exaltation: “just as He is risen from the dead, lives and reigns in eternity.” Christ’s lordship encompasses my existence in the here and now . . . and it opens to me the future of a life in God that overcomes death. . . . “If you believe on Christ, everything is cleared away for you already, hell is extinguished already, sin is gone already, death is conquered, and you have eternal righteousness, blessedness, and life.”

To read more commentary on the Apostles’ Creed, order the accompanying Commentary on Luther’s Catechisms book below.