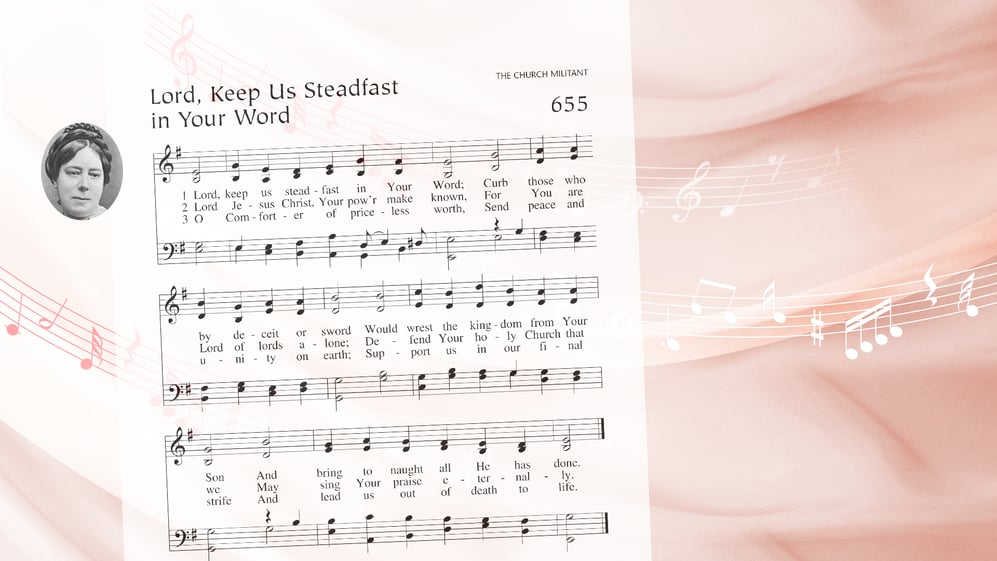 Catherine Winkworth (1827-1878) was born the youngest of four daughters in an Anglican manufacturing family. She was never married, never formally educated, and died suddenly when she was only 50, yet her work translating hymns from German to English is indispensable in the Lutheran tradition of hymn singing today.

Born in London, Winkworth began studying German in her late teens and, molded by her parents’ involvement in her and her sisters’ spiritual upbringing and by private tutors, her study of the German language led her to begin translating German chorale hymns into English.

By the mid-19th century, Winkworth’s translations began appearing in English hymnals. She translated nearly 400 German hymns written by more than 170 authors in her lifetime. Lutheranism in America has relied heavily on her work; 73 of her translations appear in The Lutheran Hymnal and 51 appear in Lutheran Service Book.

Aside from translating hymns from German to English, Winkworth spent her life advocating for women’s rights and education, uplifting the poor and impoverished, and writing histories and biographies on German hymnody and hymnwriters.

Winkworth’s fingerprints are on some of the most prized hymns in the Lutheran tradition, and they are scattered throughout Lutheran Service Book on the whole. Fifty-one hymns in LSB are either partially or wholly translated by her, and an additional 15 hymns model their translations after hers.

Lutheran Service Book uses Winkworth’s translations of Martin Luther’s beloved hymns “From Heaven Above to Earth I Come,” “From Depths of Woe I Cry to Thee,” and “Lord, Keep Us Steadfast in Your Word,” among others. Paul Gerhardt’s “O Lord, How Shall I Meet You,” “All My Heart Again Rejoices,” and “Now Rest beneath Night’s Shadow” feature stanzas translated by Winkworth in LSB.

“Lord, Keep Us Steadfast in Your Word”

The hymn “Lord, Keep Us Steadfast in Your Word” (LSB 655) was one of Martin Luther’s last hymns, written in 1541. Luther included the text in his Admonition to Pray against the Turks in the midst of the Ottoman Empire’s conquest that had spread into western Europe and Germany.

This hymn appeared in the 1544 Wittenberg hymnal and was described as “a children’s hymn to sing against the two archenemies of Christ and His holy Church: the pope and the Turks.” Stanza one read: “Preserve us, Lord, in Your Word, and restrain the murder of the pope and Turks, who would cast down Jesus Christ, Your Son, from Your throne.”

As the threats from Rome and the Turks became less pressing, some Lutherans changed the text of stanza one to a more generic supplication for defense against the enemies of God’s Word. Winkworth first translated this hymn in 1863, but Missouri Synod Lutherans didn’t include her translation in their hymnals until The Lutheran Hymnal was published in 1941.

LSB uses Winkworth’s original translation with a few updates reflecting the progression to modern English. Her translation of stanza one reads:

Lord, keep us steadfast in Your Word;

Curb those who by deceit or sword

Would wrest the kingdom from Your Son

And bring to naught all He has done.

Winkworth’s translation of the hymn’s three stanzas maintains the trinitarian theme of the hymn; stanza one addresses God the Father, stanza two addresses His Son, Jesus Christ, and stanza three addresses the Comforter, the Holy Spirit.

Although she was Anglican all her life, Winkworth’s work in bringing German Lutheran hymns to English-speaking Christians went beyond simply translating from one language to another. Having studied the histories and biographies of German hymns and hymnwriters, Winkworth’s work demanded she translate in a way faithful to the original authors.

Although Lutherans in America rightly attribute the historic German Lutheran hymns to their original authors, the work of translating shouldn’t go unnoticed. Writing hymns in one’s own language is important work for the Church and certainly a poetic and spiritual gift. Translating hymns to another language while maintaining theological meaning, but also tweaking words and phrases to fit the new language’s meter and rhyme structure, is another work that requires patience, humility, and thoughtfulness.

Winkworth is one of many English-speaking hymn translators who make it possible for the Church today to retain the treasures its fathers gifted it hundreds of years ago. That all English-language Lutheran hymnals in America feature more translations by Winkworth than anyone else speaks to the volume and importance of her work as one of thousands of writers, theologians, and pastors who have worked to preserve the tradition and treasures from which the Church benefits.

To play "Lord, Keep Us Steadfast in Your Word" and other historical hymns, consider purchasing the organ prelude collection A Reformation Celebration below.