Composer of the Month: Paul Gerhardt 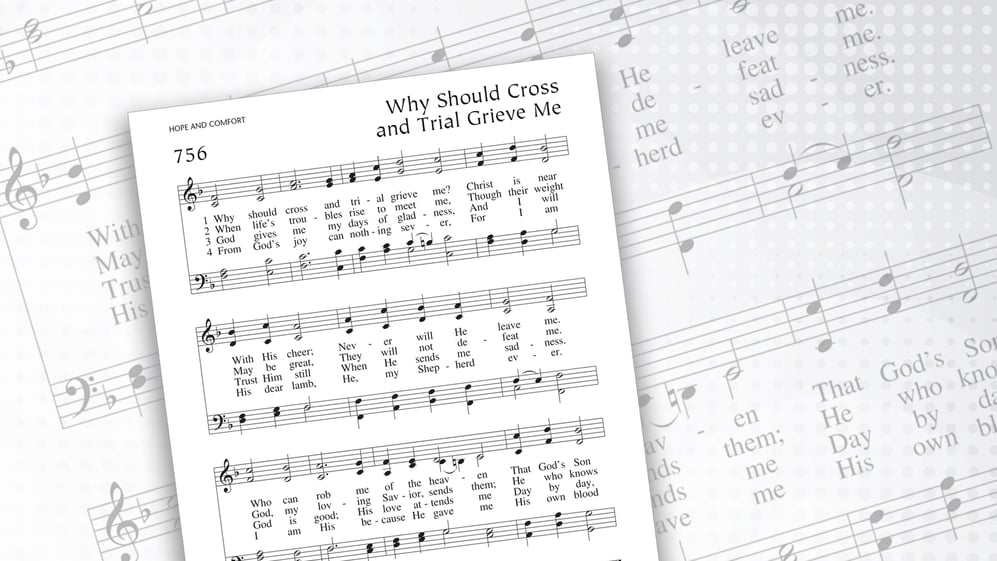 Paul Gerhardt (1607–76) is in a tier only with Martin Luther as the most beloved and celebrated Lutheran hymnwriters in the church today. Seventeen of Gerhardt’s 100-plus hymn texts are in Lutheran Service Book.

Born and educated in Saxony, Germany, Gerhardt was a Lutheran pastor and was skilled in literature and poetry. His hymns gained traction once he befriended Johann Crüger, cantor at St. Nicholas Church in Berlin. Crüger wrote tunes to many of Gerhardt’s hymns and began publishing them in 1647.

Gerhardt endured numerous trials throughout his life. He lived through the Thirty Years’ War in Germany (1618–48). He was dismissed from his Berlin parish in 1666 after he refused to disavow his Lutheran beliefs. His wife and four of his five children preceded him in death.

A portrait commemorating Gerhardt has been in his last parish in Lübben, Germany, since his death in 1676. The caption to the portrait reads:

Gerhardt is commemorated on October 26 in LSB, along with hymnwriters Philipp Nicolai and Johann Heermann. October 26 is the day Nicolai, the eldest of these three German hymnwriters, died.

In 1626, Gerhardt was only one year away from graduating from the royal academy in Grimma, Germany, when a deathly plague reached the town and nearly forced the school to close. Although the plague claimed the lives of hundreds of townspeople, Gerhardt was able to graduate in 1627. He then began studying to become a pastor at the University of Wittenberg, the school where Luther had taught.

Because of the war, Gerhardt was not immediately placed in a parish upon completing his pastoral studies at Wittenberg. During the war, Gerhardt’s hometown of Gräfenhainichen, Germany, including his childhood home and church, were reduced to rubble.

In 1649, after the war finally ended, Gerhardt began his church ministry as a provost and superintendent. He became a senior pastor in 1657 at St. Nicholas Church in Berlin, where Crüger was cantor.

But Gerhardt was dismissed from St. Nicholas only nine years later, the result of an imperial edict that outlawed the Formula of Concord. Gerhardt could not comply to the order to refute his Lutheran faith, so he was removed from his pastorate.

Gerhardt was unemployed for the next year in Berlin. During that year, his wife died. Four of his five children were already dead. In 1668, he received a call to be a pastor at Lübben, where he served until his own death.

“Why Should Cross and Trial Grieve Me”

One of Gerhardt’s most beloved hymns is “Why Should Cross and Trial Grieve Me” (LSB 756). In light of the war, plague, unemployment, and death that upended his life countless times, this hymn is a confession of the great faith Gerhardt maintained. It is also timely for the Church today, whose people experience many of the same trials Gerhardt endured.

Gerhardt’s response every time to the crosses and trials depicted in this hymn is the mercy, love, and grace of Christ. The hymn begins with the question “Why should cross and trial grieve me?” The answer: “Christ is near With His cheer; Never will He leave me.”

When war and plague shook Gerhardt’s foundation in Gräfenhainichen, Christ was near. When Gerhardt’s wife and children died, the cheerful voice of the Gospel was the comfort Gerhardt needed. And for that love and guidance, Gerhardt was thankful (stanza 3).

Though the weight of trouble in Gerhardt’s life was great (stanza 2), it could not defeat him. It took his wife and children in death, and it took his position in Berlin, but Gerhardt knew that Christ’s death on the cross and resurrection from the dead had conquered death and won eternal victory for him, his family, and his church (stanzas 4 and 5).

Gerhardt is a model for all people in the Church today: for students, for pastors, for parents, for laborers, and for anyone who knows the crosses and trials that mortal life brings. His numerous hymn texts are certainly a treasure for us today. We are privileged to sing the words of Gerhardt’s faith, even with a life full of cross and trial.

If your church would like to perform a Paul Gerhardt text, consider trying this setting by Michael Larkin below.