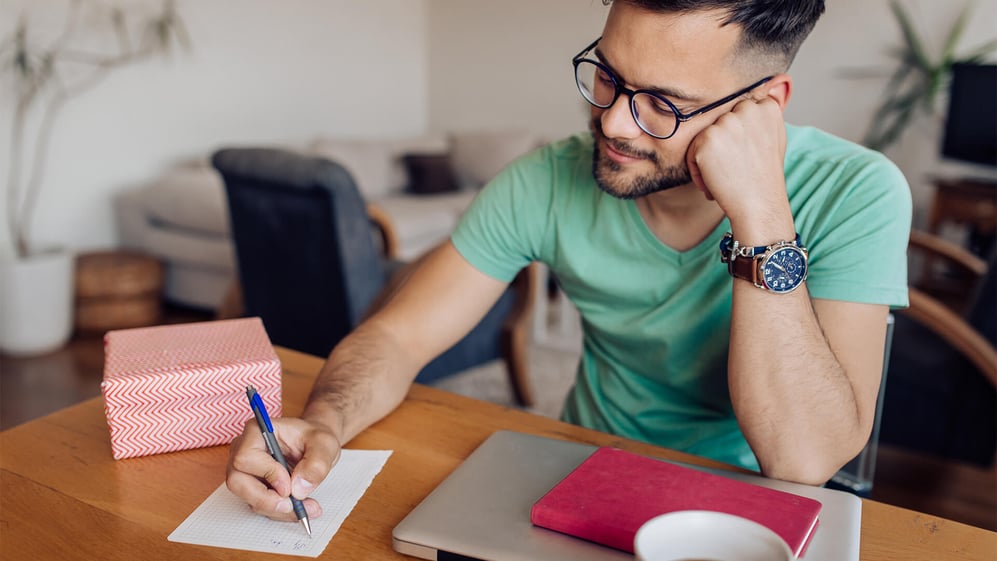 As he is wrapping up 2 John, the Apostle and Evangelist writes: “Though I have much to write to you, I would rather not use paper and ink. Instead I hope to come to you and talk face to face, so that our joy may be complete.” (2 John 12).
Again, wrapping up 3 John, he writes: “I had much to write to you, but I would rather not write with pen and ink. I hope to see you soon, and we will talk face to face.” (3 John 13-14).

Providing pastoral care in the COVID-19 pandemic has been challenging. One reason for that is because the face-to-face interactions we tend to prefer have been limited and mediated by technology. Much like John, Paul, Peter, Martin Luther, and countless others before us, pastoral care sometimes must occur through means other than face-to-face meetings.

Through the past fourteen months, I have written many letters and cards, mailed daily devotions, sent countless emails and text messages, spent a lot of time on the phone, and more hours than I can count on Zoom and Facetime. I am grateful for the technology. Being able to continue to have office hours and Bible studies via Zoom has been incredibly helpful in providing pastoral care through this time.

The Importance of Writing Letters

Opportunity for such face-to-face visitation is of course increasing as restrictions continue to lift. Yet, in my desire to abandon pastoral care by letters and Zoom meetings, I can’t help but consider something else about the importance of letters.

Here I sit, hundreds of years later, constantly benefitting from the letters others endeavored to write because they articulate truths that continue to resonate down to me. Here I sit, reading the words of Apostles and pastors who for whatever reason were likewise unable to care for their people face-to-face. Imagine the treasure that would be lost if John never wrote his letters, if Paul refused to deal with any issues in Galatia or Corinth by letter and would only do so face-to-face.

And it is not just Scriptural letters that can benefit us. Luther knew the power of a letter. Three entire volumes of Luther’s Works are dedicated to his letters, which often contain powerful pastor care for all sorts of situations. Just a couple of weeks ago marked the 500th anniversary of Luther’s appearance at the Diet of Worms (April 17, 1521). Many of the letters in volume 48 of Luther’s Works are written while Luther is being hidden in the Wartburg. Separated from being face-to-face with Philip Melanchthon, George Spalatin, Nicholas von Amsdorf, and many other friends and family members, Luther takes to writing dozens of letters.

Luther’s exile to the Wartburg was not only hard on him, but also challenging for those he wrote to. In one such letter from the Wartburg, Luther writes to Melanchthon, “But who knows whether Christ does not wish to accomplish more by this plan, not only in my case but also in all others? We spoke so many times of faith and hope for the things not seen!”1

A little later in the same letter, Luther writes, “Therefore, all of you, do not be downcast but sing the Lord’s hymn which is appointed for the night. I will sing too; and so let us be anxious only for the Word.”2

How interesting that Luther provides encouragement to those he is separated from by indicating that though they are separated physically, they remain connected by continuing to sing the same psalms and hymns and spiritual songs. This is a lesson I hope we all have learned through this season of pandemic.

Hermann Sasse is also a great example of writing letters in a time and context when other methods of communicating prove impossible. One example of such letters are a collection of circular letters to the pastors of the Westphalia region of Germany in 1944. Sasse sent one example letter to and American pastor with an appended note, saying, “This circular from the year 1944 may show you how we managed at the time since no theological essays and books could be printed.”3

Sasse’s letter writing was a way to provide some continued theological education and encouragement to pastors through World War II, a time when theological books could not be printed in Germany.

Such letters remind me of Paul’s words in another letter, as he writes in 1 Corinthians 13:12, “For now we see in a mirror dimly, but then face to face.” Such words remind us that until Jesus returns, space will always remain for a good pastoral letter … or email or text message. We are right in hoping to see each other face-to-face but let us not refuse to write letters in the meantime. Letters are an encouragement that can continue to the recipients who may read them over and over again. And, as we have seen, letters occasionally are passed down as encouraging and instructing to generations to come.