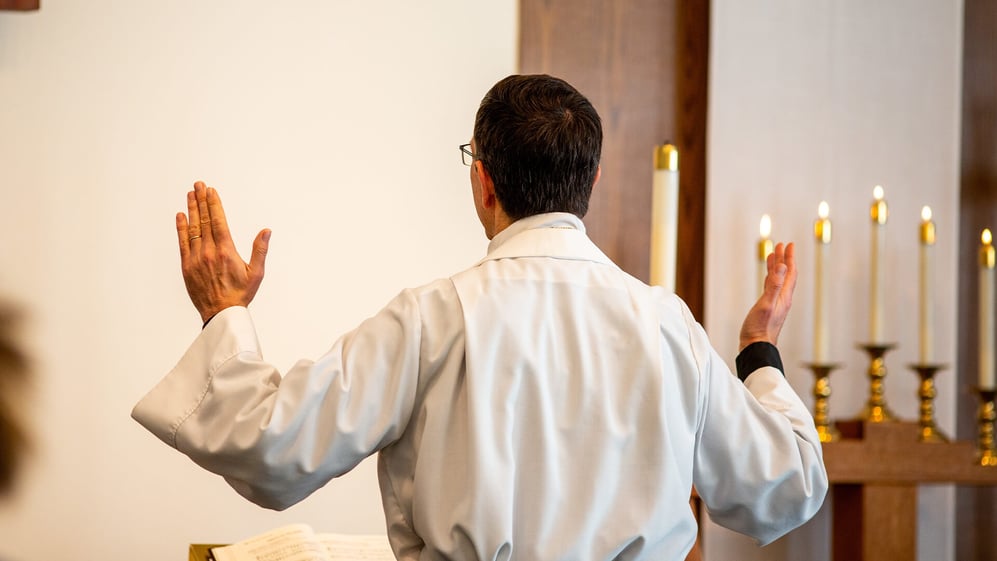 This blog post is adapted from Male & Female: Embracing Your Role in God’s Design.

The order of creation and the unique relationship between head and helper in marriage intersects significantly with the theology of the pastoral office. If the pastoral office is a gift given by Christ to His Bride, the Church, how do we know from Scripture that it should be filled only by men and not by women as well? This goes back to Genesis and the institution of marriage, and it also draws on Ephesians 5 and the way in which marriage is a picture of Christ and the Church.

Creation, Christ, and the Church

At creation, Adam and Eve represented all of humanity. They themselves were the entire society and Church, and God gave Adam the role of head in their relationship. God gave Adam the responsibility as the head to preach His Word about not eating from the tree (Genesis 2:16–17) to Eve, who was created later (v. 22). Adam’s job was to lead those under his authority into knowledge of and dependence on God, and he was to do this in a sacrificial, selfless manner—not from a point of superiority, but out of servant-leadership and responsibility. In this way, Adam’s role and responsibility is much like that of a pastor to Eve, because he is the head.

This is also the role of Jesus as the Head of His Church—He leads His Bride, the Church, into knowledge of and dependence upon God, and He does this through the sacrifice of His death on the cross. He did not save us from a standpoint of superiority but made Himself humble, becoming one of us, and saving us by assuming a position of servant-leadership, taking on the responsibility for our sins. This is how marriage is a picture of Christ and the Church!

Philippians 2:5–8: Have this mind among your- selves, which is yours in Christ Jesus, who, though He was in the form of God, did not count equality with God a thing to be grasped, but emptied Himself, by taking the form of a servant, being born in the likeness of men. And being found in human form, He humbled Himself by becoming obedient to the point of death, even death on a cross.

Therefore, within the Church, what role does the pastor fill? The pastor is selected by the Church to image Christ’s presence to His Bride. The pastor does this by teaching the Word, which leads the faithful into further knowledge of God and dependence on Him. He also does this by forgiving their sins, delivering to them the forgiveness won for them by Christ’s sacrifice on the cross. And he administers the Sacraments, connecting God’s people to Christ’s Headship and physical presence with His people.

The Role of Pastor

This pastoral role is a role of headship, leading those under his authority into greater dependence on their Creator and Redeemer. The Bible reserves this role for men not because there is something about the tasks of this role that women are unqualified to do, but because by having men fill this role, the correct teaching of our relationship to God, to Christ, and to one another is preserved. Marriage is a picture of Christ and the Church, and within the Church, the pastor images Christ to the Bride of Christ.

It is true that many intelligent theologians disagree on the interpretation of several relevant biblical texts. But even if one feels that there is some “wiggle room” here to discuss how women’s ordination may perhaps not undo this picture of Christ and the Church, advocating for the ordination of women inadvertently teaches several errant things.

First, it implicitly teaches that the helper role is less valuable or important than the head role. Suggesting that it is unjust not to ordain women upholds the false teaching that leading is of greater value than following within the Church and within the family. It does not properly honor and respect the unique ways that women are designed to image God’s character and nature to His creation.

Second, and closely connected to the first false teaching, ordaining women reinforces the false notion that the role of pastor is more valuable or important than other roles within the Church. This misconception makes sense from a societal standpoint. From the outside looking in, the pastor looks like the leader, the one who gets all the credit and glory and makes all the decisions within the organization. But the Church is not an organization like other earthly organizations, nor will it make sense to those on the outside looking in. The Church is the Body of Christ, and the pastor is her servant.

Ordaining women also promotes the false understanding that anyone can be a pastor or has the right to be a pastor if they want to. This is not true, even for men. There are many different life situations that may disqualify a man from serving in the Office of the Public Ministry. Additionally, having a woman fill the role as pastor in a congregation, taking on a role of headship, undermines the entire God-ordained design of men for headship and women for helpership (1 Corinthians 11:3, 8–9). Finally, and ultimately, the call to the pastoral office is not just a human call but also a divine call. God chooses who He wants to fill the office of pastor, not us.

This can be a hard teaching to hold to in our current cultural context—we do not wish to appear as backward, sexist oppressors of women! Draw encouragement and strength from this passage regarding the spirit of the world versus the Spirit of God.

Now we have received not the spirit of the world, but the Spirit who is from God. . . . And we impart this in words not taught by human wisdom but taught by the Spirit, interpreting spiritual truths to those who are spiritual. The natural person does not accept the things of the Spirit of God, for they are folly to him, and he is not able to understand them because they are spiritually discerned. The spiritual person judges all things, but is himself to be judged by no one. “For who has understood the mind of the Lord so as to instruct Him?” But we have the mind of Christ. (1 Corinthians 2:12–16)

The way of Christ is fundamentally opposed to the wisdom of the world, and the world is dogmatically set against the wisdom of God. When we Christians act in faithfulness to God’s design, we frequently look backward and wrong in the eyes of the world, and we should expect no less. In fact, if there is no friction at all between the teachings of a church and the teachings of the secular context it is in, then that church should check its theology and make sure it is still aligned with Christ. This very lack of friction should be a red flag!

This is not to suggest that Christians should be argumentative and contrary just for the sake of sticking out or standing apart. No, we are called to love the world and live among others with a spirit of peace. While we hold fast to the teachings of Scripture, we also acknowledge that the Church is not perfect, that she has erred many times, and that the Spirit continually calls us back to faithfulness despite our tendency to distort and exploit God’s good design for His Church and creation.

Learn more about the role of men and women in the Church and God’s creation in Male and Female: Embracing Your Role in God’s Design.

Rev. Jonathan Petzold holds an MDiv from Concordia Seminary St. Louis. He serves as Senior Pastor at Trinity Lutheran Church and School in Roselle, Illinois. Christa Petzold holds an MA in Theology from Concordia University Irvine. She works as a stay-at-home mother, homeschooling their four children. Jonathan and Christa have been married since 2010 and enjoy learning and teaching God's Word together. They also love coffee, Star Wars, traveling, and quiet evenings at home.