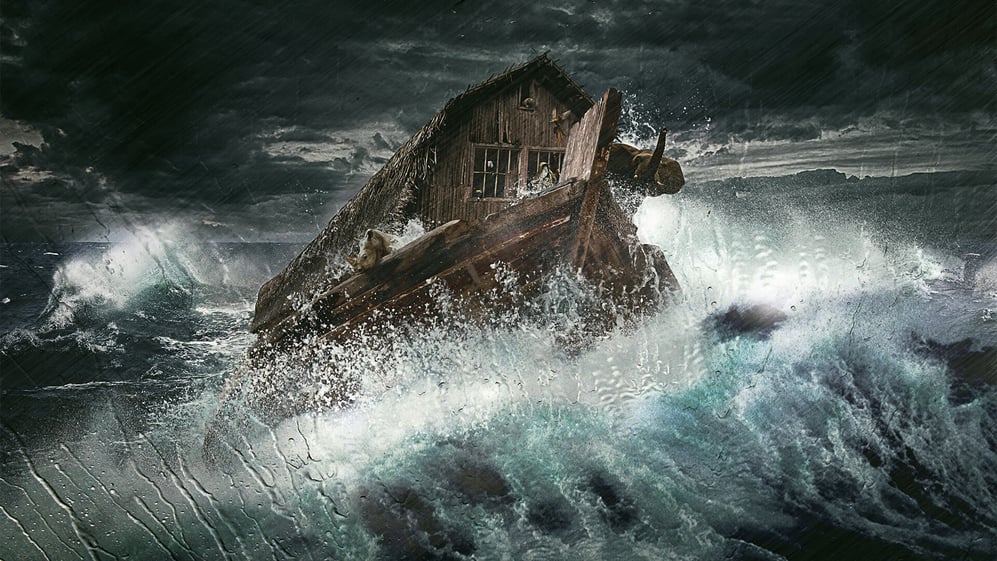 Following forty days and nights of rain, the flood prevailed over the earth for 150 days (Genesis 7:24). God remembered Noah and caused a wind to blow, which made the water from earth. The ark came to rest on the mountains of Ararat in the seventh month (Genesis 8:4). In the tenth month, Noah sent out a dove. The dove couldn’t find a place to rest and returned to Noah. Seven days later, he sent the dove again. This time, it returned with a fresh olive leaf. Seven days later, Noah sent the dove again. The dove did not return, but instead landed on dry earth to nest. Eventually, Noah and his family came upon dry ground. There, they built an altar to the Lord. Then God made a covenant with Noah, “that never again shall all flesh be cut off by the waters of the flood, and never again shall there be a flood to destroy the earth” (Genesis 9:11). In mercy, the Lord gave a rainbow as a sign that He would never again destroy the earth with a flood.

In Genesis 9:9, God states, “Behold, I establish my covenant with you and your offspring after you.” In place of “offspring,” other translations use “descendants” or “seed.” The Hebrew uses ַזרעכם, which is the same word used for “offspring” when God cursed the devil, explaining that “I will put enmity between you and the woman,  and between your offspring and her offspring.” The Offspring of Eve would eventually be Jesus Christ. He would finally bruise Satan’s head. In mercy, God promised salvation through this Offspring and kept this promise by preserving Noah and his family from the flood. From Noah’s offspring, the Savior, Jesus Christ, would finally come.

Regarding the bow in the sky that God offered as a sign of this covenant with Noah, it is likely that rainbows, as we have come to call them, existed as part of creation. However, with God’s covenant, the rainbow takes on new meaning. There are two places in the Bible where a rainbow is used to describe the Lord’s appearance. Ezekiel writes in chapter 1 that seeing the Lord was “like the appearance of the bow that is in the cloud on the day of rain, so was the appearance of the brightness all around” (v. 28). In Revelation 4:3, John writes, “He who sat there had the appearance of jasper and carnelian, and around the throne was a rainbow that had the appearance of an emerald.” For the Lord, the rainbow is a sign by which He promises to remember His covenant with Noah and us. For us, the use of rainbows to describe the appearance of the Lord helps connect God to His work of salvation for Noah and his family, and for all sinners, through the Offspring—Jesus Christ.

There was a reason for the flood. Although this month’s reading is largely good news, God’s covenant and the rainbow are evidence of salvation from the enormous punishment which the Lord brought upon a sinful world. So depraved had God’s creation had become depraved, according to Genesis 6:6: “The Lord regretted that He had made man on the earth, and it grieved Him to His heart.” This grief and sadness led to wrath. This awful censure is challenging for us because of its grandeur and comprehensiveness. Not one person survived outside of the ark. We know that salvation is given through faith in Jesus Christ. Although we cannot know who among those who died in the flood had faith or not, we can be sure that those who did not were condemned to hell.

The warning the world needs today is not of some natural disaster; it is of Jesus’ return. When Christ comes back, there will be a flood—a flood of Christ’s righteous judgment. Those who are saved on the “ark” of salvation will be escorted to heaven. Those who do not know Jesus will spend eternity drowning in spiritual death.

As an aside, it is important that we understand Noah’s state. He was righteous in the sight of the Lord, but still a sinner. So it is with Christians today.

Although God was sorry that He created man on the earth, He extended sweet mercy upon Noah and his family, using them to perpetuate His creation. By doing so, God kept His promise to bring the Offspring, Jesus Christ. In this way, God used Noah to bring us salvation.

Perhaps the greatest connection between Noah’s ark and our salvation is Holy Baptism. God called Noah to build an ark in which He would save him and his family from the coming flood. In Jesus, we are washed in the flood of forgiveness purchased and won by Jesus Christ, who suffered the raging waters of God’s wrath on the cross. In the holy ark of Baptism, we are saved from the coming flood of judgment. As we are mindful of the rainbow, the sign of God’s promise, we recall the words spoken by the pastor at our Baptism: “Receive the sign of the holy cross both upon your forehead and upon your heart to mark you as one redeemed by Christ the crucified” (Lutheran Service Book, page 268). God has placed His everlasting sign upon us and will never let us go.

Read Martin Luther’s interpretations of Genesis 6–11, including Noah’s ark and the flood, in Luther’s Works: Volume 2.