From that time Jesus began to preach, saying, “Repent, for the kingdom of heaven is at hand.”  While walking by the Sea of Galilee, He saw two brothers, Simon (who is called Peter) and Andrew his brother, casting a net into the sea, for they were fishermen. And He said to them, “Follow Me, and I will make you fishers of men.”

One of the two who heard John speak and followed Jesus was Andrew, Simon Peter's brother. He first found his own brother Simon and said to him, “We have found the Messiah” (which means Christ). He brought him to Jesus. Jesus looked at him and said, “You are Simon the son of John. You shall be called Cephas” (which means Peter).

And Jesus said to him, “Do you see these great buildings? There will not be left here one stone upon another that will not be thrown down.” And as He sat on the Mount of Olives opposite the temple, Peter and James and John and Andrew asked Him privately, “Tell us, when will these things be, and what will be the sign when all these things are about to be accomplished?”

Philip answered him, “Two hundred denarii worth of bread would not be enough for each of them to get a little.” One of His disciples, Andrew, Simon Peter's brother, said to Him, “There is a boy here who has five barley loaves and two fish, but what are they for so many?”

What Do We Know about Andrew?

When you hear the word missionary, what comes to mind? Likely, you think of a pastor or other church worker in some faraway land, or perhaps, a church planter here in the United States. Research shows that three of four people who join a congregation do so because someone they know and trust invited them. All the other outreach work churches do accounts for only twenty-five percent of new members. Pastors and DCEs play an important role in outreach, but in the end, it is the members who make the connections.

Andrew is a New Testament example of this. The Gospels recount instances in which Peter’s brother connected others to Jesus. Andrew, along with another unnamed disciple of John the Baptist, spoke to Peter regarding the Savior. Andrew presented to Jesus the boy with five barley loaves and two fish at the feeding of the five thousand. Finally, he and Philip tried to introduce Jesus to some Greeks who were visiting Jerusalem for Passover. Far from a trained missionary, Andrew, a simple fisherman, had a passion for bringing sinners to the Savior

Our society, and arguably humanity at large, does not value submission. We laud individual achievement, self-promotion, and recognition. From what we read in the Gospels, it appears that Andrew was willing to play what some might consider a minor role among the apostles. Nevertheless, it was the role Jesus had chosen for him. Peter was more interested in proving himself: walking out on the water, pledging fidelity to Jesus even to death. Certainly, Andrew was willing to let the light shine on his brother, satisfied to serve his Lord more reservedly.

Andrew is a great example for us. Yet, more important, he points us to Jesus. Christ, being almighty God, took on human flesh and submitted to the will of His Father. His Father’s will required a challenging life and miserable death. Many today, as well as in Jesus’ day, dismiss Jesus. Nevertheless, Jesus’ willingness to submit meant our redemption. Humility led to the most important act in human history.

Encourage students to place great value on what they do for the Lord. God does great things with the simplest of people and with seemingly insignificant actions. Recall that it was Andrew who introduced Peter to Jesus.

Ask students to list five people they might invite to church. Pray with and encourage them to do so. Prepare a display in the classroom including a representation of Andrew, two fish, five loaves, and an empty basket. Each time a student invites someone (even if the person does not come), move one fish or bread into the basket. When the basket is full, share a pizza or other treat.

Just as the Israelites had fear in the desert, we entertain our own fears in the world. Yet God calls us to fear and love Him, which brings... 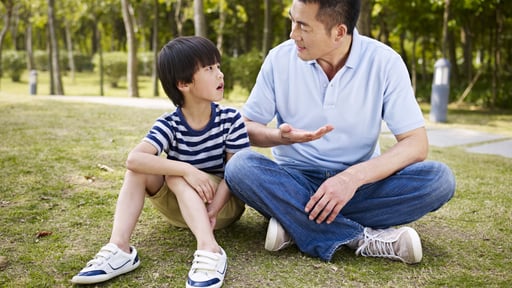 Answering your child’s questions about marriage and sexuality is a daunting task. But God’s Word gives you the answers to teach His design...