Mark 8 and the Identity of Jesus 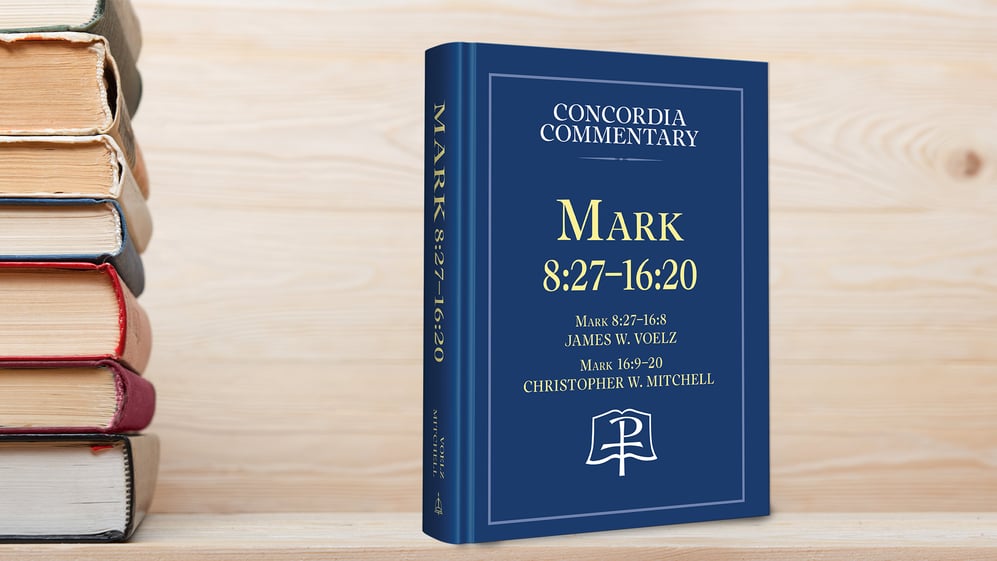 Who is Jesus? This is a question that divides and unifies. It’s a question in which the answer can explain the difference between a Christian and a non-Christian. Volume 2 of the Concordia Commentary on Mark opens with the first public confession of the identity of Jesus by His followers, a confession that seems to show greater insight than exhibited by those followers heretofore.

And Jesus went on with His disciples to the villages of Caesarea Philippi. And on the way He asked His disciples, “Who do people say that I am?” And they told Him, “John the Baptist; and others say, Elijah; and others, one of the prophets.” And He asked them, “But who do you say that I am?” Peter answered Him, “You are the Christ.” And He strictly charged them to tell no one about Him. (Mark 8:27–30)

Once again Jesus admonishes to silence. This admonition tells us that Peter’s understanding of Jesus’ identity in 8:29 is a correct one—Jesus neither corrects Peter’s assessment nor rebukes him (he admonishes silence only regarding sharing the information). Therefore, Peter does see. He does get it, and from the standpoint of the narrative, he seems to have gone from partial sight (“who, then, is this … ?” 4:41) to clear sight (“you are the Christ/Anointed One,” 8:29)—a manifestation, as it were, of the metaphor of the blind man healed in two stages in 8:22–26 (see the commentary on 8:26). But Peter’s understanding is a volatile one, fraught with potential danger, since the appellation ὁ χριστός (“the Christ”) in the first century AD was commonly seen to denote the one who would implement a glorious reign and rule in the name of Yahweh, as depicted in Psalm 2, one in which he as God’s “Son” (Ps 2:7) would triumph physically over his and Yahweh’s foes (Ps 2:5, 9; cf. Zech 9:10) and extend his reign to the ends of the earth (Ps 2:8; cf. Zech 9:10), or, expressed in slightly different but related terms, as we have noted, the appellation was seen to denote the one who would bring the “coming reign and rule/kingdom” of David (see 11:10), which would also have these characteristics. The first-century-BC document Psalms of Solomon expresses this view well, as it combines the appellations “messiah/anointed one,” “king,” and “the son of David” in chapter 17 (Ps Sol 17:21–24, 26, 29, 32):

See, Lord, and raise up for them their king, the son of David, to rule over your servant Israel in the time known to you, O God. Undergird him with the strength to destroy the unrighteous rulers, to purge Jerusalem from gentiles who trample her to destruction; in wisdom and in righteousness to drive out the sinners from the inheritance; to smash the arrogance of sinners like a potter’s jar; to shatter all their substance with an iron rod; to destroy the unlawful nations with the word of his mouth. … He will gather a holy people whom he will lead in righteousness; and he will judge the tribes of the people that have been made holy by the Lord their God. … He will judge peoples and nations in the wisdom of his righteousness. … And he will be a righteous king over them, taught by God. There will be no unrighteousness among them in his days, for all shall be holy, and their king shall be the Lord Messiah.20

Indeed, the perspective of Psalm of Solomon 17 is precisely the understanding of Qumran concerning the Davidic Messiah. It is for this reason that Jesus utters his admonition to silence, to dampen such enthusiasm. With the exception of Mk 9:9 (which constitutes a very explicable exception), this is the last admonition to silence in the Gospel of Mark. The reason for this will become very apparent in the next several verses (8:31–32), which comprise Jesus’ first passion (and resurrection) prediction and Peter’s reaction to it. See also the extensive discussion concerning admonitions to silence in the commentary on 1:25, including specific references to this verse (8:30).

[20] Charlesworth, The Old Testament Pseudepigrapha, 2:667. The translation is by R. B. Wright, who observes in note z that commentators have emended the final three words to read “the Lord’s Messiah,” a move with which he does not agree.

This excerpt has been amended from the original manuscript. Some footnotes have been omitted.

This second and final commentary on the Gospel of Mark

details the revelation of who the Christ is.