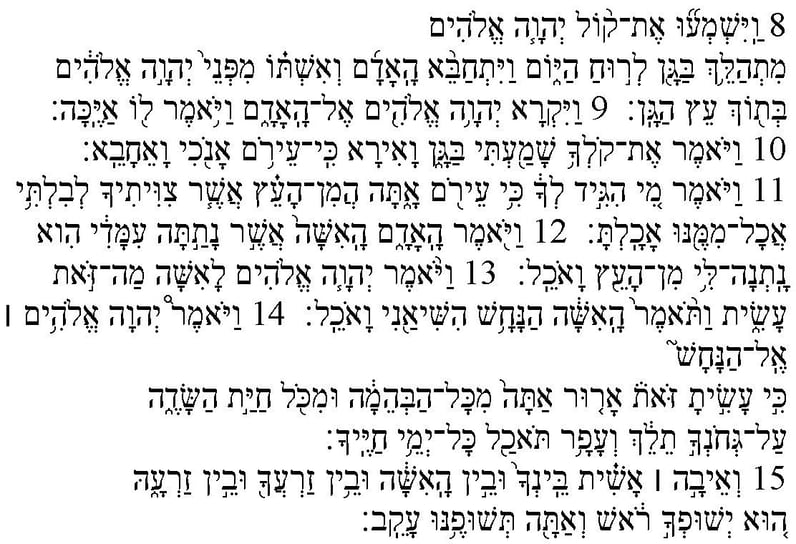 And they heard the sound of the Lord God walking in the garden in the cool of the day, and the man and his wife hid themselves from the presence of the Lord God among the trees of the garden. But the Lord God called to the man and said to him, “Where are you?” And he said, “I heard the sound of you in the garden, and I was afraid, because I was naked, and I hid myself.” He said, “Who told you that you were naked? Have you eaten of the tree of which I commanded you not to eat?” The man said, “The woman whom you gave to be with me, she gave me fruit of the tree, and I ate.” Then the Lord God said to the woman, “What is this that you have done?” The woman said, “The serpent deceived me, and I ate.”

The Lord God said to the serpent,

“Because you have done this,
cursed are you above all livestock
and above all beasts of the field;
on your belly you shall go,
and dust you shall eat
all the days of your life.
I will put enmity between you and the woman,
and between your offspring and her offspring;
he shall bruise your head,
and you shall bruise his heel.”

Since we have the same spirit of faith according to what has been written, “I believed, and so I spoke,” we also believe, and so we also speak, knowing that he who raised the Lord Jesus will raise us also with Jesus and bring us with you into his presence. For it is all for your sake, so that as grace extends to more and more people it may increase thanksgiving, to the glory of God.

For we know that if the tent that is our earthly home is destroyed, we have a building from God, a house not made with hands, eternal in the heavens.

Then he went home, and the crowd gathered again, so that they could not even eat. And when his family heard it, they went out to seize him, for they were saying, “He is out of his mind.”

And the scribes who came down from Jerusalem were saying, “He is possessed by Beelzebul,” and “by the prince of demons he casts out the demons.” And he called them to him and said to them in parables, “How can Satan cast out Satan? If a kingdom is divided against itself, that kingdom cannot stand. And if a house is divided against itself, that house will not be able to stand. And if Satan has risen up against himself and is divided, he cannot stand, but is coming to an end. But no one can enter a strong man’s house and plunder his goods, unless he first binds the strong man. Then indeed he may plunder his house.

“Truly, I say to you, all sins will be forgiven the children of man, and whatever blasphemies they utter, but whoever blasphemes against the Holy Spirit never has forgiveness, but is guilty of an eternal sin”—for they were saying, “He has an unclean spirit.”

The following is from from Luther’s Works, the American Edition: vol. 1, copyright © 1958 by Concordia Publishing House. All rights reserved.

“This is the description of the trial. After Adam has become terrified through the awareness of his sin, he avoids the sight of God and realizes that not only Paradise but the entire world is too narrow to be a safe hiding place. And now, in that mental agony, he reveals his stupidity by seeking relief from sin through flight from God. But he had already fled too far from God. Sin itself is the real withdrawal from God, and it would not have been necessary to add any further flight. Thus it happens—and this is the nature of sin—that the farther man withdraws from God, the farther he still desires to withdraw; and he who has once fled and apostatized keeps on fleeing forever. And so some also maintain concerning the punishments of hell that this will be the most terrible thing: that the ungodly will desire to flee and yet will realize that they cannot escape. So it was with Adam here; although he was caught, nevertheless he does not stop fleeing” (pp. 172–73).