Second Sunday after the Epiphany 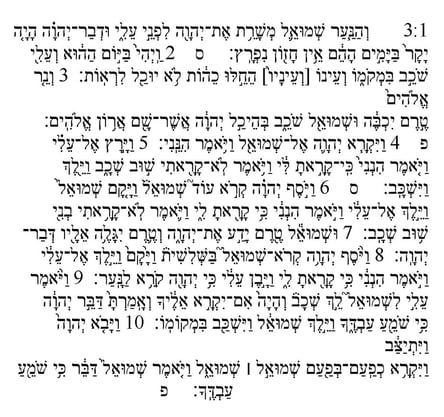 Now the boy Samuel was ministering to the LORD in the presence of Eli. And the word of the LORD was rare in those days; there was no frequent vision.

At that time Eli, whose eyesight had begun to grow dim so that he could not see, was lying down in his own place. The lamp of God had not yet gone out, and Samuel was lying down in the temple of the LORD, where the ark of God was.

And the LORD called again, “Samuel!” and Samuel arose and went to Eli and said, “Here I am, for you called me.” But he said, “I did not call, my son; lie down again.” Now Samuel did not yet know the LORD, and the word of the LORD had not yet been revealed to him.

And the LORD called Samuel again the third time. And he arose and went to Eli and said, “Here I am, for you called me.” Then Eli perceived that the LORD was calling the boy. Therefore Eli said to Samuel, “Go, lie down, and if he calls you, you shall say, ‘Speak, LORD, for your servant hears.’” So Samuel went and lay down in his place.

And the LORD came and stood, calling as at other times, “Samuel! Samuel!” And Samuel said, “Speak, for your servant hears.”

“All things are lawful for me,” but not all things are helpful. “All things are lawful for me,” but I will not be dominated by anything. “Food is meant for the stomach and the stomach for food”—and God will destroy both one and the other. The body is not meant for sexual immorality, but for the Lord, and the Lord for the body. And God raised the Lord and will also raise us up by his power. Do you not know that your bodies are members of Christ? Shall I then take the members of Christ and make them members of a prostitute? Never! Or do you not know that he who is joined to a prostitute becomes one body with her? For, as it is written, “The two will become one flesh.” But he who is joined to the Lord becomes one spirit with him. Flee from sexual immorality. Every other sin a person commits is outside the body, but the sexually immoral person sins against his own body. Or do you not know that your body is a temple of the Holy Spirit within you, whom you have from God? You are not your own, for you were bought with a price. So glorify God in your body.

The next day Jesus decided to go to Galilee. He found Philip and said to him, “Follow me.” Now Philip was from Bethsaida, the city of Andrew and Peter. Philip found Nathanael and said to him, “We have found him of whom Moses in the Law and also the prophets wrote, Jesus of Nazareth, the son of Joseph.” Nathanael said to him, “Can anything good come out of Nazareth?” Philip said to him, “Come and see.” Jesus saw Nathanael coming toward him and said of him, “Behold, an Israelite indeed, in whom there is no deceit!” Nathanael said to him, “How do you know me?” Jesus answered him, “Before Philip called you, when you were under the fig tree, I saw you.” Nathanael answered him, “Rabbi, you are the Son of God! You are the King of Israel!” Jesus answered him, “Because I said to you, ‘I saw you under the fig tree,’ do you believe? You will see greater things than these.” And he said to him, “Truly, truly, I say to you, you will see heaven opened, and the angels of God ascending and descending on the Son of Man.”

“Here in 1 Cor. 6:14 Paul is stating briefly what he will spell out at length in chapter 15. The doctrine of the bodily resurrection has important ethical implications for the Christian life. In chapter 15, the apostle speaks in general of the way our resurrection hope should dispel the frivolous attitudes of those who say, ‘Let us eat and drink, for tomorrow we die’ (15:32). In our present text, his specific concern is to show the folly of associating with prostitutes in light of the glorious destiny God has in store for our bodies. The Christian’s body belongs to Christ, the Lord (6:13), and so the Christian must not defile Christ’s possession by sexual immorality” (pp. 216–17).