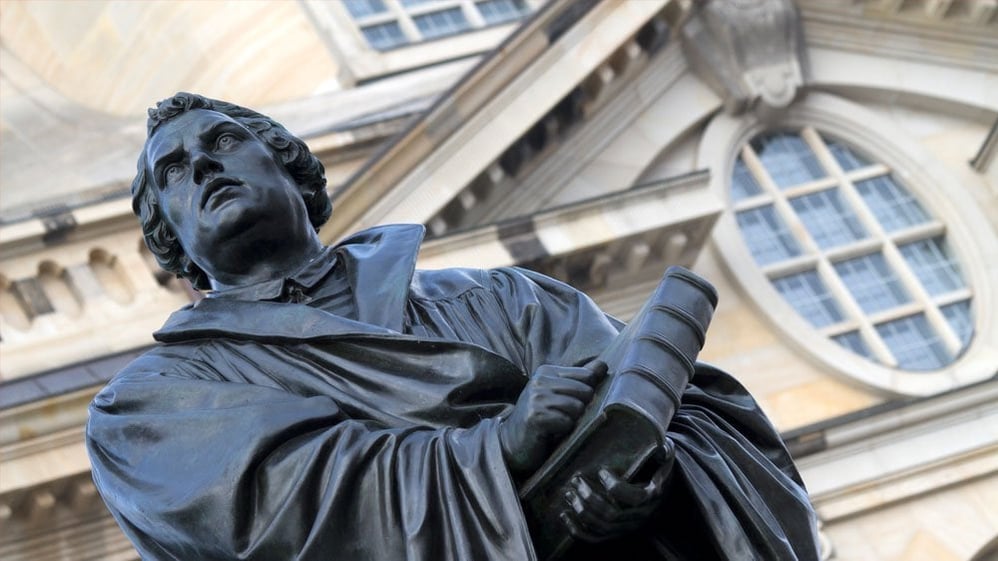 Martin Luther had a lot to say about a lot of things. The poor man even ate dinner with people sitting around taking notes every time he spoke. As a result of Luther saying so much for so long, Luther quotes can often be apocryphal in nature. When I hear one of these quotes, I like to say, “Well that certainly sounds like something Luther could have said, and maybe he should have said it, but he actually never did, as far as we know.”

Here’s a good example of one of the most common: “If I knew the world was going to end tomorrow, I’d plant a tree.” It’s a nice thought. Did Luther say it? No, it has never been found in any of his extant writings.

But you would think that at the very moment when he stood before the most powerful ruler of the day, the Emperor Charles V, and uttered his famous “Here I stand!” remarks, we would be certain of what he said. But as is often the case with matters scholars delve into, it is not as clear as we might hope it would be. We do have a word-for-word transcript of the proceedings at Worms, and at that time handwritten transcripts were very accurate, using a highly refined form of shorthand, allowing a full transcript to be produced.

So, looking at those transcripts, what do we find? In some cases, we do find the words, “Here I stand. I cannot do otherwise. God help me. Amen.” In other transcripts, they are not there. Scholars offer several explanations, and frankly a lot of speculation as well. Some streams of traditional Luther scholarship suggest that the person taking the notes added the words, in a well-intentioned effort to bolster the public’s perception of Luther’s courage and piety.

Here’s what we know happened when Luther was called before the highest authorities of his time to answer for his teachings. In April 1521, he came before Emperor Charles V and various other officials of church and state in the city of Worms. On the first day he appeared, people witnessing the event said he spoke so quietly that everyone had a hard time hearing what he was saying. He waffled a bit, explaining that he needed time to consider his answer, which outraged his opponents who understandably felt he knew full well what he was coming to Worms to do. But the Emperor graciously granted his request for twenty-four hours to consider his response, which had to be given in person and orally, not in writing.

When Luther came back the next day, on April 18, 1521, he spoke much more confidently, and his demeanor was said to be that of a changed man from the day before. He spoke in German first and then in Latin. His voice was loud and clear. It was six o’clock in the evening by this time, and the room was lit with torches. The room was crowded and very hot, and given the kind of clothing they wore in those days (heavy wool) everyone was extremely uncomfortable. Luther was literally pressed in from all sides with people straining to hear his every word (this is an important detail, as we will soon see). The proceedings were held in a larger room from the previous day. It was wall-to-wall with people. The richest, most powerful, and most influential leaders of Luther’s world were all there waiting to hear his answer: do you recant or not?

Luther was asked once more to acknowledge that the books on the table in front of him were his and to say whether he recanted what he had written in them. He responded in a calm, measured, and diplomatic way, excusing his lack of courtly elegance since he was but a monk accustomed to living in relative seclusion and not well versed in the ways of formal address and gestures before such high-ranking officials. He said that he had to this point wanted merely to honor God with his writing and teach the truths of God’s Word to the people. The books before him contained various types of writings: some devotional in nature, some simply laying forth common piety and morals that everyone would agree with, and, yes, some containing language that was too sharp, and he apologized for exceeding the bounds of common civility at times. But some of his writings contained assertions about common public error that violated the very Gospel itself, and therefore he could not recant of those things, for to do so would permit tyranny and godlessness in the Church.

Luther rose to a crescendo in his remarks and asserted that only the clear testimony of Scripture should determine matters of such gravity in the Church. Nothing else would do. But if anyone would demonstrate to him where he had erred in his interpretation of Scripture, he would himself burn any of his books with any such errors in them.

But still, Luther had not answered the crucial question, “Do you or do you not recant?” The Roman Catholic Church and imperial officials were getting quite fed up by now. And after Luther had given his rather long-winded, nonresponsive response in German, he started to repeat himself in Latin. Finally, Luther was ordered that he must now simply give a straight answer, one that was simple, honest, and unambiguous, without “horns”—that is, without rhetorical flourishes and sophistry. Would Luther recant his writings and the errors in them or not? From every reliable source available, we are absolutely certain he said the following:

“Unless I am convinced by the testimony of the Scriptures and by clear reason (for I do not trust in the pope or councils alone, since it is well known that they have often erred and contradicted themselves), I am bound by the Scriptures I have quoted. My conscience is captive to the Word of God. I cannot and I will not retract anything, since it is neither safe nor right to go against conscience. May God help me. Amen.”

But then come the words that are even more famous, “Here I stand. I cannot do otherwise. God help me. Amen.” These words Luther spoke in German, “Hier stehe ich. Ich kann nicht anders. Gott helfe mir. Amen.”

Did he say those words? After reading many different opinions and many different period transcripts of the proceedings, I’ve come to the conclusion that yes, Luther did say them. And here is why I have reached that conclusion. When Luther finished his main response, the room erupted into noisy cheers or jeers, depending on whose side the people were on. Luther quickly was hustled out of the room, with people yelling things such as, “To the fire with him!” I think the room remained quiet enough for the official notetakers to hear his main comments, but at the conclusion it was too noisy for anyone besides those closest to him to hear him say, “Here I stand.” This, too, is the conclusion of other scholars. Others, however, choose to suggest the words were added by friends to his statement. I find it difficult to imagine that on such a momentous occasion these key words would be merely a result of pious afterthought.

Almost immediately, woodcuts showing Luther before the emperor began to circulate, and what words were written on the panel showing Luther making his statement? Yes, the “Here I stand” remarks. I’ve seen several period woodcuts, some even in color, and they all contain the words, in German, “Hier stehe ich,” etc. You can see one of these woodcuts in the image above.

Ultimately, it really does not make too much difference if he actually said those words or not. Clearly, he refused to recant of what he had been teaching: that we are saved by God, by grace alone, through faith alone, on account of Christ alone, something that the Roman Church had thoroughly obscured and contradicted.

And so with Luther, we, too, can and should say, “Here I stand. I cannot do otherwise. God help me. Amen.”