Music of the Month: O Rejoice! 25 Hymn Introductions for Organ 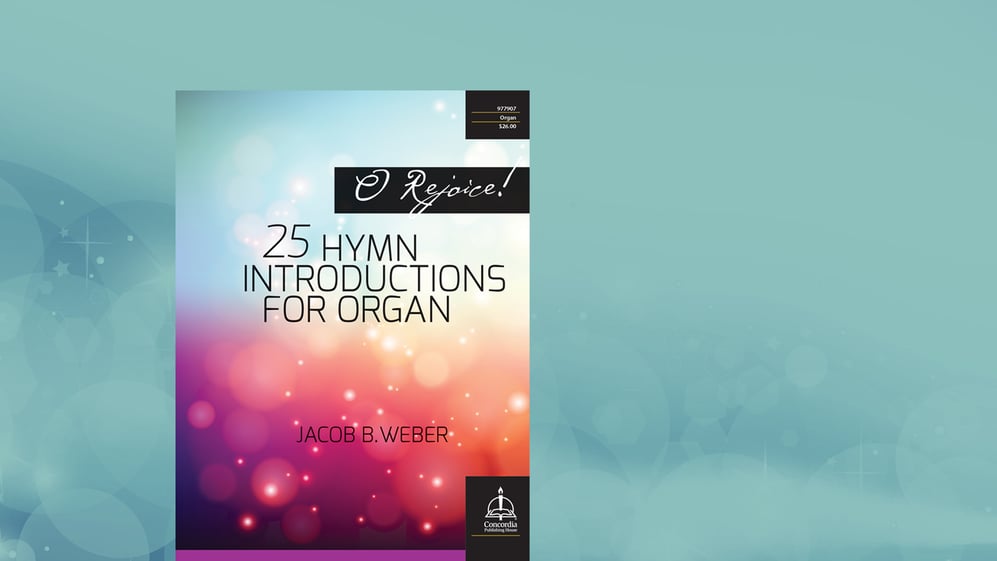 Are you in need of some fresh and innovative music for Sunday morning worship? Bring creative variety to your hymn playing with these artistic hymn introductions for organ. Some of these introductions explore the hymn tune in full, while others use only a portion of the tune. All of them set the tone for the hymn and prepare the congregation to sing.

Jacob Weber’s O Rejoice! 25 Hymn Introductions for Organ will surely be timely and practical for any parish organists looking to introduce hymns in ways beyond simply playing the setting provided in the hymnal or playing a part of a larger prelude on a hymn tune.

Most of the twenty-five hymn tunes in Weber’s volume of introductions are in Lutheran Service Book, and many of them are common among other denominations’ hymnals as well. Before joining Concordia Publishing House as associate editor of music and worship, Weber served in the parish as Kantor of Emmanuel Lutheran Church and School in Dearborn, Michigan, where he often wrote introductions to hymns, some of which made their way into this volume.

“Playing organ every Sunday, you find hymn introductions and create them, and sometimes I’d write them down and put them aside,” Weber says. “I started collecting many of them and looked back and thought this might make a nice collection of hymn introductions. So it was probably five to six years’ worth of saving them and putting them together.”

Each hymn tune in a hymnal has a distinct character and may or may not be well-known to a local congregation. Weber says he had to consider these and other factors when composing an effective hymn introduction that prepares a congregation to sing the hymn.

“I think many of these are going to be somewhat familiar. For a familiar hymn, the introduction might consist of the first line and the final line, but not in your standard format from the hymnal,” Weber said. “If it’s not a familiar hymn, usually I’ll present the entire tune.”

Although Weber’s introductions feature each hymn’s melody in a manner different from the hymnal’s presentation of the hymn and its harmonization, all of the introductions are under a minute in length and serve the purpose of preparing people to sing.

“They’re not very long, and you don’t want to give a performance,” Weber said. “[The most important part is] preparing the congregation to sing with confidence while providing an introduction that fits the character of the hymn.”

“Whenever I provide a registration, I always consider it as just a suggestion—something you can use on any instrument,” Weber said. “But the freedom to get creative with color and everything is there, so I definitely encourage organists to get creative.”