Music of the Month: Let All Things Now Living 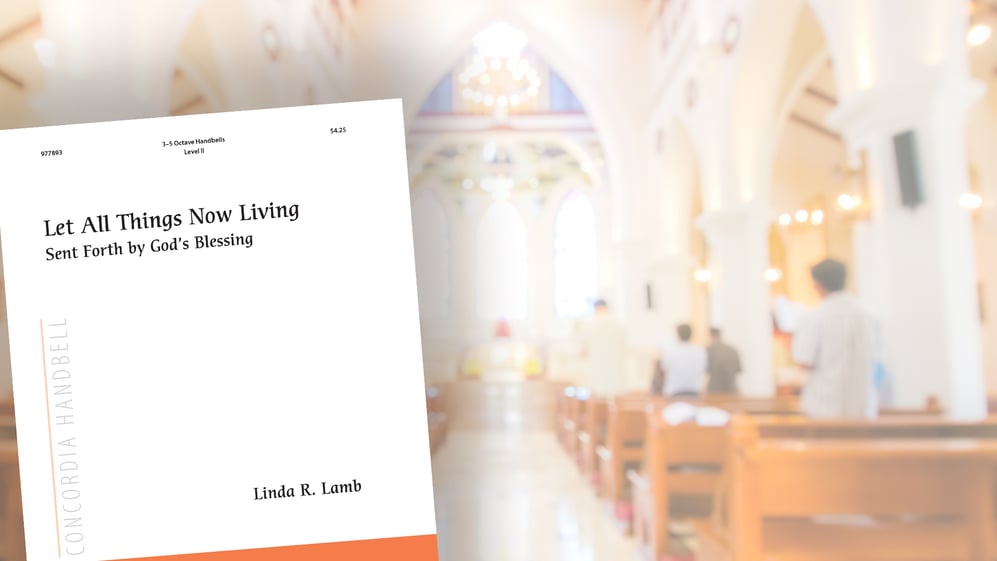 “Let All Things Now Living” gets a lively calypso setting in this arrangement, which expresses the excitement of the text. A more tranquil, hymn-like second stanza leads back to a dance-like ending. The tune THE ASH GROVE is used with many texts, including “Sent Forth by God’s Blessing,” making this a useful arrangement throughout the Church Year. Level II.

“Let All Things Now Living,” originally written by Katherine Davis (1892–1980), is an appropriate hymn for use throughout the Church Year. With themes of thanksgiving, creation, and preservation, it encompasses Old Testament tropes as well as sentiments appropriate for the church-at-large today.

Lamb’s handbell setting of the tune begins in 4/4 meter with a syncopated version of the tune. This version is defined in music as calypso, an Afro-Caribbean style of music that originated in Trinidad and Tobago in the nineteenth century.

The calypso style in this setting involves a table malleting technique, where ringers strike bells laying on a padded handbell table with mallets. This creates a short, muted sound that contrasts with the bell’s traditional ringing tone.

The second statement of the tune features the tune’s familiar 3/4 meter, as it is presented in its hymn form, before returning ritornello-style to a short finale in the calypso style.

The second stanza, in particular, could be considered a mirror of the text of “Let All Things Now Living.” No matter what hymn text a handbell choir or congregation thinks of when hearing the melody THE ASH GROVE, this setting should capture the character of both with joyful praise and thanksgiving.

To bring this unique and festive handbell arrangement to your congregation, order the score below.