Music of the Month: Christ Being Raised 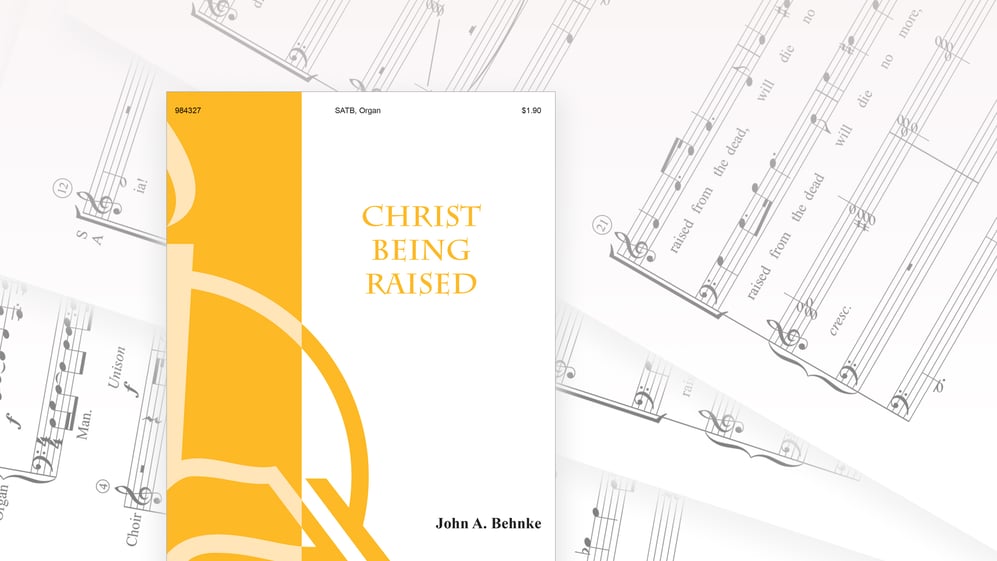 A perfect selection for the Easter season comes in this SATB anthem based on Romans 6:9. Beginning with joyous alleluias, the music rises in sequence, portraying the text “raised from the dead.” The melodic sequences and voice leading make the music easy to learn while still sounding dramatic and powerful.

This anthem’s text is one powerful resurrection verse in the Epistle to the Romans: “We know that Christ, being raised from the dead, will never die again; death no longer has dominion over him.”

In a world currently suffering from death's destruction in the form of a global pandemic, this verse reminds us of the work of Christ’s Passion and how it is completed: He is risen! Although the sorrow and suffering of sickness and death grips our world today and forces us to retreat and stay inside our homes, it has no dominion over Him who destroyed death by dying and rising again.

John Behnke’s anthem surrounds this joyous proclamation of victory over death with a wonderful chorus of alleluias. This one-word Easter proclamation captures the spirit of life and resurrection that Christ brings to His Church, even today as the fear of death threatens to take hold of us.

The piece begins in unison and gradually unfolds the Romans text. The four voice parts ascend in sequence to reflect the action of Christ “being raised,” and they crescendo to a high point when the choir declares that being raised from the dead, Christ “will die no more.”

In addition to SATB voices, the score includes an effective organ accompaniment that sets an appropriate tone for the harmonic arrangement of the voices and leads the singing forward as it builds to and culminates in that wonderful Easter message.

Although church choirs whose congregations are conducting online-only services at this time being won’t be able to sing this piece on Easter Day this year, the Romans 6:9 text appears throughout the seven weeks of Easter as the first half of the Proper Verse of the Day.

For example, the Verse for the Second Sunday of Easter is Romans 6:9 and John 20:29b: “We know that Christ being raised from the dead will never die again; death no longer has dominion over him. Blessed are those who have not seen and yet have believed.”

And for the Third Sunday of Easter, from Romans 6:9 and Luke 24:32: “We know that Christ being raised from the dead will never die again; death no longer has dominion over him. Did not our hearts burn within us while he talked to us on the road, while he opened to us the Scriptures?”

The Proper Verse for all seven Sundays of Easter includes Romans 6:9 as well as a verse from the Gospel for that Sunday. The Verse is most often sung in tandem with the Alleluia(s) in between the Epistle and Gospel. Using this model, the Alleluia and Verse for the Second Sunday of Easter would look like this:

Alleluia. We know that Christ being raised from the dead will never die again; death no longer has dominion over him. Alleluia. Blessed are those who have not seen and yet believed. Alleluia.

If a church wishes to include the latter half of the Proper Verse during the Easter season, the choir could begin the Alleluia and Verse by singing Behnke’s anthem, then either read or chant the remaining verse, and conclude by repeating the final alleluias in Behnke’s anthem, beginning with the pickup to measure 41.

Of course, this anthem can also be used independently of the Alleluia and Verse in another place in the liturgy during the service. And although the text is heard most often during the Easter season, this anthem could be welcome on a Sunday in the Church Year when the readings include the theme of resurrection.

Play “Christ Being Raised” during the Easter season by ordering the score below.