Music of the Month: Chorale Preludes of Georg Philipp Telemann 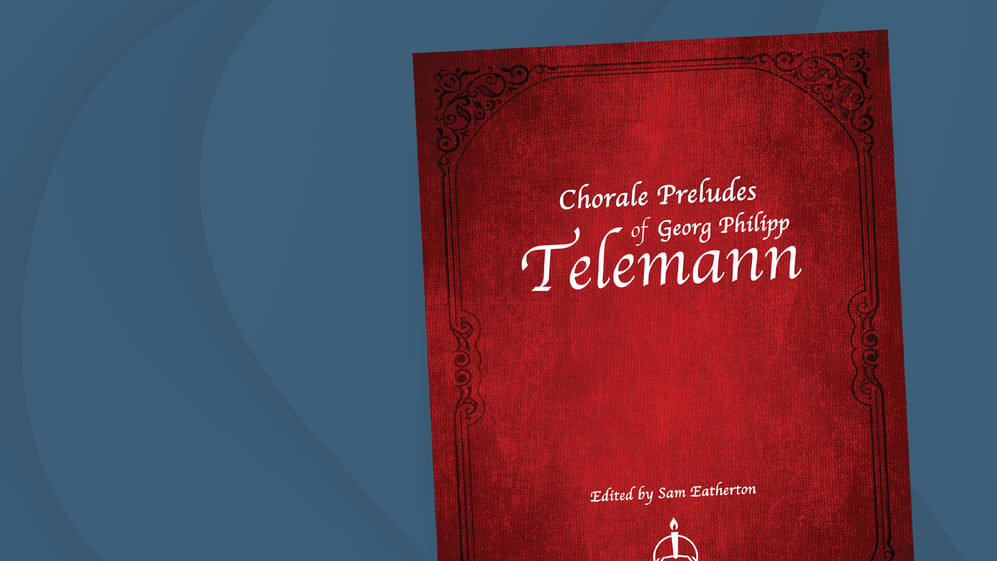 The new music collection features an assortment of nineteen wonderful preludes by Georg Philipp Telemann (1681–1767) and edited by Sam Eatherton. Telemann composed chorale preludes that were typically set twice, the first in three voices and the second alio modo or aliter (“in another way”) consisting of two voices (bicinium), making these settings valuable to student and seasoned organists alike. This collection of chorale preludes was carefully selected and edited by Sam Eatherton to be compatible with Lutheran Service Book and other hymnals. These settings provide a fresh alternative that will appeal to church organists looking for new ways to present these German chorale tunes.

Georg Philipp Telemann was a German musician active in the eighteenth century who tread a unique path to church music. Although his parents dissuaded him from pursuing music professionally, Telemann developed his musical abilities performatively and compositionally in a variety of wind, string, and keyboard instruments.

Telemann enrolled at the University of Leipzig at the turn of the eighteenth century initially as a law student, but music soon took over. In Leipzig, he composed and produced music for St. Thomas Church and the university’s chapel. After his studies, he held positions at the prince’s courts in Sorau, Poland, as concertmaster and kapellmeister in Eisenach, and as musical director in Frankfurt and Hamburg.

Before beginning his work in Hamburg, Telemann turned down a position that would have brought him back to Leipzig to be principal organist at St. Thomas. Instead, the position fell to Johann Sebastian Bach (1685–1750). Telemann was friends with both Bach and George Frideric Handel (1685–1759) in his life, and was godfather to Bach’s son Carl Philipp Emanuel. Carl Philipp succeeded Telemann at Hamburg after Telemann’s death in 1767.

Telemann is lauded for his array of compositional styles. He composed for a great variety of instruments and geographic musical traditions. He wrote effectively both for sacred spaces in churches, lighthearted comedies in opera theaters, and orchestras in concert halls. Although he is often overshadowed by contemporaries Bach and Handel and successors in the Western musical tradition Wolfgang Amadeus Mozart (1756-1791) and Franz Joseph Haydn (1732-1809), Telemann’s legacy lives on, thanks in part to Dr. Sam Eatherton’s revival of nineteen of Telemann’s chorale preludes.

Telemann’s chorale preludes include multiple settings of each tune included, offering automatic variety to the church organist’s library and repertoire. Written in Baroque style, the compositions range from long-note melodic values in bicinium style to polyphonic fugues and fughettas.

Since chorale melodies have changed over time—some more than others—Eatherton’s editorial work has made the tunes compatible with contemporary hymnals, adding to their usefulness for organists today. If an organist wishes to introduce a hymn tune to a congregation before the service, multiple settings of the chorale as it is sung today are available in this collection.

Many of the chorale preludes require little to no pedaling, while others include an involved pedal line, making this set effective for both students and seasoned organists. The repertoire also allows the organist, no matter the skill level, a chance to practice manuals-only technique as well as pedal technique in the same vein as Bach’s Orgelbüchlein.

The nineteen chorales included span hymnody across the Church Year, from the Time of Christmas to the Time of Easter and through the Time of the Church, making this collection useful week in and week out for the church organist.

Bring these nineteen preludes to your church by ordering Chorale Preludes of Georg Philipp Telmann below.