Hymn of the Month: From Heaven Above to Earth I Come 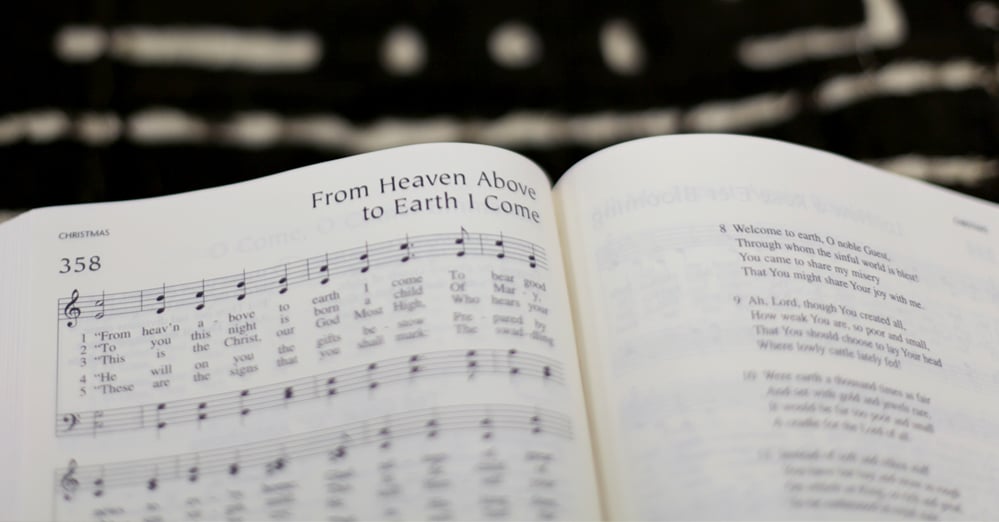 The Hymn of the Month is “From Heaven Above to Earth I Come” (LSB 358), set to the tune VOM HIMMEL HOCH. The text was written by Martin Luther, and it was translated from German to English by Catherine Winkworth, one of the most prominent female hymn translators in history.

These are the signs that you shall mark:

The swaddling clothes and manger dark.

There you will find the infant laid

By whom the heav’ns and earth were made.

The hymn “From Heaven Above to Earth I Come” begins with several stanzas that paraphrase the angels’ message to the shepherds in the Bethlehem countryside on the night Jesus was born. Their description of where to find the Christ Child in stanza five is especially appropriate, for we find Christ in the same way even today.

His swaddling clothes and dark manger certainly were not anything special. His birth—just as His entrance into Jerusalem, just as His death on the cross, and even in the ways He comes to His people today—were veiled and lowly. But this child is God incarnate, the same God who made the heavens and earth.

The means that Jesus uses to come to His Church today are still humble: water and words in Baptism, bread and wine in Holy Communion. Yet these are the signs that we mark today wherein we are clothed with Jesus, the same Jesus who laid in swaddling clothes and a dark manger in Bethlehem.

The angels’ message was for wandering shepherds who wished to go to Jesus and worship Him. How did they describe where the shepherds could find Jesus? Follow the signs. Find the swaddling clothes and the manger. There is the Word of God incarnate; the Christ Child.

Scripture’s message to Christ’s people today is the same. Go to where He says He is. Find the water, the bread, the wine. Attached to the Word of God, there is Jesus. And His Word, through these means, will deliver what it promises, namely, the forgiveness of sins and life everlasting.

Ah, Lord, though You created all,

How weak You are, so poor and small,

That You should choose to lay Your head

Stanza nine addresses the mystery of the incarnation: that God, the divine logos, infinite being and Creator of the universe, who has always been and always will be, would descend to earth in human flesh, not only to become man but to be born and assume the lowliest and most helpless form of human life: a child.

Through the rich theology and wonder of this hymn, we marvel at the reality that God was born with eyes and ears and breathed through lungs and a mouth just as we do, and that even in lowly and unassuming form, He came to redeem and sanctify the world so that it may know Him and live with Him forever.

Just as Jesus’ final hours before His death were the most humiliating and torturous any human being could endure, the hours immediately after His birth were similarly rude and lowly: born in a cattle shed, laid in a trough where beasts would chew and spit around Him.

Instead of soft and silken stuff

You have but hay and straw so rough

On which as King, so rich and great,

To be enthroned in royal state.

Stanza eleven continues the amazement we have at Christ’s humble entry into our realm. Though He came as King of all to free His people from the bondage of sin and death, He was greeted not as royalty, but as a stranger. Just as He entered Jerusalem on the back of a donkey, not a stately steed, His throne in Bethlehem was a lowly manger.

Christ had no fine fabric or gems adorning Him at His birth, only rough hay, and straw. But once again, through these lowly means, Jesus comes to His people in real flesh and blood to forgive their sins and free them from the crippling chains of death.

Like His crucifixion, Jesus’ birth occurs in a state of humiliation, not exaltation. To exalt those whom He loved into everlasting life and peace in heaven, Christ humbled Himself to the point of being born of a virgin, being laid among hay and straw, and even unto the point of death.

Glory to God in highest heav’n,

Who unto us His Son has giv’n!

While angels sing with pious mirth

A glad new year to all the earth.

Christ humbles Himself so that the glory of the Father may be known, and so that once He has accomplished salvation for His people, He may be exalted to the right hand of the Father in heaven. There He sits on His throne everlasting, and along with the angels, His people sing “Glory to God in the highest!”

We praise and glorify God, just as the angels did in the Bethlehem countryside before leading the shepherds to the lowly manger because He has opened heaven and come down to earth in His Son. Because of this, we can be glad this Christmas and every year that passes before we join Christ in heaven to live forever.

The Hymn of the Month is taken from Lutheran Service Book copyright © 2006 Concordia Publishing House. All rights reserved.

To view this song and a complete library of CPH music, take a look at our newest Digital Music Subscription service below.