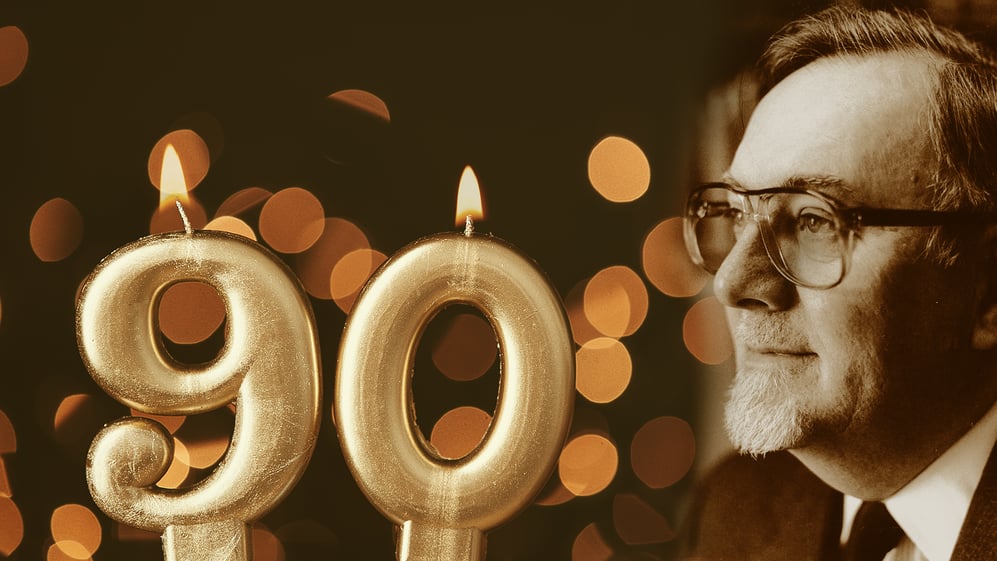 Dr. Schalk has done many wonderful things in his lifetime, from being part of the Lutheran Summer Music Academy and Festival, to editing, teaching, and composing music for the Church. To date, Dr. Schalk has composed hundreds of hymns and other works. It’s no wonder why Dr. Schalk’s ninetieth birthday is such a joyous celebration for CPH, and for the greater Lutheran community.

A Legacy of Music

Nancy M. Raabe captures Dr. Schalk, his personality, and his numerous accomplishments in her book, Carl F. Schalk: A Life in Song, which we have pulled an excerpt from below:

Writing about the hymn for which Carl Schalk is best known, “Now the Silence,” Schalk’s longtime colleague Richard Hillert stresses that “it is important to know that NOW is emblematic of something more than innovation. It is rather representative of a significant continuity that is so evident in his life’s work. That continuity defines the singular career of Carl Schalk, dedicated from its beginning to the musical heritage of the church, and to preserving both the vitality and validity of that heritage in our time.”

The Church as the fellowship of the faithful, which is called, gathered, and enlightened, knows Carl Schalk primarily as a composer. Interestingly, that is not how Schalk sees himself.

“One of the problems in church music publishing, if you think about it, is all the people who think they are composers,” Schalk says, referring to the steady stream of non-liturgical anthems being released by many of the major publishing houses. “I don’t think of myself as a composer.” Then he admits, perhaps in reference to some of his more ambitious recent projects, “Well, I am beginning to think of myself as a composer.”

Schalk’s life illustrates this well-integrated focus on music in the life of the Church. He has authored many books and articles constituting original research on the history of Lutheran music, hymnody, and hymnbooks that are indispensable to all who treasure the music of the Church. His vast catalog of hymns and other congregational and choral compositions and settings continues to grow. For decades, he brought his creative gifts to bear on his work as parish music director and university choral conductor. He schooled a generation or more of students in the great heritage of Lutheran choral music; well equipped, they have become today’s leaders and are now training the next generation. He introduced millions to that great heritage through his work as founding director of the Lutheran Hour Choir and encouraged for that context the creation of new music by other composers.

Schalk contributed to the dramatic reconfiguration of the content, shape, and scope of Lutheran worship in his service on the group that prepared the 1969 Worship Supplement for Concordia Publishing House and in his participation on the Hymn Music Committee of the Inter-Lutheran Commission on Worship, which produced Lutheran Book of Worship, a landmark in the history of Lutheranism in America. Through his involvement in the Association of Lutheran Church Musicians, the Lutheran Music Program, and Lutheran Summer Music, he has inspired, delighted, and enriched countless people of all ages who love and care about the song of the Church in all its aspects.

To celebrate this occasion, we have created a playlist of music that Dr. Schalk has composed for CPH to share his wonderful works with all of you. From all of us at CPH, Happy Birthday, Dr. Schalk!

Allison Lewis is a marketing content specialist at Concordia Publishing House. She is a native St. Louisan, a proud Mizzou J-School graduate, and a huge fan of Blues hockey and Cardinals baseball. Outside of work, Allison enjoys traveling, working out, book club, trying new recipes, and spending time with family and friends.