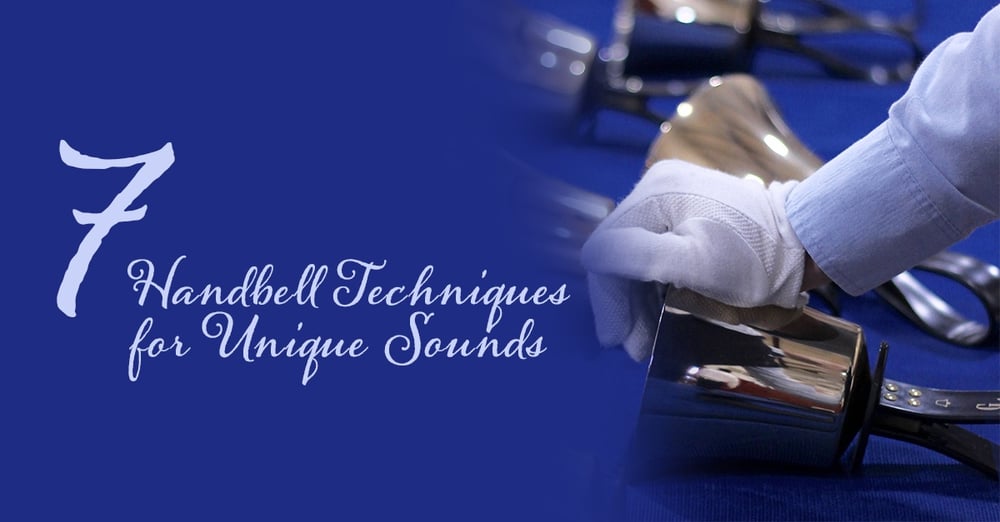 While handbells are a relatively easy instrument to learn, they still offer complexity and much variety in sound. Even those who have played in handbell choirs for a long time will enjoy learning new skills and honing current ones. Here are seven techniques from Successful Ringing Step by Step by John A. Behnke that will help ringers have fun and get a variety of sounds out of the bells.

Plucking is a stopped-sound technique used primarily in the bass clef (C5 and lower). With bass bells lying on the foam pads, grasp the clapper with the fingers, keeping the thumb on top. Throw the clapper down using the hand, while the thumb guides the clapper against the strike point. This produces a crisp, percussive sound.

After ringing the bell with the arm fully extended, swing the bell backward in a reverse arc, extending the bell and arm behind you, then swing back to the front ringing position. An effective swing is determined by the speed of the down and back swing. The swing can be a dangerous technique! Make certain that there is ample room to accomplish the swing before attempting it.

In shelley ringing, the upper octave of notes for four or five octaves can be easily added by crossing them with the lower octave with both handles in the same direction and ringing them together. This combining of bells, based on octave assignments (i.e. E6 and E7, and F6 and F7), still allows for good damping and clean playing.

Thumb damping indicates that the thumb of the hand is placed on the outside of the handbell casting, producing a stopped sound as the clapper strikes the bell. Large bells may require an additional one, two, or three fingers on the casting to achieve a complete and uniform stopped sound. Be sensitive to the sustained resonance of the bells as the clapper strikes the bell; the sound needs to stop in a similar manner.

Martellato technique is achieved by striking the bell directly into the foam table top. The bell should be held horizontally to the table top, with the arm moving in a fashion similar to picking up or setting down a suitcase. The bell should only be two or three inches off the foam before striking. At the correct distance above the foam, you should be able to extend your fingers downward and touch the foam pad. It should be noted that improper use of the martellato technique can damage a handbell. Limit the distance and strike gently.

Suspended mallet requires you to hold the handbells and strike them with a mallet. The most difficult part of this technique is coordinating the picking up and putting down of the bell and the mallet. Practice changing between normal ringing and using the suspended mallet technique. Mallets should strike the bell near the curvature of the casting. Be certain not to hold the mallet too tightly. The fingers of the hand should act as a fulcrum for the mallet, allowing it to freely pivot up and down.