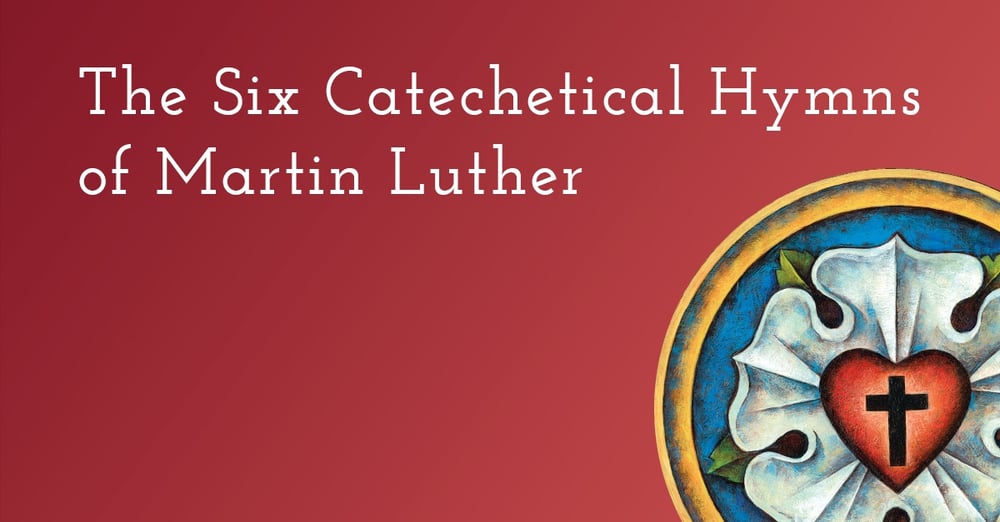 This post is taken from The Hymns of Martin Luther, with historical summaries authored by Henry V. Gerike and edited by Peter C. Reske.

Music can be a powerful teaching tool, and Luther knew that well. By teaching his parishioners hymns about the Ten Commandments or the persons of the Trinity, he could reinforce Christianity’s essential teachings in a memorable and moving way. Learn about his six catechetical hymns below, and at the end of the post, you can download a set of devotions based on the hymns.

With the publication of his Small Catechism in 1529, Luther demonstrated his concern for instructing the people in Godʼs Word. He had already shown this concern in 1524 when he wrote this hymn, which was used in 1525 during weekday Lenten services. After the introductory stanza, each of the Ten Commandments is discussed within a stanza, the exception being the Ninth and Tenth Commandments, which are combined in the tenth stanza. The Commandments show us our sin and our need for a Savior. Thus Luther, in the concluding two stanzas, applies Godʼs Law to our hearts and shows us Jesus Christ as our Savior.

The Creed: “We All Believe in One True God”

This hymn is based on a medieval hymn that summarized the entire Nicene Creed in one German stanza. Luther used that hymnʼs text and music as a foundation on which he built his own three-stanza versification of the Creed, one stanza for each person of the Holy Trinity. Even the medieval tune was reshaped in places to strengthen its support of the text. Appearing first in print in Walterʼs 1524 hymnal, the hymn served a liturgical function within the Deutsche Messe of 1526 and a catechetical function in teaching Christians the basics of the faith.

The Lord’s Prayer: “Our Father, Who from Heaven Above”

Having completed at least one hymn for each section of the catechism, Luther set out to write a versification of the Lordʼs Prayer. Unique to his paraphrase is that almost every stanza is catechetical in form: first, a literal statement of the petition; second, an explanation and application. Though Luther himself wrote a tune for the text, it was never well received. Rather, Schumannʼs 1539 hymnal uses a revised tune from the Bohemian Brethren. It is uncertain how much Luther was involved in revising the tune.

The Sacrament of Holy Baptism: “To Jordan Came the Christ, Our Lord”

Luther wrote this hymn in 1541, though the earliest existing copy is from a 1543 hymnal. This Baptism hymn reflects the teaching in Lutherʼs Small and Large Catechisms. The tune, perhaps written by Luther, was associated with his paraphrase of Psalm 67 and had been so used in a 1524 hymnal. Beginning with the Gospel account of Christʼs Baptism, Luther quickly goes on to explore the riches of Godʼs Word-drenched water of Baptism in which Christians are reborn and receive forgiveness of sins and faith.

Confession: “From Depths of Woe I Cry to Thee”

Psalm 130, which this hymn paraphrases, portrays the deepest repentance, the highest assurance of forgiveness, and the strongest hope of the believer in Christ. Luther used this hymn as an example of the type of German hymn he hoped poets would write for congregational singing. When the hymn was published in 1524, it was paired with Luther’s own new, descriptive tune.

The Sacrament of the Altar: “Jesus Christ, Our Blessed Savior”

Luther’s hymn expounding on the Lord’s Supper was probably written in 1524, the same year it was released as a broadsheet and published in three hymnals. Luther loosely based his hymn on a Latin hymn ascribed to Bohemian reformer John Hus. While the tune originally printed in 1524 is still often used with this text, the present melody is based on a fifteenth-century German trope and was published in Klug’s hymnal of 1533. This standard catechism hymn on the Sacrament of the Altar should not be confused with Luther’s Easter hymn that bears a similar German first line.

Want to learn even more about these hymns?

Download our set of six devotions based on Luther’s catechetical hymns.