Discipleship and the First Commandment 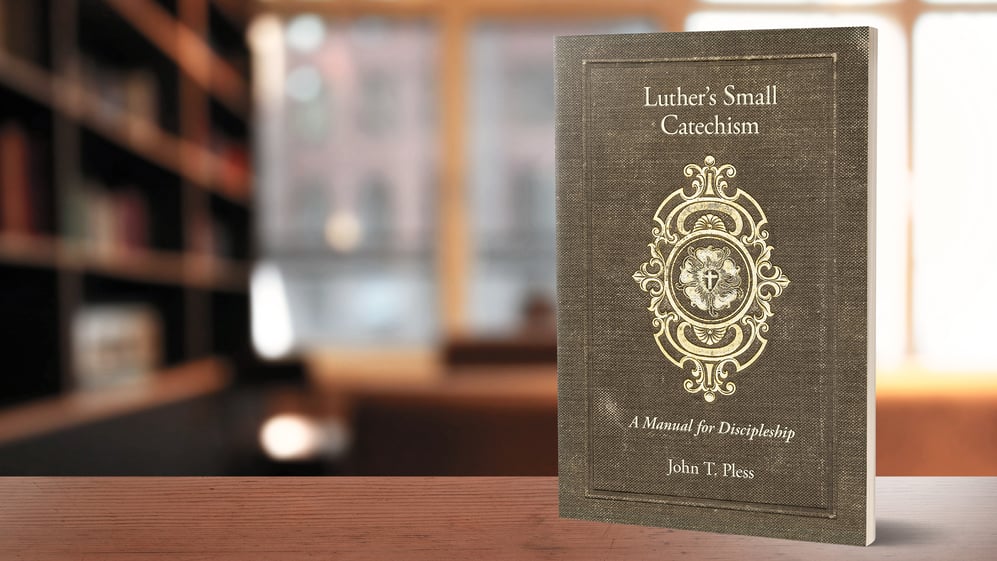 The following is an excerpt from Luther's Small Catechism: A Manual for Discipleship, written by John T. Pless.

The Ten Commandments: Path of Discipleship

Discipleship consists of fearing, loving, and trusting the one true God above all things. To be a disciple is to have a lord, and this lord is the triune God who has created us, reconciled us to Himself, and hallowed us in body and soul to live as His possession.

To fear Him is to live with the recognition that as our Creator, He has authority over our existence, the power to judge us. It is to recognize that He is the One to whom we are accountable. To love Him is to desire Him above all things, to seek no ultimate comfort in any other created being or thing. To trust in Him is to rely solely on His promises in life and in death; it is to look to Him for every good thing.

Our trust is not in what can be seen but in the God who has identified Himself as our Lord in "the promise of all promises," namely, Exodus 20:2, "I am the LORD your God." As Bayer puts it, "Trust in the world without trust in God is an illusion."

Trust is the fundamental synonym for faith in Luther's thinking. One is a disciple of whoever or whatever he or she is ultimately trusting in. As Kolb explains it, this trust is inclusive of one's whole being:

It expressed itself in the emotions, the feelings of peace, joy, delight, and hope from loving God. For Luther, faith or trust included these human actions of understanding, willing and feeling; yet more deeply and completely for him, trust constituted the entire disposition of the individual, of the entire human personality.

Conversely, "Trust in false gods contaminated and corrupted a person's humanity." Faith or trust in the true God comes only through His creative word of promise, the Gospel.

In the First Commandment, God Himself is speaking.

Therefore let everyone take this to heart and thus be careful not to regard this as if a mere human being were speaking. For it brings you either eternal blessing, happiness, and salvation, or eternal wrath, distress, and heartache. What more could you want or desire than God's gracious promise that he wants to be yours with every blessing, to protect you, and to help you in every need? Unfortunately, the world neither believes this nor regards it as God's Word. For the world sees that those who trust in God and not in mammon suffer grief and want and are opposed and attacked by the devil. They have neither money, prestige, nor honor, and can hardly stay alive. Conversely, those who serve mammon have power, prestige, honor, possessions, and all sorts of security in the world's eyes. Therefore, we must hold fast to these words, even in the face of this apparent contradiction, and be certain that they do not lie or deceive but will yet prove true.

The path of discipleship is dangerous, for it is a road subject to ambush by our persistent and ever-resilient enemies of the devil, the world, and our own corrupted nature. Because what we see and experience with our own senses seems more real and trustworthy than God Himself, the life of discipleship calls for discernment. In the words of Friedrich Mildenberger, "We thus learn to distinguish between the illusory world of idolatry that people create for themselves and the real world established by God."

It is the very nature of idolatry that it is illusory. Our word idol comes from the Greek word eidolon, meaning "phantom" or "image." With the First Commandment, God confiscates the totality of the disciple's life; He will not share His disciples with illusory images that promise pleasure but deliver pain, that offer heaven but subject their followers to hell.

The apostle Paul captures the illusory nature of false gods in 1 Corinthians in the context of his discussion of eating food sacrificed in the pagan cults:

In the words of Helmut Thielicke, "For belief in idols does not have its root in the existence of false gods; it is merely a projection of the wandering heart which has fallen victim to blasphemy." God wars against phantoms who are elusive and deceptive. This is why Luther anchors his exposition of the Ten Commandments in the First Commandment.

That on which the heart relies is, in fact, your God. It is faith that makes both God and the idol, Luther writes in the Large Catechism. For Luther, a right understanding of the First Commandment requires the distinction of God's Law from God's Gospel. The First Commandment forbids, prohibits, and condemns trust in anything or anyone other than the God who has made us. This is Law. But there is also good news in the First Commandment because to have the true God by faith is to have the only Lord you need in life and death. Luther put it like this in his exposition of the Penitential Psalms in 1525:

Disciples are those whose lives are oriented by the fear, love, and trust in God above all things. Thus Luther urges Christians:

Learn the First Commandment well, so that we see that God will tolerate no presumption or trust in anything else; he makes no greater demand on us than a heartfelt trust in him for every good thing, so that we walk straight ahead on the right path, using all of God's gifts exactly as a shoemaker uses a needle, awl, and thread for his work and afterward puts them aside, or as a traveler makes use of an inn, food, and lodging, but only for his physical needs. Let each person do the same in his or her walk of life according to God's order, allowing none of these things to be a lord or an idol.

The First Commandment is foundational and essential for disciples of Jesus Christ, for as Luther says, "Out of this commandment flows all the doctrine of the prophets and the psalms as out of a spring and fountain, likewise all curses, threats, and promises."

The First Commandment overlaps with the First Article for disciples of Jesus Christ, who now live as those who are not of the world but in the world. Discipleship does not draw believers out of the world but turns them into the world to live within their vocations in the freedom of faith.

Such freedom is not the license to do as you please. That would be slavery, bondage to the cruelest of masters—the self. Instead, the freedom of faith gives us the courage to live a life of love for the well-being of our neighbors in this world. Where creation is received as a gift from the Father, it cannot be made into an idol.

With a conscience freed by faith in Christ Jesus, disciples now live within creation according to God's Commandments. Oswald Bayer has observed that in the classical liberalism of the nineteenth century, the ethics of Jesus was touted as an ethic of radical obedience, while the ethics of Paul developed into one governed by the household codes borrowed from antiquity.

That is to say that Jesus demanded His disciples to leave house and family, abandoning every domestic tie that would bind them, and to follow Him as spiritual vagabonds. Paul (and those who came after him), on the other hand, expected Christians to live lives of responsibility in their homes and civil communities governed by codes of behavior such as we see in Colossians, Ephesians, and 1 Peter. Liberal theologians of the nineteenth century saw these two approaches in unresolved conflict with each other.

Bayer argues that Luther's approach to ethics is governed by the First Commandment, but unlike the liberal theologians of the nineteenth century, the Reformer sets this commandment not in opposition to responsibilities in creation but within the context of our worldly callings.

It is within the congregation, civic government, family, and workspace that the disciple lives the life of fearing, loving, and trusting God above all things. Discipleship is not an extraction from the network of creation with its obligations to the other people; rather, discipleship is the life of faith and love lived out in the structures that Luther identifies as the three estates.

It is in the three estates—the church, the civil community, and the household—that God's commandments govern human life. In the Small Catechism, Luther sees each of the Ten Commandments as not merely prohibitive, forbidding a particular attitude or action but also as enjoining a positive responsibility. The prohibition of idolatry in the First Commandment prescribes faith, that is, we are to fear, love, and trust in God above all things.

Learn more about Christian discipleship in the new book Luther’s Small Catechism: A Manual for Discipleship by John Pless.