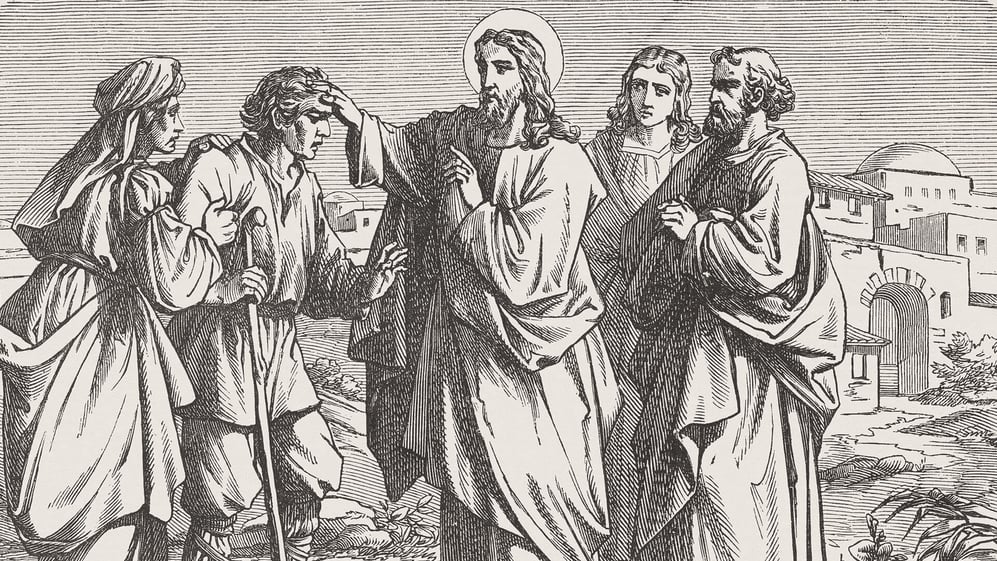 This passage marks a turning point in Jesus’ ministry. He completes His work in Judea and Perea and moves toward Jerusalem, where our Lord will make His triumphant entry and begin Passion Week, culminating in the cross.

There is some uncertainty as to which Jericho Jesus and His disciples approached. By the time of Christ’s ministry, the Jericho of the Old Testament was abandoned in favor of the new city built by Herod the Great just south of the original. Both were five miles west of the Jordan River and fifteen miles northeast of Jerusalem. Jesus and His disciples were slowly ascending to the higher elevation on which Jerusalem sits.

The time is noteworthy. Passover was soon approaching, and as a result, Jerusalem and its surrounding cities and towns, including Jericho, bore a larger population than normal. Understandably, Jesus and His disciples were accompanied by a large crowd as we read in verse 46. What is more, it was common for pilgrims and passersby to encounter blind people and others suffering from crippling debilitation begging. Locations like the synagogue, temple, and city gates had the highest traffic and were ideal for such activity.

It is vital to understand Bartimaeus’s plight. The blind in Jesus’ day had no support system, no education, and no resources for managing life in this condition. There were few if any jobs available to the blind, and Braille did not yet exist. While temples may have allocated funds to support the blind, they did not enjoy the more comprehensive systems we have today. Without the assistance of family or friends, the blind had no option but to beg. It is also worth noting the spiritual aspect of blindness. As with the inability of a woman to conceive children, it was often assumed that the blind suffered God’s punishment because of sin.

Matthew and Luke record this event, although Matthew reports two men. The probable explanation is that Mark and Luke recorded the activity of the more outspoken of the two.

It is also uncertain if Bartimaeus recognized Jesus as the Son of God, the Christ, the Redeemer of the world. He did understand that Jesus was of Nazareth and descended from David physically. Bartimaeus had likely heard that Jesus was a healer, whatever else He was. The expression “have mercy” appears numerous times in the New Testament, conveyed in Greek by ἐλέησόν. Notable instances include the Canaanite woman whose daughter was oppressed by a demon, the rich man in hell, and the ten lepers.

We learn in verse 48 that many rebuked Bartimaeus. This harkens to when the children came to Jesus and the disciples rebuked them. In both cases, those rebuking likely had good intentions—that Jesus would not be impeded in His ministry. However, to care for the suffering was Jesus’ ministry. The crowd, and more specifically the disciples, should have ushered the man to Jesus as soon as they saw Bartimaeus.

There are two points we can derive from the man’s blindness. First, blindness, like any disability, is a consequence of sin, not a direct punishment as many believed and taught in Jesus’ day. It was evidence of the corruption of God’s creative design. Like the entire human body, God created eyes to work perfectly and to last forever. Adam and Eve’s sin was soaked into every aspect of God’s creation, including their bodies.

We also remember that sin has left us spiritually blind, unable to see and choose the one true God. This blindness can only be cured through the work of the Holy Spirit in the Gospel of Jesus Christ.

If Bartimaeus was not a believer in Jesus before this encounter, he became one at some point. Jesus remarks that “your faith has made you well” (v. 52). This pronouncement refers to the physical healing and the forgiveness of sins and everlasting life, which Bartimaeus receives through faith.

In this encounter, we see Jesus’ ministry encapsulated. He came into the world to restore what our sin destroyed through individual instances such as healing the blind, deaf, and lame, casting out demons, and raising the dead, as well as redeeming the world of sin. It is interesting to note that Jesus restores what sin destroyed in Bartimaeus’s eyes immediately before His triumphal entry into Jerusalem and passage to the cross.

Today, Jesus continues this ministry. He heals those struggling with physical and mental brokenness through the body’s natural immune system and healing ability, doctors and medicine, psychotherapists, and psychoactive medication. He heals our greatest illness—sin—through His death on the cross, the Word, and Holy Baptism, which all cure the blindness of our hearts, and through Holy Communion, which strengthens our faith and forgives sins. Jesus truly did have mercy on us!

Dig deeper into the Gospel of Mark with a copy of Concordia Commentary.