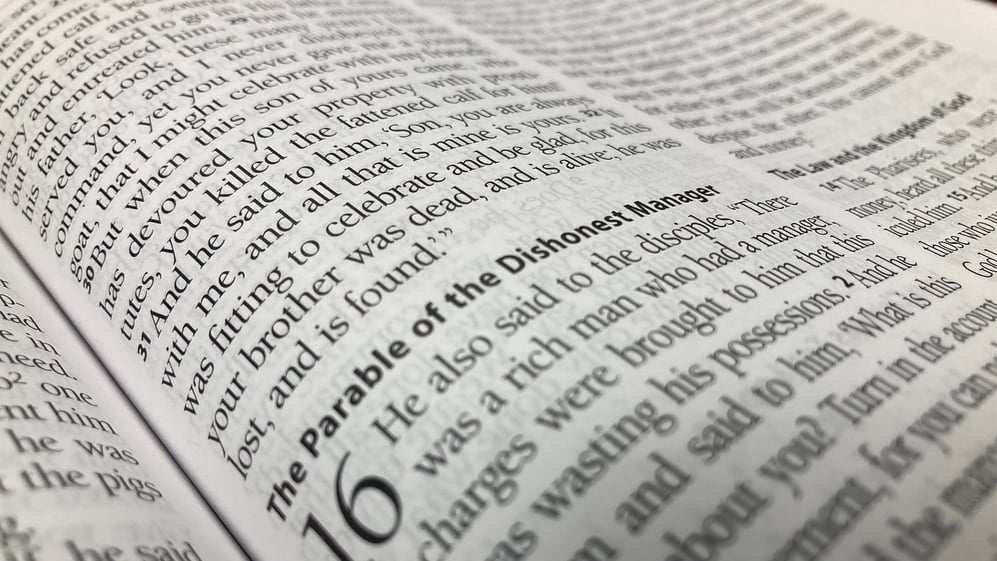 When I teach on the Seventh Commandment, “You shall not steal” (Exodus 20:15), I challenge students to come up with examples of stealing beyond theft, armed robbery, burglary, and the like. I am pleased when they can come up with less obvious examples like tax evasion, falsifying time cards, being late, or breaking a promise.

As with the other Commandments, I stress that breaking the Seventh Commandment is first and foremost breaking the First, “You shall have no other gods” (Exodus 20:3). The parable of the dishonest manager is an excellent example of this truth. While the sinfulness of wasting your boss’s wealth and cheating him is certainly apparent, this parable has much to do with committing oneself completely and firstly to God.

I have decided what to do, so that when I am removed from management, people may receive me into their houses.

Realizing that his job was gone and that he was unfit for another, the dishonest manager curried favor with the rich man’s debtors by reducing the amount each owed. There is some debate as to whether the manager’s actions were dishonest since the rich man could have been charging too much to begin with. Recall that Jews were not to charge interest to other Jews. To avoid breaking the Mosaic Law, the rich man may have overcharged the debtors to compensate for the lost interest. Either way, what is most important here is that the dishonest manager was committing himself fully to his own future rather than to the rich man.

The master commended the dishonest manager for his shrewdness. For the sons of this world are more shrewd in dealing with their own generation than the sons of light.

We are not told if the rich man sought recompense from his debt-lowering manager, but the master thought enough of the manager to commend him. Jesus’ message in this verse is simple: Christians should be as shrewd in stewardship as the dishonest manager was in dealing with the rich man’s debt. The sons of this world are unbelievers. The sons of light are Christians. It is important to keep in mind that Jesus is not commending or advocating dishonesty, even when such behavior helps the Church on earth. Rather, Christians are to be shrewd in stewarding all that the Lord has given them, whether it be time, talent, or treasure. Most important, we are to be shrewd in sharing God’s greatest gift, Jesus Christ.

Jesus seems to use the behavior of the dishonest manager for two different purposes. Earlier in the chapter, the Lord presented the dishonest manager as some who commits himself fully to one master. In these two verses, on the other hand, Jesus pointed to the dishonest manager to reinforce His point. If Christians are not faithful with what the Lord grants them in this world—that is, they are not careful to use the things in this world to serve God and His kingdom—then they are in danger of losing their faith in Jesus Christ, the salvation God freely offers. Again, the issue is one of commitment; Christians are to be faithful to the Lord in earthly gifts, and fully devoted to God in salvation. God should be first in all things.

No servant can serve two masters, for either he will hate the one and love the other, or he will be devoted to the one and despise the other. You cannot serve God and money.

Here, Jesus expands on His point by explaining why full devotion to the Lord is needed. There is no sitting on the fence. At the beginning of the parable, the dishonest manager was on the fence. On the one hand, he was serving, at least in part, the rich man, his boss. On the other hand, he was also wasting the rich man’s possessions. By the end of the parable, the dishonest manager was serving his own interests. This is part of what makes the parable challenging to understand. At first blush, it seems that Jesus is commending dishonesty. But in fact, Jesus is illustrating the need to commit fully to God as the dishonest manager became fully devoted to his own interests.

The Pharisees, who were lovers of money, heard all these things, and they ridiculed Him. And He said to them, “You are those who justify yourselves before men, but God knows your hearts. For what is exalted among men is an abomination in the sight of God.”

We don’t know how many, but Luke shares that some Pharisees were present among Jesus’ disciples. Jesus warned the Pharisees against their love of money and preoccupation with the approval of others. Thankfully, where the Pharisees’ interests were divided, Jesus was and is fully devoted to His Father in heaven. Jesus set aside His interests to serve His Father. Fully committed to obedience and our salvation, Jesus took on human flesh, lived a perfect life in that flesh, and then took it to the cross to pay for our sins. In Christ, God is fully devoted to us.

The parables from the Gospel of Luke are dissected by Dr. Arthur A. Just Jr. in Luke 9:51–24:53, Concordia Commentary.