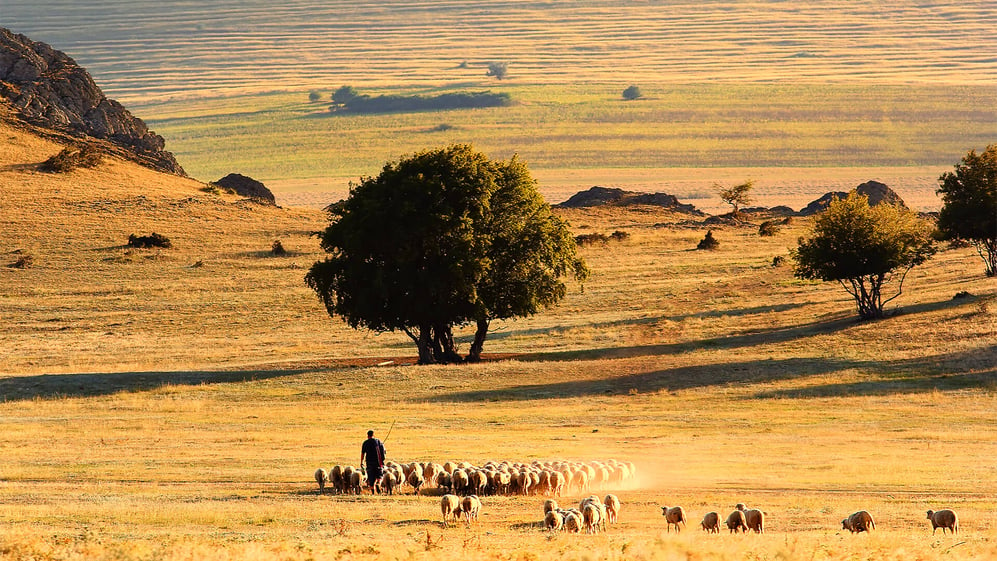 This blog post is adapted from Engaging the Psalms: A Guide for Reflection and Prayer.

Unquestionably, of the 150 psalms, Psalm 23 is the most familiar. It has been used on countless occasions, especially at funerals. It is still on the lips of many, in the version they learned from the King James Bible. Even those who are only Christian in name may know a line or two.

But how well do we really know this psalm? For further insight, it is worthwhile to dig into the subject of sheep and shepherds in the Bible.

Psalm 23 is just one place to find sheep and shepherds. The Pentateuch (the first five books of the Bible) contains numerous references to sheep. Beginning with Abraham, various covenants between individuals were sealed with the exchange of sheep or other animals (Genesis 21:27). Sheep were often listed among one’s possessions (Genesis 12:16; Job 1:3). Of course, sheep were used for sacrifice (Exodus 12:5; Leviticus 1:10). When the temple was dedicated, Solomon sacrificed 120,000 sheep in addition to thousands of other animals (1 Kings 8:63)!

As for the appearances of shepherds in the Old Testament, we are taken right to the beginning, where Abel, the son of Adam and Eve, is described as “a keeper of sheep” (Genesis 4:2). Jacob’s sons, the brothers of Joseph, were also shepherds (Genesis 47:3). Best known of all the shepherds, of course, is David, son of Jesse (1 Samuel 16:11).

Elsewhere, the words sheep and shepherds are used figuratively. When God spoke to Moses about his eventual death, Moses said, “Let the LORD, the God of the spirits of all flesh, appoint a man over the congregation, . . . who shall lead them out and bring them in, that the congregation of the LORD may not be as sheep that have no shepherd” (Numbers 27:16–17). By way of contrast, in the days of wicked King Ahab, the people were described “as sheep that have no shepherd” (1 Kings 22:17; 2 Chronicles 18:16). The parallel with the crowds following Jesus is impossible to miss: “When [Jesus] saw the crowds, He had compassion for them, because they were harassed and helpless, like sheep without a shepherd” (Matthew 9:36; see also Mark 6:34).

Time and again, the image of shepherd and sheep is used to describe the relationship of a leader to the people. David the shepherd was to be shepherd of God’s people (2 Samuel 5:2; 1 Chronicles 11:2). The prophets, too, were to be shepherds for God’s people. In Jeremiah and Ezekiel, much attention is given to this relationship. God condemned the prophets who were misleading the people: “ ‘Woe to the shepherds who destroy and scatter the sheep of My pasture!’ declares the LORD” (Jeremiah 23:1). God would not tolerate false shepherds. In the midst of the many condemnations, however, Jeremiah also delivers God’s promises: “I will give you shepherds after My own heart, who will feed you with knowledge and understanding” (Jeremiah 3:15); “I will set shepherds over them who will care for them, and they shall fear no more” (Jeremiah 23:4). Ezekiel also delivered a sharp denunciation of the false shepherds, concluding with this word of promise: “As a shepherd seeks out his flock when he is among his sheep that have been scattered, so will I seek out My sheep, and I will rescue them from all places where they have been scattered” (Ezekiel 34:12).

Christ took up the sheep/shepherd relationship in two primary passages. The first is the parable of the lost sheep (Matthew 18:12–14; Luke 15:4–7). Here, our Lord’s emphasis is on the responsibility of the shepherd who, through some negligence of his own, has lost one of his flock. The shepherd turns it around, as it were, and risks all to return the sheep to the fold. He invites his neighbors to rejoice with him, showing the sheep’s value in his eyes.

The second place where sheep and shepherd stand front and center in the New Testament is in John 10. Jesus calls Himself the Good Shepherd, making it plain that He is the Lord and Shepherd in Psalm 23. The relationship of sheep to shepherd is key, with the sheep following the familiar voice of the one who protects and cares for them. As in the parable of the lost sheep, the shepherd puts his very life on the line. He lays it down for the sheep (John 10:11). Mission comes into focus as Jesus speaks of other sheep who are not of the fold, sheep He must also bring in (John 10:16).

We could examine many other biblical passages. Some utter strong words of condemnation, while others present Gospel comfort. For God’s children, there can be no greater comfort than knowing that the Lord is their reliable and true Shepherd. In Revelation, this image is set in heaven itself, where the Lamb of God who takes away the world’s sin is also our Shepherd! “The Lamb in the midst of the throne will be their shepherd, and He will guide them to springs of living water, and God will wipe away every tear from their eyes” (Revelation 7:17). It would be hard to doubt that this was how David understood heaven when he wrote, “Surely goodness and mercy shall follow me all the days of my life, and I shall dwell in the house of the LORD forever” (Psalm 23:6).

Food for Thought: Shepherds in the Bible

New Testament scholar Kenneth Bailey spent four decades living and teaching in the Middle East. In Finding the Lost: Cultural Keys to Luke 15 (CPH, 1992), Bailey provides insights into the relationship of sheep and shepherds that bear on the interpretation of Psalm 23 and related texts.

One of his more interesting points concerns Jesus’ phrase about the shepherd laying the lost sheep on his shoulders to carry it home (Luke 15:5). When a sheep gets lost, Bailey explains, it becomes terrified. It sits down in the closest sheltered place, shaking and bleating. After it is found, it remains so nervous that it cannot stand, not even with the shepherd. The shepherd must carry the sheep on his back—up to seventy pounds of animal! In a real sense, the shepherd risks his own neck to save the sheep.

In the early centuries of Christianity, while crucifixion was still being practiced, crosses were considered too horrifying for symbolic use in worship. Often, the alternate symbol was a shepherd carrying a large sheep. Of special interest are several sculptures from this period in which the sheep is as large as or even larger than the shepherd. The sculptors knew that such proportions were inaccurate. The distortion was intentional. Just as the cross eventually became the symbol of Christ’s sacrifice, so this symbol of the shepherd carrying the large sheep reminded early Christians of the great price paid for their redemption.

Post adapted from Engaging the Psalms: A Guide for Reflection and Prayer copyright © 2021 Concordia Publishing House. All rights reserved.

Spend time learning about the Psalms with Engaging the Psalms: A Guide for Reflection and Prayer.