A Fictional Letter from Luther 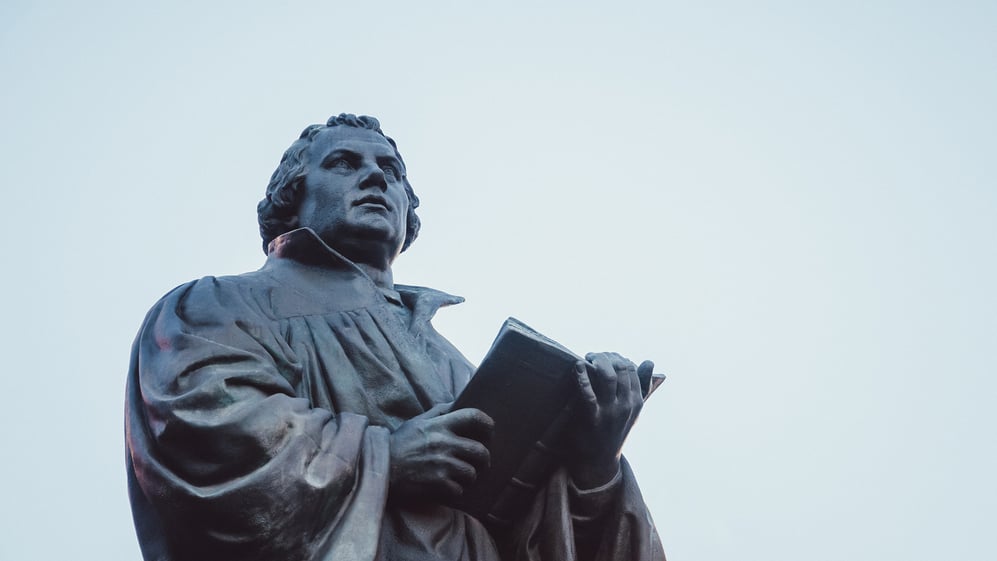 This blog post is an excerpt from Sincerely, Luther, our forthcoming set of fictional letters from Luther's perspective.

I must say that I am embarrassed that you have used my name to refer to the Church of Jesus Christ. Unfortunately, the use of my name in reference to the church began even in my own day. I objected as much then as I do today. I recall writing to my beloved people in Wittenberg when I was absent from them for several months. A rebellion had broken out among my supporters in late December 1521. That grieved me greatly. I wrote them a long letter, A Sincere Admonition by Martin Luther to All Christians to Guard against Insurrection and Rebellion. In that letter, I wrote, “In the first place, I ask that men make no reference to my name; let them call themselves Christians, not Lutherans.” I followed by adding, “How then should I—poor stinking maggot-fodder that I am—come to have men call the children of Christ by my wretched name?” That rebellion (I’ll tell you more about that sometime later) caused me to write an entire treatise, Receiving Both Kinds in the Sacrament. In that treatise I said, “True, by any consideration of body or soul you should never say: I am Lutheran, or Papist. For neither of them died for you, or is your master. Christ alone died for you, he alone is your master, and you should confess yourself a Christian.” Alas, it makes little difference what I think; people will do what they are wont to do, and my embarrassment continues.

I do sense a danger in the use of the name Lutheran, however. You may be so attracted to my name that you forget the priority of Jesus Christ, the Lord of the Church. You may even use my name to cut yourself off from others in the communion of saints. I grieve in my grave for there are those who identify themselves with my name who are no more Christian than Satan himself. They neither worship God nor receive the Holy Sacrament of Christ’s body and blood. They neither hear the Word, read the Word, believe the Word, nor live nor die by the Word of God. Even though they use my name, let them be accursed, because they already are.

I have identified myself above by the Latin spelling of my name, which I occasionally used during my professional career. (I use the term “professional career” only because you will understand what I mean by that phrase. I never used it, and I never would! Mine was a calling by God to be a faithful witness to the Word of God and to Jesus Christ, my Lord; I never considered my calling to be a profession.) My first name was given to me by my parents when they took me to the Church of Sts. Peter and Paul in Eisleben, Germany (the town in which I was born on 10 November) to be baptized by Pastor Bartholomy Rennebecher on St. Martin’s Day, 11 November 1483.

The family name was spelled several different ways. My grandfather Heine Luder spelled the name with a d. Other spellings in my day, including my own variant spellings, were Ludher, Lueder, Lutter, and Lauther. After 15 October 1517, I occasionally spelled my name Eleutherius (the free one). One of the first times I used that spelling was in a letter written in January 1518 to my friend Spalatin, chaplain in the court of my sovereign, Prince Frederick.

I should tell you a bit about my parents. I need say little about my mother, Margarethe, because little is known about her in your day. Perhaps that is my fault because I seldom spoke of her and made almost no reference to my ancestors on my mother’s side of the family.

My father, Hans (called Gross-Hans to distinguish him from his brother by the same name, who was called Klein-Hans), was a miner. When I was very young, my father worked in the mines around Eisleben. I was less than a year old when my family moved to Mansfeld. If you have difficulty with the geography of Germany, perhaps one of your German friends can be of assistance to you. In brief, those two towns are mostly south and a bit west of Berlin.

In Mansfeld, my father was a working part-owner of a mine. We were not wealthy, nor were any of the working class of my day. However, my family had modest wealth compared to my neighbors.

I spent my early years in Mansfeld. I’ll have to tell you about that on another occasion. I must now return to my rest, and you must return to your work of bearing witness to God’s saving truth against all the lies that the forces of darkness present to you and your neighbors in your day, just as those same forces were present in my day.

Want to read what happens next? Read the next four letters for free!