Why Music Is Important in Church According to Luther 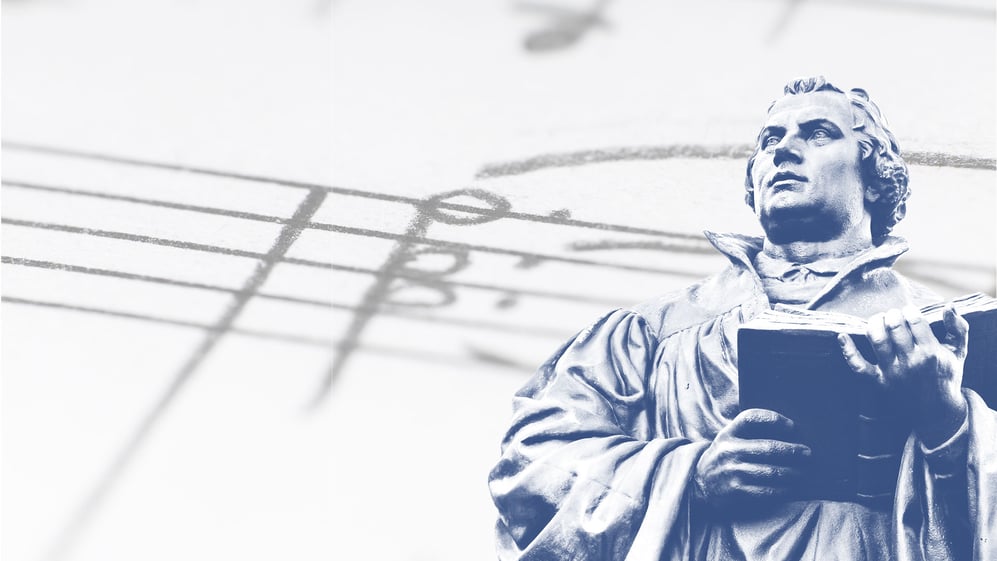 This post is an excerpt from Luther on Music: Paradigms of Praise by Carl F. Schalk.

No one considering the development of worship and church music in the Lutheran church of the sixteenth century can avoid facing squarely the pivotal role played by Martin Luther. He was important, however, not only because he was the focal point of a new theological movement. He stood, as well, at the center of a new musical movement that was to affect profoundly the church that would come to bear his name.

Whether in times of supreme joy or deepest sorrow, sublime happiness or bitter despair, Luther did indeed live “with music ringing in his ears.” This aspect of his life and experience was to shape in a most significant way the future of music in the life and worship of sixteenth-century Lutheranism.

The Power of Music

Martin Luther, the greatest of the sixteenth-century reformers, stands alone among the reformers of his day in affirming music as an excellent gift of God to be used in His praise and in the proclamation of His Word. Of all the Protestant reformers of his time, only Martin Luther unhesitatingly commended the use of music in the nourishment of the Christian life and in the worship of the church.

In contrast to Calvin, who only grudgingly permitted it a place, and Zwingli, who banished it altogether from corporate worship, Luther accorded music—next to theology—the highest place.

Luther’s views profoundly influenced all those who came in contact with him. Firmly rooted in a deep appreciation of the historic liturgy of the Western Catholic tradition, Luther instinctively came to understand through his own personal experience the exceptional power of music to move the hearts and minds of people.

Music for Both Musicians and Common Folk

From such a perspective he encouraged the teaching and singing of the most sophisticated musical forms of his day—Gregorian chant and polyphony—as well as simpler congregational hymns. The Latin Renaissance tradition, to which Luther was exposed in his life in the monastery and as a priest, had developed a sophisticated art music for the church with little, if any, music for participation by the people. The Calvinist Reformation tradition, following the lead of Calvin, the Geneva reformer, excluded art music of any kind in public worship, allowing only a simple congregational psalmody. In contrast to both of these traditions and practices, Luther and the Lutheran Reformation tradition encouraged and actively fostered in Christian life and worship a reciprocal interaction between art music of the most sophisticated kind and simple congregational song. A flourishing tradition of church music of great richness and depth resulted.

Such a unique view, reflected in various ways in Luther’s writings throughout his career, was undoubtedly shaped, in part at least, by his experience with music at home, as a young boy in the schools, and in his life in the monastery and as a priest. These experiences in Luther’s formative years, experiences to which he often referred in his later life, were crucial in the shaping of attitudes that reasserted themselves throughout his entire life as he sought to relate music in the life and worship of the church to his new understanding of the Gospel.

Luther’s views moved from music as a speculative science (musica speculativa) to music as a practical, performed art (musica practica). This change from the traditional late medieval view was a most significant and crucial—though little noted—step. Centering on the close association of music and the Word, Luther brought profoundly new insights to an understanding of music in the Christian life, freed it from a variety of ideas that restricted and confined its use in the praise of God, and made it a living activity as viva vox evangelii, as the “living voice of the Gospel.”

But of even greater importance in shaping his view of music was a developing theological perspective that was reflected in various paradigms—themes or patterns of thought—that appear repeatedly in his writings. Since Luther nowhere systematically expounded his views on the relationship of music to the life and worship of the Church, one must glean his ideas and thoughts about music from his comments in hymnal prefaces and liturgical and exegetical writings, from informal comments recorded by his friends and co-workers, and from various other remarks scattered throughout his writings.

The music that developed in the Lutheran tradition, particularly in the period from Luther to Bach, “is eloquent testimony to the fact that the church’s musicians and its people found that Luther’s views provided a healthy and wholesome context in which to work, to sing, and to make music in praise of God.”1 This legacy is a priceless gift to church musicians everywhere. It is a priceless heritage for the whole church.

1 Quote is from A Handbook of Church Music, page 16 © 1978 Concordia Publishing House. All rights reserved.

What else does Luther have to say about music?

Read about it in Luther on Music: Paradigms of Praise.