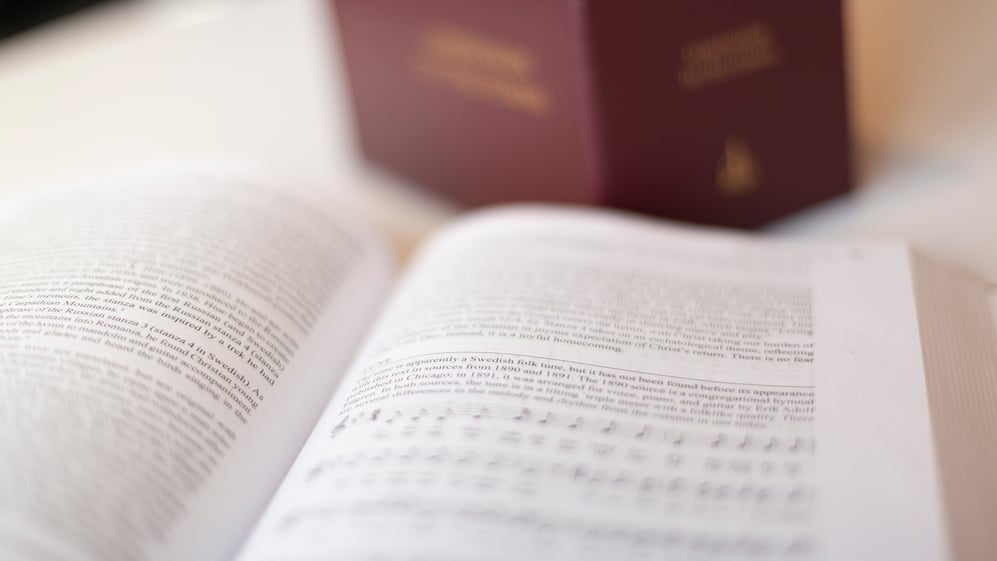 As we wait for the arrival of the Savior, here is a guest post from Rev. Dr. Jon D. Vieker, one of the three general editors of Lutheran Service Book: Companion to the Hymns, which originally appeared in the December 2019 edition of The Lutheran Witness.

It starts the day after Halloween. In some places, even earlier. I’m talking about the Christmas songs that permeate our commercial soundscape this time of year. From shopping malls to big box stores, from smartphones to the gas pumps, the signature sound of Christmas is song.

And it’s no wonder. Two millennia ago, Christmas itself began with a song. The angel’s announcement to the shepherds was followed by the first Christmas hymn: “Glory to God in the highest, and on earth peace among those with whom He is pleased!” (Luke 2:14). The church hasn’t stopped singing since, and even the world finds itself singing along.

But where did our Christmas hymns come from? Why do we sing them? How are we to understand them? What follows are six “myths” surrounding the hymns we sing at Christmastide.

Myth 1: Martin Luther got his Christmas melodies from tavern tunes.

This myth has been around for some time, and it’s fairly easy to disprove. Luther wrote thirty-seven hymns, three of which were for Christmas. In volume 53 of Luther’s Works, all of the texts and tunes for Luther’s hymns are available in English translation, along with a brief historical background on each. A quick reading of this volume shows that none of the tunes that Luther used for his thirty-seven hymns came from taverns. They were mostly existing church tunes, some of which he adapted, and the rest were original tunes of his own composition.

There is one slight exception, however—the original melody for his Christmas hymn “From Heaven Above to Earth I Come.” In the earliest known printing of this hymn, Luther’s text was set to a secular “garland song” melody. (A rough equivalent today might be a melody like “Ring Around the Rosie.”) And yet this popular melody never caught on in church, and four years later, an original melody by Luther was included instead with Luther’s text. This second melody is the one used to this day, found in Lutheran Service Book (LSB 358). Bottom line? The only time Luther tried using a secular melody (and hardly a “tavern tune” at that) was for a Christmas hymn, and that melody was soon replaced with one of his own.

This beloved cradle song has been attributed to Luther for more than a century. That’s probably because the first time it appeared was in 1884 in a Universalist magazine called The Myrtle, along with the note: “Martin Luther, the great German reformer … composed the following hymn for his children; and it is still sung by many German mothers to their little ones.” If you were to have asked any German mother in 1884 whether she knew this song and sang it to her children, her answer would most certainly have been “Nein!” Some fifty years later, there was a German version, printed in the United States, but it was clearly “reverse-engineered.” As one scholar notes: “Half an ear for natural prosody is sufficient to tell that the German is the translation, not the English.”

Myth 3: Christmas hymns should only be sung at Christmas.

In LSB, there are thirty-six hymns in the Christmas section. Although this is one of the larger sections, the Christmas season in the liturgical year technically runs only from Christmas Eve to Epiphany—the so-called “Twelve Days of Christmas.” That’s a lot of hymns for just twelve days!

Of course, some of our Christmas hymns find themselves being used during the season of Advent, just prior to Christmas. Some Christmas hymns may still linger into the Epiphany season that follows. And others may even show up in the middle of the Church Year, when the Christmas theme makes its appearance on such festivals as the Annunciation of Our Lord (March 25) or the Nativity of St. John the Baptist (June 24).

But there are a couple of hymns in the Christmas section that can be “repurposed” for use outside of Christmas. For instance, Isaac Watts originally wrote “Joy to the World” (LSB 387) to be a hymnic version of Psalm 98, above which he included the heading: “The Messiah’s Coming and Kingdom.” In other words, Watts envisioned this hymn as an End Times hymn, which could be sung at the end of the Church Year. Or consider the children’s hymn “God Loves Me Dearly” (LSB 392). Who would ever want to confine that hymn to the Twelve Days of Christmas?

Myth 4: Christmas hymns are light on theology and long on sentiment.

It’s true that many of our favorite Christmas hymns paint a vivid picture of the shepherds, the angels, the baby Jesus, and His mother—images that can evoke strong emotions and feelings of nostalgia. But it is also safe to say that the very best Christmas hymns have a strong confession of the faith—who is the Savior born in Bethlehem, and what has He done for us?

For instance, “Once in Royal David’s City” (LSB 376) was written by a future pastor’s wife to explain to children the meaning of the Apostles’ Creed where it says, “conceived by the Holy Spirit, born of the virgin Mary.” Paul Gerhardt’s “All My Heart Again Rejoices” (LSB 360) gets above and beyond the shepherds, the angels, and the manger to the “why?” of Jesus’ birth: “To redeem us He has given / His own Son / From the throne / Of His might in heaven.” And who would want to be without Charles Wesley’s deeply Christological confession: “Veiled in flesh the Godhead see, / Hail the incarnate Deity! / Pleased as Man with man to dwell, / Jesus, our Immanuel!” (LSB 380)? The confession of Jesus as Lord is deeply interwoven into the best hymns of Christmas.

Myth 5: Christmas hymns come only from England and Germany.

While it is true that a great many of our favorite Christmas hymns come from England and Germany, there are some notable exceptions. For instance, “Go Tell It on the Mountain” (LSB 388) is an African-American spiritual. “Now Sing We, Now Rejoice” (LSB 386) is said to have come directly from an angel in heaven (though it likely came from the pen of a Dominican mystic in Holland). And still other Christmas hymns hail from non-English and non-German sources: from France (“Angels We Have Heard on High,” LSB 368); Bohemia (“Let Our Gladness Have No End,” LSB 381); Spain (“Of the Father’s Love Begotten,” LSB 384); Poland (“Infant Holy, Infant Lowly,” LSB 393); and Turkey (“A Great and Mighty Wonder,” LSB 383).

Myth 6: There’s “no room in the inn” for any more Christmas hymns.

How does a new Christmas hymn break into an already overcrowded market of very popular songs? For a bunch of Lutherans with historically German roots, we may be perfectly content with our standard “Wir bleiben beim Alten!” (“We’ll stick with the old!”).

And yet, there are a couple of new Christmas gifts in LSB. Jaroslav Vajda’s “Where Shepherds Lately Knelt” (LSB 369) is set to a beautiful melody by his musical collaborator, Carl Schalk. This penetrating text and tune bring the singer to confess his Savior, face-to-face, in the manger—born “To die, to live, and not alone for me.” And Stephen Starke’s “O Sing of Christ” (LSB 362) puts into song the great Prologue to the Gospel according to St. John (John 1:1–18)—John’s version of the Christmas story, recorded elsewhere in Luke and Matthew.

The songs of Christmas are all around us. They carry God’s Word into our ears, and so into our hearts. Take time this Christmas season to meditate on the words of these great “psalms and hymns and spiritual songs, with thankfulness in your hearts to God” (Colossians 3:16). For therein dwells Christ, richly, for you.

For more Christmas hymn histories, be sure to order Lutheran Service Book: Companion to the Hymns below.

The Rev. Dr. Jon D. Vieker serves as senior assistant to the president of The Lutheran Church—Missouri Synod. With Joseph Herl and Peter C. Reske, he is also general editor of Lutheran Service Book: Companion to the Hymns.