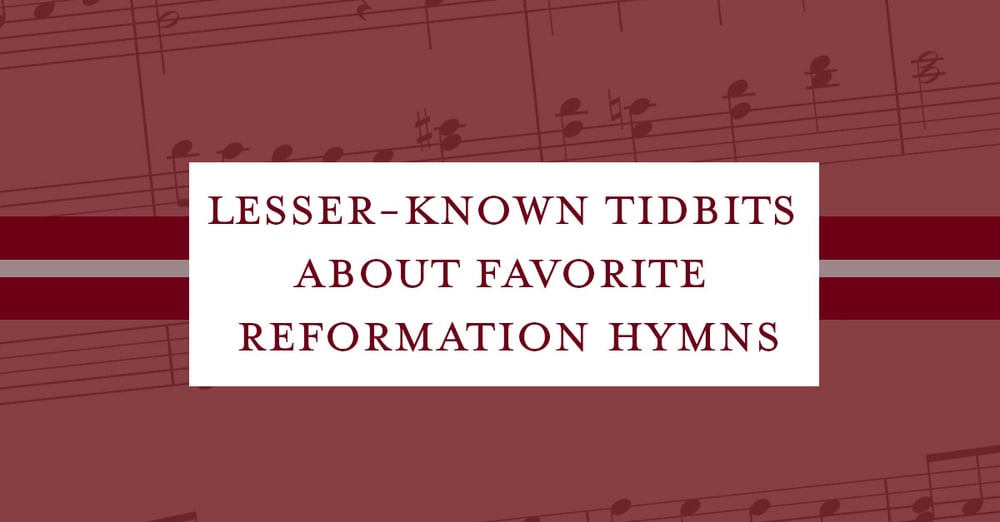 What’s the legend behind the tune for “Thy Strong Word”? What influenced the writing of “Lord, Keep Us Steadfast”? Learn these tidbits and more about some of the most well-known Reformation hymns.

“A Mighty Fortress Is Our God”

This hymn is often called the battle hymn of the Reformation, and it is even categorized under “The Church Militant” in Lutheran Service Book. However, Luther intended this hymn to be one of comfort. It is based on the words of Psalm 46 and is known for encouraging the faith of those who sing it. From what is known about Luther’s spiritual struggles, it is no wonder he wrote and sang a hymn like this.

In 1617, “A Mighty Fortress” was sung during celebrations of the one hundredth anniversary of the Reformation. By that time, settings of the hymn involved choir, congregation, and instruments, just like those we use today.

“Lord, Keep Us Steadfast in Your Word”

The year 1543 found the Holy Roman Empire and the Ottoman Empire at war, and Martin Luther published this hymn with the note “A children’s hymn, to be sung against the two arch-enemies of Christ and His holy Church, the Pope and the Turk.” So Luther was clearly influenced by current events when he wrote “Lord, Keep Us Steadfast in Our Word.”

Luther wrote this hymn fairly late in his life and it was one of the last hymns he wrote. The tune is possibly based on the same medieval chant that is the model for “Savior of the Nations, Come.” The translation we use in Lutheran Service Book is by Catherine Winkworth, who translated the hymn in the nineteenth century for her Chorale Book for England.

The tune for “Thy Strong Word” is called “Ebenezer,” and it is named after Ebenezer Chapel in Rhos, a village in southern Wales. But the tune is also known as “Tôn-y-botel” (“tune in a bottle”). Legend says that the tune was first found in a bottle that washed ashore on the Welsh coast!

When musicologist and professor Walter Buszin first learned of the tune, he ran across the yard of Martin Franzmann’s home and asked Franzmann to write a text for it. Franzmann wrote “Thy Strong Word” to go with the tune.

Not sure which settings to use of these Reformation hymns?