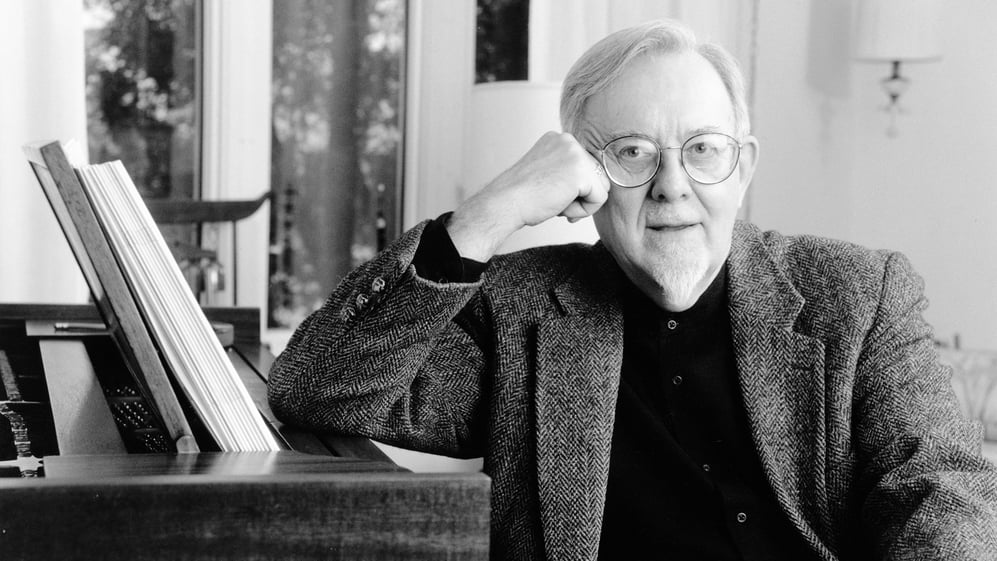 The life of Dr. Carl F. Schalk (1929–2021) is certainly one of the clearest and longest proclamations of the Gospel ever heard in the world of Lutheran church music.

He was a beloved husband, father, musician, writer, composer, and fervent advocate of the Lutheran Church. While Carl is dearly missed, he continues to sing the Church’s song, now proclaiming the Gospel of Jesus Christ in His nearer presence.

As Dr. John Behnke writes in the foreword of Carl F. Schalk: A Life in Song,

Carl Schalk is one of the top, if not the top, authorities on the theology and practice of Lutheran church music. His works in the field of church music, especially his books Key Words in Church Music and A Handbook of Church Music, often serve as textbooks for college courses. . . . And his choral compositions have been widely sung by all of God’s creatures, from the youngest children, to teens, to church choirs small and large. . . . Carl Schalk believes that the Church’s song should tell the story of salvation, proclaim Law and Gospel, and be sung by all of God’s people. This he has demonstrated by his life’s work.

And what a life’s work, indeed.

Carl Schalk attended Concordia Teachers College, River Forest (now Concordia University Chicago), graduating in 1952. His first call shortly thereafter was to Zion Lutheran Church in Wausau, Wisconsin, where he was a parish musician. Following in the footsteps of Paul Bunjes, he led choirs, taught music at the Lutheran grade school, and played organ on Sundays. Along the way, he met and married his wife of over 60 years, Noël Donata (Roeder) Schalk. Together, they have three children and several grandchildren.

Later, Carl earned his MM from the Eastman School of Music in Rochester, New York, followed by an MAR from Concordia Seminary in St. Louis.

Carl returned to Concordia University Chicago to teach church music from 1965 to 1994. While there, he influenced the creation of the school’s Master of Church Music degree program and continued to touch the lives of hundreds of students.

Lutheran Worship in the Twentieth Century

In addition to his teaching legacy, Carl Schalk had an impact on some of the most influential changes within the breadth and space of Lutheran worship in the twentieth century. He contributed to both Worship Supplement (1969) and Lutheran Book of Worship (1978), and was the editor of the Church Music magazine (1966–1980). In a 60-year partnership with Concordia Publishing House, Carl Schalk wrote many books, including these:

He also provided valuable insight through his essays in Lutheran Service Book: Companion to the Hymns (2019).

Most of all, Carl composed hundreds of hymn tunes, carols, descants, and organ and choral pieces. He was perhaps best known for writing the tune NOW with the hymn text “Now the Silence” by his frequent collaborator Jaroslav Vajda. His other hymn tunes, including ROEDER, FORTUNATUS NEW, MANGER SONG, and THINE, appear in dozens of hymnals used by most every denomination.

Even though Dr. Schalk is no longer physically present, his music, his faith, and his song continue to live and remain with the Church. What a precious gift for people in the present and for generations to come! Thanks be to God for His faithful servant, Dr. Carl F. Schalk.

Dear Christians, one and all, rejoice,

And with united heart and voice

Proclaim the wonders God has done,

How His right arm the vict’ry won.

In memorial of the life and legacy of Dr. Carl Schalk, a YouTube playlist containing some of his works has been compiled. Click the button below to listen.

Allison Lewis was a marketing content specialist at Concordia Publishing House. She is a native St. Louisan, a proud Mizzou J-School graduate, and a huge fan of Blues hockey and Cardinals baseball. Outside of work, Allison enjoys traveling, working out, book club, trying new recipes, and spending time with family and friends.