Composer of the Month: Charles Ore 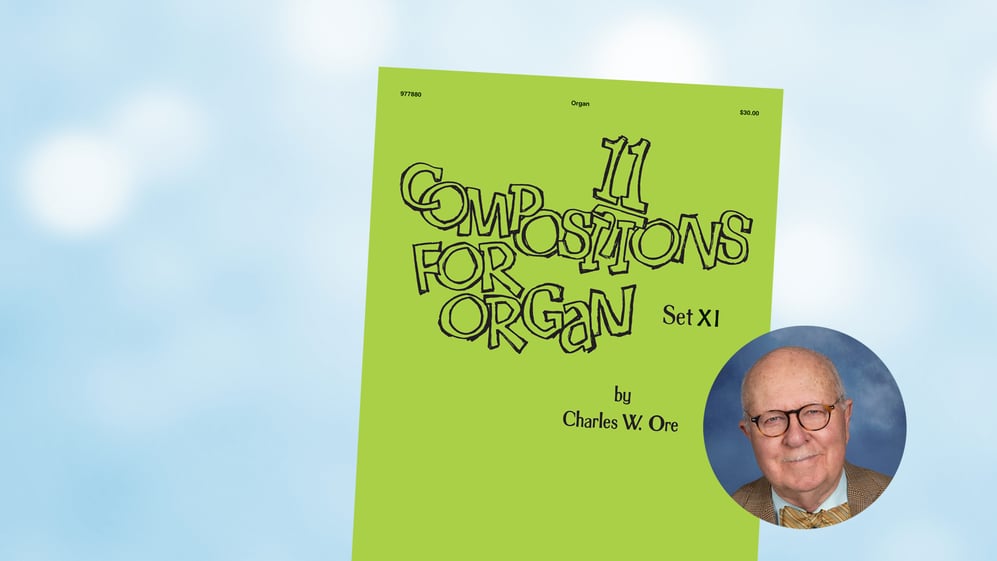 Charles Ore is a renowned organist, music teacher, and composer. His storied career spans more than sixty years, and his passion for liturgical music and education is unmatched. Ore’s notable work includes 11 Compositions for Organ and several choral pieces.

Dr. Charles W. Ore has been a stalwart in Lutheran liturgical music and music education for decades as a composer, organist, and instructor. He graduated from Concordia University in Seward, Nebraska, in 1958, and then received a Master of Music degree from Northwestern University in Evanston, Illinois, and a Doctor of Musical Arts degree from the University of Nebraska—Lincoln.

Before beginning a career in music, Ore said he didn’t know what to expect in deciding to pursue a life in liturgical church music.

“I was attracted to music, but a lot of other things as well,” Ore said. “I liked math and the sciences, and for a long time, I had thought about going into medicine. I was good at my other subjects, but I was much better at music. I was drawn to it.”

Ore began playing the organ as a teenager, filling in for churches on Sunday mornings where organists were needed. His grandfather, who was a pastor, would preach at various congregations, and Ore would act as his chauffeur and also play the organ at the churches they visited.

Since his teenage days of playing pump-action organs, Ore has richly explored the endless possibilities of sounds and textures that the organ is able to produce in a liturgical and musical setting.

Ore traveled to Europe for nine months soon after finishing his education, and there, he discovered plenty of ideas for a series of liturgical music he had begun publishing with Concordia Publishing House: 11 Compositions for Organ.

“Rather than calling them chorale preludes or hymn preludes, I called them compositions because I thought I wanted to not only enhance the repertoire of having pieces for church, but I also wanted to explore the organ as an instrument and how that instrument might also work in worship—because that was the endgame,” Ore said.

Volume one of Ore’s 11 Compositions for Organ was published in 1971, and in 2019, he published the eleventh and final volume. Developing the series over the course of forty-eight years allowed Ore to keep his compositions “fresh, unique, and progressing,” he said.

“The organ is always such a box of instruments. There’s so much that needs to be explored, and I still try to do it,” Ore explained. “I try not to use the organ in the exact same way. Over that period of time, I’ve explored the organ in many different ways. I’ve always tried to give it a unique or distinctive sound.”

In addition to his trailblazing work as a composer, Ore has had an impact on Lutheran liturgical music as a teacher and instructor. He said for young musicians anticipating a career in church music in any capacity, having a good teacher is an invaluable place to start.

“A good teacher will lead you to try various things. Think about it as being a cook—if you only had basic rice all the time, you really would not have explored a lot of what’s possible as far as taste is concerned,” Ore said. “If you explore and discover salt, sugar, pepper, vinegar, lemon juice, all of those other things, you begin to say, ‘I’ll never do that again,’ or you’ll say, ‘Oh, I think I could have more of that, that sounds great.’”

For organists playing on Sunday mornings, Ore said it is critical to keep in mind the ministry of encouraging congregations to sing, since the liturgy and hymns in church may be the only place a person sings throughout the week.

“Singing is not a natural thing in our society. On a Sunday morning, you really have to assume you’re reaching out to encourage something that they’re not familiar with,” Ore said. “They’re dependent upon you for lots of confidence. If the organist falters, they’ll cringe and climb under the pew when it comes to making music.”

That is just one among many things Ore has realized and contributed to liturgical church music in his sixty-plus years of serving in his various roles.

“From the time I first graduated college, I had my first organ position. I was twenty, going on twenty-one, and I’ve been playing ever since,” Ore said. “I’m now eighty-three, so I’ve got an idea. Many times, I’d like to think I’ve solved all the problems, but it convinces me I haven’t.”

Click the button below to preview one of Charles Ore’s Compositions for Organ, and considering adding it to your church’s worship music rotation.