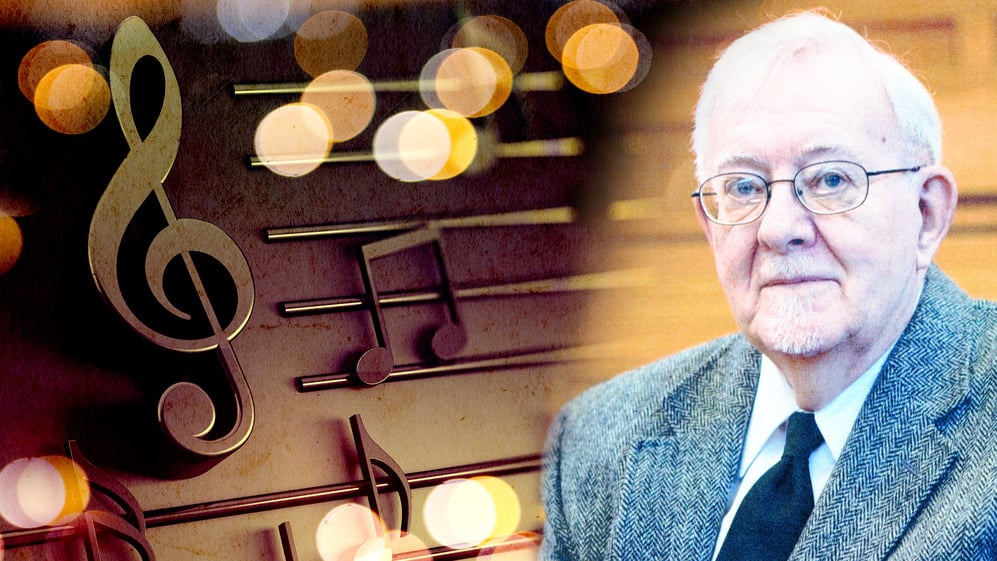 Dr. Carl F. Schalk has written more than one hundred hymn tunes, composed dozens of sacred choral pieces, and authored numerous books on liturgical worship. But what lies underneath the titles, tunes, and tempos is a man who has shaped decades of Lutheran music and church worship. His precise dedication to the liturgy of the Church guides his musical endeavors; and this zeal and diligence has molded generations of church musicians and laypersons and is sure to impact generations to come.

When asked what his favorite composition is, Schalk says, “That’s like asking someone who their favorite child is.” And how could he pin down a favorite? Among the multitude of hymn tunes he’s written, MANGER SONG (“Where Shepherds Lately Knelt”), FORTUNATUS NEW (“Sing, My Tongue, the Glorious Battle” and “Christ, the Lord of Hosts, Unshaken”), and NOW (“Now the Silence”) have already become beloved in many Lutheran congregations since the inception of Lutheran Service Book fourteen years ago.

This commitment to Word and Sacrament creates a narrow but rewarding opportunity for music to bolster the liturgy. But first, that requires the church musician to know the liturgy if he or she will choose appropriately when it comes to music.

“You have to know the liturgy—and not just intellectually, but by living it and doing it,” Schalk says. “Week after week, it becomes a part of you.”

Liturgy and music, which has historically come out of the liturgy, makes up the Church’s song. That song, Schalk says, is something the Church today is privileged to take part in, joining “with angels and archangels and with all the company of heaven,” as the Proper Preface in the Divine Service so beautifully expresses.

“The role of Kantor is first of all [to be] the carrier of the tradition of the Church’s song,” Schalk says. “He or she carries on the tradition that has been received. The act of handing on the tradition from one generation to another is part of the Lutheran tradition.”

Schalk also explains why the order and repetition of the liturgy is important and why the Church’s song adheres to it: “The point of those structures that help give shape and order of worship is that they were designed to help the proclamation of the Gospel. That’s why you have them.”

“In the Church Year, we annually rehearse and hear again the story of salvation from the creation through the coming of Christ and His death and resurrection and ascension, and that He will come again,” Schalk continues. “We hear that in an ordered way.”

The beauty of this order is seen in the story of Christ that Schalk mentions. The journey from the incarnation of Christ through Epiphany and his transfiguration to the table at the Last Supper and the cross at Calvary culminates in the resurrection of our Lord on Easter morning. When the Church’s song is united in this journey, the Gospel shines forth even brighter and points to Christ and His work for His people.

That proclamation is for the Church of all times and places, and the song the Church sings crosses all boundaries of time and place.

“The song of the Church is the Church’s song, which the Church has been singing long before we arrived on the scene and will continue to be singing once we’re off the stage,” Schalk says. “We in our time and place are honored to join in that song.”

To learn more about church music from Carl Schalk's perspective, order A Small Catechism: Understanding Church Music in the Lutheran Tradition below.