5 Fun Facts from the new LSB: Companion to the Hymns 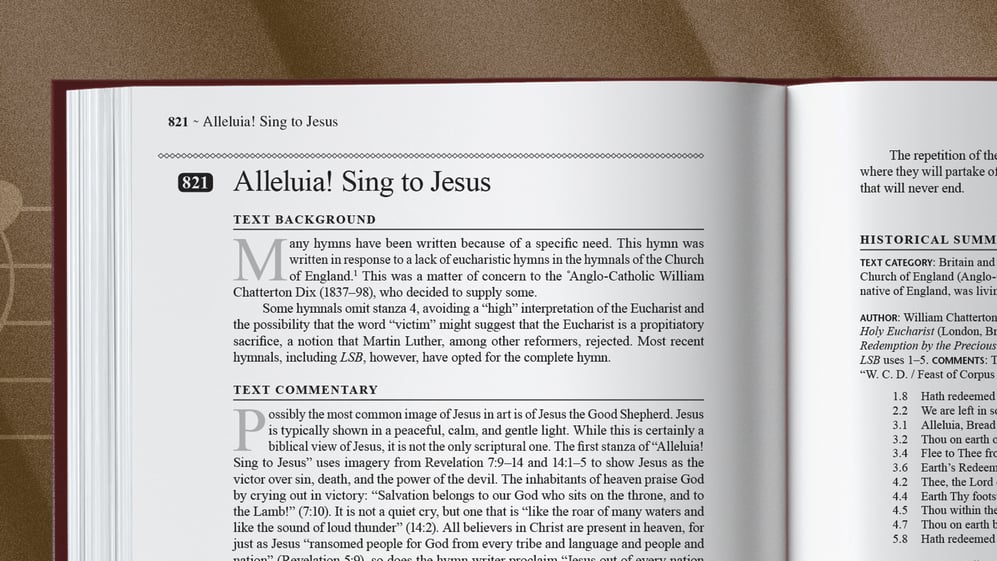 Have you ever wanted to know more about the history of the hymns in Lutheran Service Book? Do you ever wonder what the lives of those who wrote our hymns were like? Good news—we have a book for that. Everyone at Concordia Publishing House is incredibly excited to announce the launch of Lutheran Service Book: Companion to the Hymns. This comprehensive hymn companion is rich with compelling facts—many newly discovered through extensive research of original sources in libraries all over the world. We’ve picked our top five for you to check out today.

A secret message for the monarchy

John Francis Wade wrote the original four Latin stanzas to hymn 379, “O Come, All Ye Faithful.” Surprisingly, this well-loved hymn might actually contain a coded message to the monarchy. Wade, a supporter of the Jacobite cause that wanted “restoration to the British throne of the Catholic monarchy,” potentially created a coded message in the very first stanza—specifically the line “the king of angels”—as a call for Catholics to take over the monarchy again. “While this might be a hidden reference to Bonnie Prince Charlie, leader of the 1745 Jacobite rebellion, as the would-be-king of ‘Ang[e]lorum’ (the English), it is clear that Wade’s primary reference is to Jesus.”

Alan McDougall (1895–1966) had perhaps the most far-fetched and wild life of all the contributors to LSB. He mastered many languages, including Sanskrit, Latin, Greek, Russian, English, and French—all while never having attended university. During World War I, McDougall was arrested as a conscientious objector. His first book of hymns was published during his time in prison, but he was not allowed to read it until his release. He was also covered head to toe in tattoos (except for his left hand), before having them all removed later in life. He worked as an editor for various publishers, including one whose founder had grown tired of McDougall (under the name Glover) sending him corrections to already published materials, and simply hired him. For LSB, McDougall contributed the translation of hymn 881, “Christ, Mighty Savior,” stanzas 2 and 4.

While many hymns in LSB originated in Europe or the United States, a few exceptions come from elsewhere in the world. Almaz Belihu wrote hymn 542, “When I Behold Jesus Christ,” and decided to submit it to the Ethiopian Evangelical Church Mekane Yesus (EECMY) when she was only sixteen years old. After a long series of events, it was eventually published in 1977—first by Howard Olson before making its way to LSB. Today, the hymn is extremely well known in Ethiopia.


Bach, a Duke, and the royal court

Salomo Franck (1659–1725) wrote more than 330 hymns during his lifetime, two of which are included in LSB: hymn 719, “I Leave All Things to God’s Direction,” and 731, “O God, Forsake Me Not.” During his life, he held a government position in Zwickau, then became a secretary of the Schwarzburg ducal administration in Arnstadt. In 1701, he was given a position in the court of Duke Wilhelm Ernst. There, he was a court poet, librarian, and curator of the duke’s medals and coin collection. He wrote the librettos for most of Bach’s Weimar cantatas. He was also a member of the prestigious Fructhbringende Gesellschaft, which was the leading literary guild of the time.


Psalms for exiles and refugees

William Kethe, a Scottish exile, was a disciple of John Calvin and believed that songs should only be drawn directly from God’s Word, such as the Psalms. Kethe eventually wrote hymn 791, “All People That on Earth Do Dwell,”  and others for English refugees in Geneva. This hymn was a version of Psalm 100 and is also the oldest English hymn or psalm in common use today.


This is just a glimpse at the myriad facts and biographies that can be found in Lutheran Service Book: Companion to the Hymns. To read more, download an excerpt of the book.

Context on the translator and hymn writer is adapted from the Lutheran Service Book: Companion to the Hymns, Volume 2, pages 333, 500–501. Copyright © 2019 Concordia Publishing House. All rights reserved.

Order here to discover more facts and biographies of Lutheran Service Book and its hymns.