When a Pew Bible Leaves the Pew 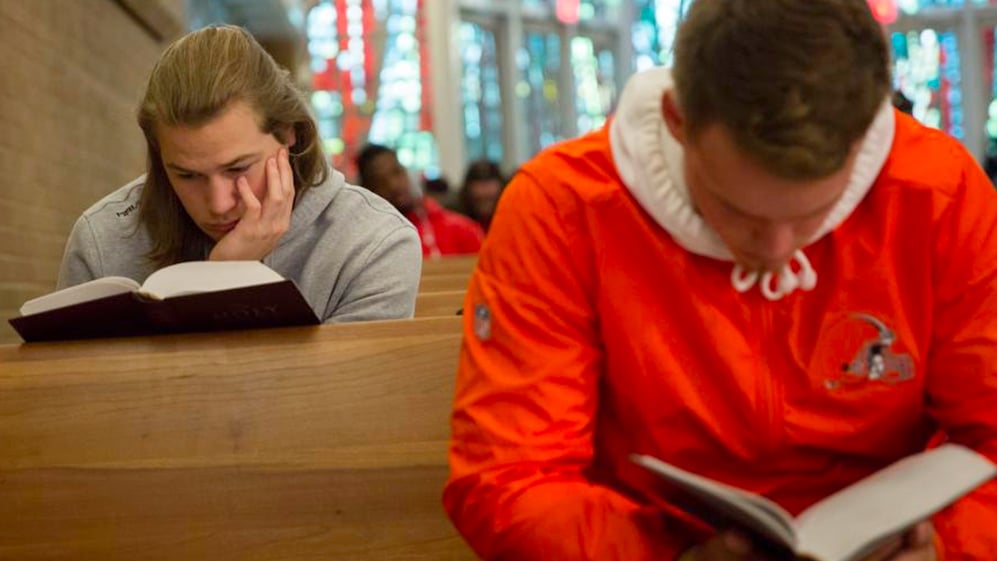 Concordia Ann Arbor has a problem.

They’re running out of Bibles in their chapel.

In daily chapel, students have to reach and climb over pews to snag a Bible, Hunger Games style, especially on athlete chapel day. No one wants to fight a collegiate athlete for the last Bible in their row, so most students end up sharing with their neighbor.

Linda Sproul, Director of Donor Relations at CUAA, described this “problem” to me (problem was clearly placed in air quotes, or qualified with an adjective such as fantastic or terrific). “Three years ago, we made the switch from NIV to ESV pew Bibles so everyone could literally be on the same page,” Linda said. “That change was accomplished with a crowdfunding video campaign headed up by then-campus pastor Ryan Peterson, who is now Vice President of Administration.”

You might think CUAA is running out of Bibles because they’re one of the fastest-growing colleges in the Midwest, enrollment has doubled over the past six years, and a new nursing program started in 2016.

That’s all true, but the problem is actually much simpler than that.

Students are encouraged to take the Bibles.

No, they’re not selling them on the dark web to earn some extra bitcoin, or collecting them to fill their shelves with books that have identical spines.

Students are taking the Bibles because they don’t have one of their own.

Meeting Jesus for the First Time

If you’re like me and didn’t attend a Concordia, you might think that every student who enrolls at one of the Concordia University System schools is a die-hard Lutheran who is going there to be a commissioned minister. But CUAA, like many other religious universities, enrolls students who meet Jesus for the very first time on their campus. Whether they attend because of a cutting-edge program or athletic scholarship, students are often brought to faith during their time at CUAA—and that often happens in the Chapel of the Holy Trinity.

Twenty-minute chapel services occur daily in the Chapel of the Holy Trinity—among expansive stained glass windows and a peaked ceiling that contains even more stained glass—and a variety of other services take place throughout the week. Chapel is well attended (an average of two hundred students attended each service in 2017), and as Lutherans we know that God promises to be present in worship.

For where two or three are gathered in My name, there am I among them. (Matthew 18:20)

At chapel, every student encounters God—the God who saves them, redeems them, and loves them. Regardless of where they came from or where they’re going, when they’re in chapel, they hear a message of forgiveness and love, a message that is contrary to what the world tells them. In chapel, they meet Jesus and begin to form a personal relationship with Him.

But students who didn’t grow up in the church don't have any way to encounter God in a real way outside of chapel if they don't have a Bible. Scripture is one of the other places God promises to meet His people, so if students want to “experience” God, they need only go to His Word. All Christians need access to God’s Word to better understand their Savior, His love for them, and His will for their lives.

No one knows that better than campus pastor Randy Duncan.

“Our campus ministry team has done a terrific job making all of our students aware that if they do not have a Bible of their own, they are welcome to take one from the chapel,” says Linda. “So here we are three years later, and praise God, we need a hundred Bibles to replace the ones that our students have claimed as their own!”

One hundred pew Bibles (that aren’t in the pews) are being studied in dorm rooms, highlighted in Bible study, and read in coffee shops.

One hundred students who didn’t have a Bible of their own now have the Word of God available to them 24/7.

One hundred lives are changed because of Christ.

Receiving and Giving Away More Bibles

Losing a hundred Bibles is certainly cause for rejoicing, but as Linda noted, new pew Bibles are needed to replace the ones that are now owned by individual students. And with a record-breaking freshman enrollment this school year, more Bibles are definitely needed.

A crowdfunding campaign is underway to fund the purchase of a hundred new Bibles for the Chapel of the Holy Trinity. With this fundraiser, CUAA hopes to replace all the Bibles that were “lost.”

When the new Bibles arrive, students will gather in the chapel, bless the Bibles, and place them in the pews. Gathering together as the Body of Christ, students and faculty will rejoice that God gives us His Word and that His Word is (literally) filling this place.

But even as they celebrate having pews filled with ample books of Scripture, campus pastor Randy Duncan will reiterate the same call he always does at chapel:

“Take a Bible if you need one.”

You can play a part in bringing students to Christ at Concordia Ann Arbor!