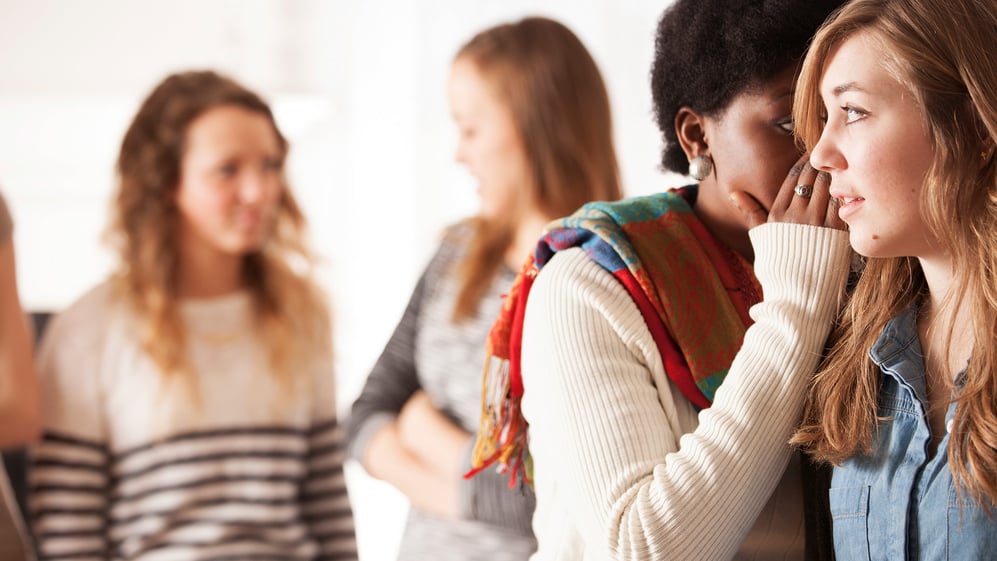 This post is an excerpt from my newest Bible study, Shine: Sparkling with God’s Love.

Toxic friendships can cause so much darkness in your world. They can make you feel angry, frustrated, vengeful. How can you, as a young Christian woman, deal with these friendships in a way that reflects God’s love? Here is an (incomplete) list of some toxic friendships and how you can rely on God to help you share His love with friends who need it.

Of course you’re aware that this particular friend has some issues. She loves telling you all the dirt—the problem is that most of it is so mean. Also, she can’t be entirely sure any of it is actually true.

The real problem is that her stories are so interesting. How else would you learn that your geometry teacher is actually gay and your former best friend is probably anorexic and your crush cheats to pass biology?

If you’re being honest, it kind of makes you feel better about yourself to know everyone else has these big secrets.

Except all this comes crashing down when you find out that your gossiping friend is actually telling your secrets too. She’s on text threads separate from you, and when you’re scrolling through her phone, you find the secret you told her about your parents not speaking to each other.

So what to do now?

Revenge storytelling about this particular friend would feel so very sweet.

But you realize that gossiping can do serious damage (and besides, there’s a whole commandment about it).

You will need God’s help to forgive. Ask Him to help you deal with your anger, for discernment in confronting her, and for the wisdom not to get wrapped up in her gossip in the first place. Ask God for an exit strategy the next time she starts to spill the tea so you can tell her that you don’t want to be part of it.

True, this friend does like to be in charge. But she’s also the very best at organizing you and your life.

With a friend like this, you always know what’s expected of you. Usually that is that you should do what she tells you to do: Call me at exactly eight o’clock. . . . Meet me for lunch right in our spot and right on time. . . . Remember that I hate when you bring turkey sandwiches because the smell makes me nauseous.

Life gets a bit tricky with your friend when you don’t follow the rules exactly as she would like.

What can you do, except try to tell her your side of the story?

But then, also use this as an excellent chance to take a good look at yourself and remember that you can be friends with the kind of girl who needs the world to operate on her schedule—but without letting her take your entire identity from you. You, dear one, should never be a prop in her incredibly organized life.

This will take some work, so go back to the Lord, back to who He said you were when He claimed you in your Baptism, back to His Word. Remember your heavenly Father’s promise that He has adopted you as His daughter exactly as you are.

This is nice—a new friend. She appears overnight as The One Who Is Suddenly There All the Time.

Where, oh where, has this friend been all your life?

She really “gets” you. Suddenly she’s calling you, just when you’ve had the worst day. She’s inviting you to get Starbucks with her and texting you really funny memes, and she truly seems to care about your weird love of synchronized gymnastics videos on YouTube.

Until it all becomes clear. And once you see the REAL REASON she’s been the very best friend, you can’t believe you ever believed she was genuine. It’s your brother she’s really trying to get to know better—as in, get to know him as his new girlfriend.

But maybe you don’t have to react with the same self-centeredness. Perhaps you can tap into a kinder, more balanced approach to friendship and talk to her about how you really hope the two of you can stay friends long after your brother announces he would never date one of his little sister’s friends.

Try it and see where it goes. If you’re meant to become the kind of friends who stick together, that will probably become obvious. If not, you might be better investing a little more in friends who will be by your side all the time—not just when they need a favor.

She is on the swim team with you, and you spend hours every week at the pool, pulling swim caps over each other’s hair and talking about your split times.

But really, you end up spending lots of the practices assuring her that she looks just fine in her bathing suit, that she does NOT in fact swim like a bloated sea turtle, and that it is ridiculous to believe that the coach hates her.

Total honesty? You kind of love that you can make her feel so much better about herself. You’ve actually become pretty good at talking her out of her insecurity. You can pep-talk her into the pool every single day. It works so well that she seems to have become a tiny bit dependent on you.

It also gets to be exhausting to always be the wind beneath someone else’s wings. For just one day, you would like to NOT be a personal cheerleader.

Maybe you could share a little about Jesus with her. He won’t exactly be there to tell her that it’s okay if she’s the slowest at backstroke.

Or actually, maybe He will be there. Because you know the power of prayer, and the Bible does say that the Lord is right there with us when we’re scared (Psalm 34:18).

So, it’s probably worth a try to share all this with her. You might lose your job as SAVIOR TO THE INSECURE . . . but that’s probably better anyway.

5. The Friend Who Says She Loves Jesus (but Doesn’t Seem To)

What a strange friend this one is.

She’s the lead singer of the praise band, the one who argues against abortion in the schoolwide assembly, and the girl who quotes Bible verses to the kids who vape in the bathroom.

You want to really like her, and you totally admire her confidence, but sometimes she isn’t very nice.

At first, you thought all the praying for sinners around the flagpole and going to church three times a week would be an inspiration for you. But this friend is actually kind of hurtful to anyone who doesn’t meet her standards. Also, lots of days it seems like it’s very important for her to keep everyone’s focus on her. That’s not right. Shouldn’t the focus be on God?

Remember the Pharisees in the Bible? This was pretty much their deal too. Big, grand shows of religion—then cruelty to real, actual people. They loved to prove how holy they were, but they were not so hot on pretty much everything that Jesus was saying and doing.

Your modern-day Pharisee friend needs to see what God is all about. God never tells us that we are winning at Christianity when we obey His rules perfectly. In fact, He tells us the opposite. Part of living as a Christian includes how you treat those who have the least to offer; you know, the ones who are usually invisible to everyone else (James 1:27).

So, yes, your friend who is making a big show of praying for sinners probably needs prayer herself. Ask Jesus to help you lead by example and love everyone.

It’s not entirely clear what she’s so mad about, really.

This is your friend who has a chip on her shoulder roughly the size of every person who has ever let her down.

She remains ready for anyone else to let her down—specifically you. Even though you really don’t want to disappoint her, she takes it all very personally when she gets the idea that you might be a tiny bit less than loyal to her.

There’s also the constant problem of her deciding she doesn’t like whole groups of people. (For example, the workers at the pet shelter—who doesn’t like people who take care of homeless puppies? And she is convinced the old guy at the smoothie place hates kids. Really, he probably doesn’t like how you and your friends never tip, but whatever.)

With friends like this who are angry or bitter or negative, ask God to help you keep your own identity. He might even decide to heal your friend’s deep anger issues. Or maybe not. Just remember that she might have major issues with the cafeteria workers, but you can still smile at them as they hand you a tray of meat loaf.

Okay, you’re old enough to realize that there is no perfect friend. Seriously.

From what you’ve probably discovered, friends are actual humans—selfish, insecure, trying really hard, and also working to figure out how to do a bit better. There will be lots of ups and downs with friends.

But here’s the good news: God can—and will—work in the middle of all these relationships. To be clear, Jesus hung out with a crazy crew of sinners. Consider this: one of His friends decided to turn Him over to His enemies. This was Jesus’ actual life, and yet, He never sinned. He just kept showing His friends that there was a better way.

Through all of your friendships, keep your eyes on Jesus’ perfect standard. You’ll see so many examples of how to love your friends well—even when one of you is off the rails with selfishness or gossip or insecurity.

Also, of course, forgiveness. Learning how to forgive those who keep letting you down is hard, but your time here on earth is forgiveness school, and you’ll get plenty of chances to learn this lesson.

You’ll need God for that part. Ask Him for help forgiving and for giving second chances. Thank Him for forgiving you too.

Because this is your Lord—and He is so good at grace.

You can shine the Gospel of Jesus to others.

In the six-week Bible study Shine: Sparkling with God’s Love, you’ll find stories, journal prompts, and discussion questions to help you see what God’s sparkle looks like in your life.

Christina Hergenrader grew up in Galveston and now lives in Houston, Texas. She is wife to Mike and mother to Catie (16), Sam and Elisabeth (twins, 13), and Nate (10). Her rescue greyhounds are the laziest animals alive. She is the author of eleven books, which include God Loves Moms, Love Rules, Family Trees and Olive Branches, and Last Summer at Eden.