Spiritual Warfare in the Church

Exorcisms, demon possessions, and evil spirits are not just scare tactics used in the latest horror movie. They are very real, and Christians are in a real battle.

In I Am Not Afraid, Rev. Dr. Robert Bennett gives a fascinating firsthand account of the spiritual warfare found within the Lutheran Church of Madagascar. Is spiritual warfare something new to the Church? Bennett reviews what the Bible, Church Fathers, and contemporary Lutheran leaders have to say.

How did you first become interested in the Church of Madagascar?

While working on my Masters of Sacred Theology (STM) degree at Concordia Theological Seminary, I had the opportunity to meet The Reverend Doctor Joseph Randrianasolo who was a visiting student from Madagascar. After listening to him speak about the Lutheran Church of Madagascar, I became very interested in the church body and the growth (from one million members to over four million) it had seen over the past ten years.

Why did you decide to write I Am Not Afraid?

Originally the material in this book came from my dissertation research as I was pursuing a PhD in Missiology. Although, I had always intended that it would be rewritten into a book at its completion. My real desire to write on the topic of demon possession and spiritual warfare came from my disappointment of not being able to find any good resources on the topic while in seminary. Back in those days the subject of demon possession and spiritual warfare was acknowledged but never expounded upon. The sources that could be found were littered throughout various books but not accessible under one cover. Therefore, I would say that I wrote I Am Not Afraid because it was the book I wanted to read but could never find. Moreover, I wanted to provide a resource that would be accessible to both pastors and members of churches.

Describe one of your most unique experiences while visiting Madagascar.

The most unique experience I had while researching the book was when I was exposed to an unexpected exorcism. I was at an outdoor gathering of the church that had more than 15,000 people attending. I was watching from the sidelines as the exorcists were claiming the place for the worship of Jesus. I chose a place to take pictures and video as the “exorcism of place” began, but I decided that I could not get a good view from the location. So, I moved to a better location. Soon I found a good spot to shoot the video. It was my first time at such an event. As I took my place between two buildings, I noticed a woman with children sitting before me on the ground, watching the event. When the pastors started to speak the words, “Depart in the name of Jesus,” a woman began screaming and rolling around on the ground. At first I thought it was coming from the crowds of thousands before me. It took a few moments for me to realize it was the woman sitting at my feet. I must say I was unnerved by the whole thing, but I turned my video camera on the woman as a number of exorcists encircled her and began to direct their words toward her.  I remember praying the Lord’s Prayer as I watched the exorcism take place just a few feet away from me. Within about fifteen minutes the demons were driven away and the woman was back in her right mind. The pastors then spoke to the woman, who was not a Christian, and invited her to become a baptized Christian and join the Church. I don’t know what became of that woman, but many people who I have interviewed in the book have similar stories and are now church leaders and even pastors in the Lutheran Church of Madagascar. I think that constitutes a unique experience. . . .

Why are exorcisms common practices in Madagascar but so foreign to many other countries? 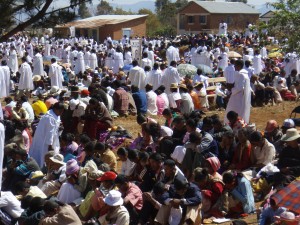 This question is flawed because exorcisms are actually not as foreign as one might think. Exorcism can be found almost everywhere in the world. Moreover, it dates back to the beginning of history. The problem is that due to secularization and rationalistic thinking, people in modern society have been taught that it does not exist. Yet, the Church has continued the tradition of exorcism throughout its existence. C. F. W. Walther, the first President of the LCMS, advised all of the pastors he instructed that they should expect to deal with demon possession and be ready for the possibility of exorcism. It is only within the past one hundred years or so that Lutherans have begun to lose this teaching. I demonstrate this in my book.

Why should Americans read this book?

American society is continually leaving the Church. Because of secularization, many people feel that the Church no longer has mysteries to offer. Others are looking for answers that the Church has forgotten. Almost monthly I receive phone calls or emails from pastors who are looking for help with the spiritual problems of their members. Most of the time the pastors speak of demons that are harassing their members, sometimes they are concerned with demon possession, but they all face the problem of finding good resources. Most of the books published on the topic of demon possession and spiritual warfare are not helpful because they are either unscriptural or sensationalized. I Am Not Afraid has been carefully written to avoid these common problems and provide clear instruction to those seeking assistance in these areas.

Our country is also experiencing a spiritual change as it moves out of the churches and into the idea of individual spirituality. Recently I was reading How Christianity Changed the World by Alvin Schmidt. Schmidt does an excellent job of demonstrating how Christianity has changed things over the centuries, but almost everything that Christianity has changed, it seems to me, is beginning to be reversed. If this is the case, we in America will no doubt be seeing an increase in the satanic as people continue to search for spirituality apart from Jesus and the Church. 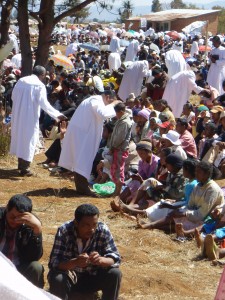 What can readers hope to gain from the information found in your book?

By looking at the situation in Madagascar, the reader is able to focus on a different culture and witness how Christianity, specifically Lutheranism, is bringing the Gospel message of life and salvation to a people who are following demons disguised as ancestors and spirits. In the interviews, the readers will discover that the people are now thoroughly Lutheran in their theology. If the book were to stop there it would be worth reading, but it does not stop there. The book continues to review all of the Gospel accounts of Jesus’ and the Apostles’ interaction with Satan and his demons. The book then goes on to learn from Lutheran theologians such as Martin Luther, C. F. W. Walther, and modern-day theologians. Throughout the book, comparisons are made between American life and the life of those in Madagascar. Soon the reader comes to the understanding that the book is more about them than it is about their brothers and sisters in a far away land.

How do you hope this book will benefit the Church?

As Lutherans, we have the great gift of knowing Jesus and the power of His name. We understand that Jesus, through the Holy Spirit, has promised to act when His Word is proclaimed. Exorcism for us should be much like the proclamation of Absolution. Pastors and laity speaking the Word while trusting that Jesus is the One who is acting to bring freedom, release, forgiveness, and life to the baptized children of God.  The problem we have faced in our Church is that we fail to recognize the continued work of Satan and his demons in our midst. It is my hope that this book opens up a conversation and leads the Church to speak boldly the command of Jesus to those who have been mislead by the ways of Satan.