In Memory of Louis Brighton 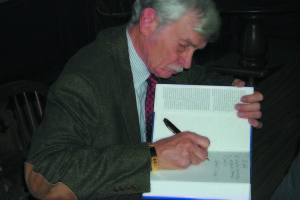 Dr. Louis Brighton entered eternal glory with Christ on Friday, November 13, 2015, at the age of 88. He was a pastor in London, England, and Decatur, Illinois, before serving as a professor at Concordia Seminary, St. Louis, from 1974–1998. His commentary on Revelation was published in 1999 in the Concordia Commentary series. This excerpt from his commentary (pp. 177, 199–201) explains the vision of the church triumphant, whose ranks he has now joined, waving palm branches and singing, “All the salvation is with our God, who sits on the throne, and with the Lamb” (Rev 7:10).

“These are those who are coming out of the great tribulation, and they have washed their robes and made them white in the blood of the Lamb. On account of this they are in the presence of the throne of God, and they worship him day and night in his temple, and the One sitting on the throne will spread his tent over them. They will never again hunger nor ever again thirst, neither shall the sun smite them nor any heat, for the Lamb, who is in the midst of the throne, will shepherd them, and he will lead them to fountains of the waters of life, and God will wipe every tear from their eyes.” (Rev 7:14–17)

The Complete Church in Its Eschatological State

The people in the great crowd which John sees before the throne of God in heaven have already experienced “the great tribulation” and have come out of it. … Christians are continually emerging from this tribulation, adding to the crowd in heaven. John is looking at the whole people of God entering and becoming the church triumphant. The crowd that John sees represents the whole church as if it were already triumphant, as if it were already compete, as it will be at the resurrection at the End. In contrast, the souls of those who had been martyred, which John saw in heaven at the foot of the incense altar, were not yet complete in number (6:9–11). Also only their “souls” (6:9) were mentioned, which implied that the resurrection of the body had not yet taken place, while in 7:9–17 no such differentiation between body and soul is made concerning the great crowd before God’s heavenly throne. This suggests that the great crowd of the church triumphant is complete in number, but uncountable. John is looking at the church in its eschatological state, which state the souls of all Christians enter the moment of their death and which is consummated at the resurrection of the body at the End.

The crowd of saints comes out of the great tribulation victorious because of the blood of the Lamb (cf. 15:2–4). They had “washed their robes and made them white in the blood of the Lamb” (7:14). Because of the redeeming death of Jesus Christ and because he now as the victorious Lamb presents them to the heavenly Father, the crowd of people stand pure and holy in the presence of God (cf. Rom 3:21–26; Heb 4:14–16). With sins forgiven by the blood of Christ (1 Jn 1:7–9; 2:1–2), and covered now with the righteousness of the Lamb (Rom 3:22; 10:4), they share in the victory of the Lamb before the heavenly Father. The active Greek verbs “washed” and “made … white” (7:14) with the people as the subject suggest that the saints did the washing. They were the recipients of God’s grace, with the result that as they held to Christ in repentance and faith, they “washed” their garments and “made them white” in his blood by means of Word and Sacrament. Yet there is not contradiction between passages that speak of Christians washing their robes (Rev 7:14; 22:14) and those that refer to Christians washing themselves or being washed. Since salvation is by grace alone, it is impossible for a person to wash himself or his clothes so as to (actively) achieve the forgiveness of sins (e.g., Jer 2:22; Job 9:30–31). God alone can turn scarlet sins to “white” (Is 1:18). God must wash the sinner clean from sin (e.g., Ps 51:2, 7 [MT 51:4, 9]; Is 4:4), as confirmed by the baptismal language about God’s “washing” of his church (Eph 5:26; Titus 3:5). Therefore when God calls for people to wash themselves clean from sin (Is 1:16) or “be baptized and wash away your sins” (Acts 22:16), and when Christians are described as having washed their robes (Rev 7:14; 22:14), it is always with the theological understanding that God is the one who instills the desire, prompts the action (Phil 2:13), and accomplishes the result: forgiven sins and eternal glory.