Music of the Month: Three Lenten Chorales for Organ 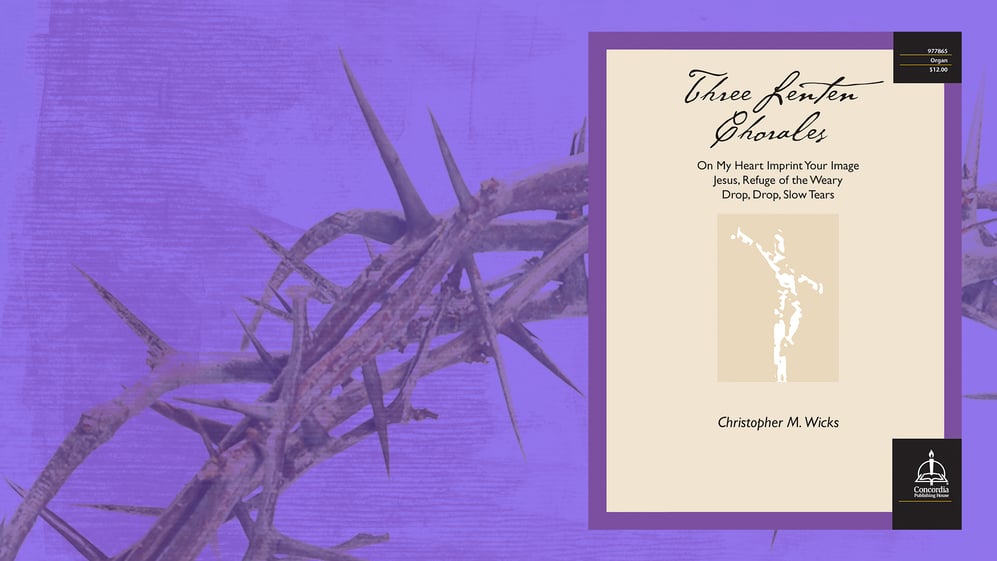 A set of Lenten chorale preludes based on themes of repentance, Christopher M. Wicks’s settings are composed in variation style and are inspired by Bach’s partitas and the Orgelbüchlein.

These chorales will be useful for the church organist in the upcoming season of Lent. Since each chorale contains variations on the melody, the organist has many options when it comes to deciding how to introduce, highlight, or color the melody of any of the three tunes.

On My Heart Imprint Your Image

The first of Wicks’s chorales featured here is on the tune DER AM KREUZ. Containing three distinct variations, it begins and ends with a reflective playing of the tune. The score calls for flutes and strings from the swell division of the organ to color this portion of the chorale.

The second variation switches to 6/8 meter, and the tune is sounded again—this time using flutes from the great division in the upper register. This variation adds urgency to the tune and prepares the listener for the third variation.

The third variation incorporates the pedal, as it features the melody with a strong reed. The score calls for the manual to be colored with a principal chorus, adding motion and grandeur to the cantus firmus.

The chorale concludes with a return to the first variation, appropriately reinforcing a decidedly Lenten tone at the end.

Jesus, Refuge of the Weary

Wicks’s second chorale is on the tune O DU LIEBE MEINER LIEBE. This chorale, like the previous one (DER AM KREUZ), contains three variations. The first variation is again repeated at the conclusion of the chorale.

The first variation of the tune features the melody played on a solo oboe stop. If an oboe is unavailable, a similar soft reed would be sufficient to create the reflective tone of the first variation.

The second variation of the tune is written in 9/8 meter, and it calls for the flutes and strings in the swell division. It continues the reflective tone of the first variation while serving as a nice interlude before the third variation.

Much like the first chorale, the third variation uses a principal chorus and opens up the hymn tune, both in volume and grandeur, for the first time in the chorale.

The chorale concludes with a return to the first variation, where the solo oboe sounds the melody again with an undoubtedly Lenten feel.

Wicks includes a chorale on SONG 46 in this Lenten collection. Though it may be unfamiliar in some Lutheran musical circles, this tune by Orlando Gibbons has roots in early seventeenth century English sacred music. The hymn “Drop, Drop, Slow Tears” was written by Phineas Fletcher, who was a contemporary of Gibbons. Wicks captures this short but poignant Lenten tune in a similar fashion to his first two chorales.

Once again, the beginning and end of the chorale introduce the tune with flutes and strings. The nature of the tune is drawn out, and Wicks keeps the voices underneath the melody moving along to give the chorale a sense of forward motion.

After two variations, the third variation again opens up with the principal chorus of the organ, and the pedal plays the melody as the upper voices rise and fall along with the melody line.

To order Three Lenten Chorales for Organ, click the button below.