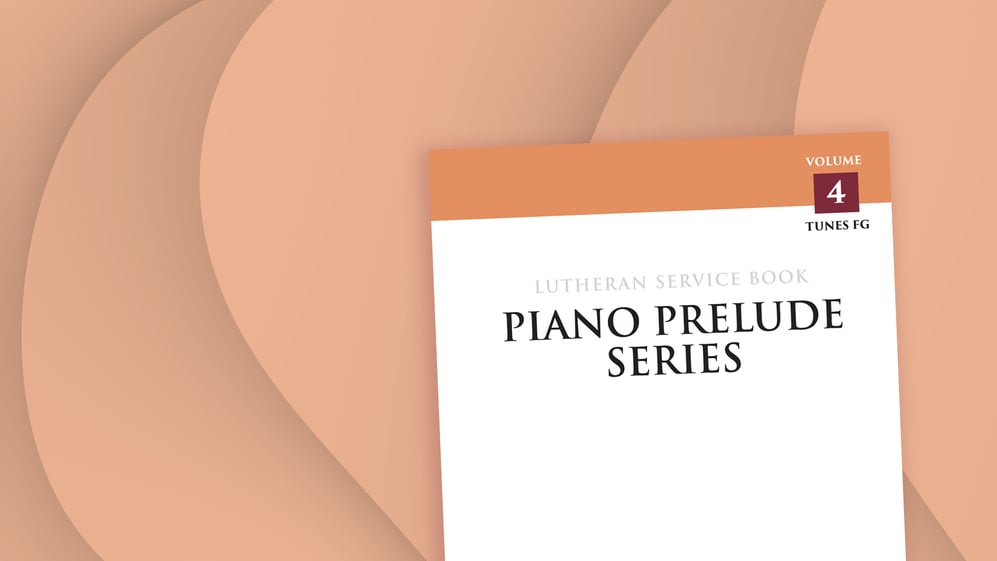 The Piano Prelude Series features newly composed pieces by dozens of composers who write in a variety of styles and harmonizations. Edited by Kevin Hildebrand, volume 4 contains preludes for tunes starting with the letters F and G. These pieces are useful as preludes, postludes, music at the offering, for introduction, and during distribution, as well as for those who play hymns at home. The durable wire binding ensures that each page lies flat against the music stand.

Resch says that the first lines of each hymn—“Hail to the Lord’s anointed, Great David’s greater Son!” and “Wake, awake, for night is flying”—helped make the connection between the two texts, and furthermore, between his composition of FREUT EUCH, IHR LIEBEN and Bach’s “Wachet auf.”

“Both seem to signal to me that something important is about to happen and that there’s a serious call for being alert and ready,” Resch says of each hymn’s opening line. “As soon as I received this assignment, I started thinking of Bach’s glorious processional movement [BWV 140].”

Since FREUT EUCH, IHR LIEBEN is written in four/four meter and BWV 140 is in three/four, Resch says the challenge in composing his setting was to fit Bach’s “Wachet auf” theme into the meter of the hymn tune. Nevertheless, the correlation between the character of both tunes made the combination of the two fitting.

The tune FILTER, written by Dr. Jeffrey Blersch to accompany Rev. Stephen Starke’s text “Water, Blood, and Spirit Crying,” is new to Lutheran hymnals in LSB. Bret A. Heim, professor and librarian at Spring Hill College in Mobile, Alabama, composed the prelude on FILTER for volume 4.

Heim says when he receives an assignment to compose on a hymn tune, he takes time to reflect on the hymn’s melody and text, as well as the text’s foundational Scripture and theology, before beginning his composition. For the tune FILTER, Heim says the word “crying” in the hymn’s opening line led him to Isaiah 40: “A voice says, ‘Cry!’ And I said, ‘What shall I cry?’ … the word of our God will stand forever.”

“What strikes me about FILTER is its gravity and profound dignity, beginning with the rhythm of the very first measure. Then, in measure three, [the rhythm] repeats … and rises to the second scale degree,” Heim says. “Everything about the tune and text taken together suggested to me the style and form of a French overture.”

Since Heim’s musical studies and experience are in classical guitar and violin as well as Baroque and early music, he says he often filters composition assignments through the eighteenth-century music he’s performed and most familiar with.

Practically speaking, Heim says the situations many churches have had to adapt to recently due to gathering restrictions has made the Piano Prelude Series quite timely and useful. He mentioned the series has been useful to his wife, who has been accompanying her church’s services as they gather outdoors.

“The fact that she has available to her well-crafted settings for piano is proof to me that the guiding philosophy behind the series is spot on,” Heim says.

In approaching the tune, Krentz Organ says she focused on the hymn’s refrain (“Joy, O joy, beyond all gladness, Christ has done away with sadness! Hence, all sorrow and repining, For the Sun of Grace is shining!”) and the forward momentum of the end of the refrain to form a ritornello figure for her composition.

“I was struck by the upward motion of the final four bars of the refrain. I played around with a ritornello figure, and settled on one that rises and then repeats,” she says. “To provide variety, in the middle of the piece, I turned the motion of that same figure downward and then mixed it up.”

Like many other composers in the Piano Prelude Series, Krentz Organ has already composed hymn preludes in the series’ first three volumes and says she enjoys approaching piano compositions because of the range of opportunities it offers to express a hymn tune.

“I enjoy composing for the piano, especially crafting pieces that use the full range of the instrument. The possibilities for expressive phrasing, dynamic contrast, and nuances of timbre each provide their own challenges and rewards,” she says. “Adding an instrument or two to the mix complicates things—in a good way—as the melody moves back and forth between forces, and the whole becomes greater than the sum of its parts.”

The fourteenth-century German Christmas hymn “We Praise You, Jesus, at Your Birth” is set to the tune GELOBET SEIST DU, which first appeared in the early sixteenth century once Martin Luther paraphrased the first stanza of the hymn. The church still uses it today. Professor, composer, musician, and author Timothy Shaw composed the prelude on GELOBET SEIST DU for volume 4.

Published in 2014, Shaw composed an original tune for the text “We Praise You, Jesus, at Your Birth” (CPH 98-4170), and, six years later, approached the hymn’s tune as it appears in LSB for the Piano Prelude Series.

Shaw says he considered the passages in the hymn’s text that highlight the humility of Christ’s incarnation when approaching the tune, such as “The gift from God’s eternal throne Here clothed in our poor flesh and bone,” and “In poverty He came to earth.”

“I opted for a quiet setting overall to reflect these images,” Shaw says. “Following a clear, straightforward presentation of the tune to help acclimate the listeners, the right hand leaps up by octaves into the piano’s high register and then descends, somewhat mystically, through a whole-tone scale. Then, each phrase of the tune is presented in three overlapping statements, each an octave lower than the previous one. This may represent musically a couple of things … the descent of Christ to earth, and the ongoing work of the Trinity as the Son took on human form.”

Although Shaw has composed hundreds of hymn-based piano preludes and arrangements for his choirs, he says he sees the Piano Prelude Series as useful for church musicians of all experience levels and tastes.

“Writing piano hymn preludes that are both accessible and musically satisfying—for the performer and listener alike—is an enormous challenge, but it’s one that forces the composer to refine one’s craft,” Shaw says. “The more I compose, the more I find myself trying to do more with less. I often ask myself, ‘How can I write something that is compelling, both musically and emotionally, using as few notes as possible?’”

To play these hymn tunes and more, purchase volume 4 of the Piano Prelude Series by clicking the button below.