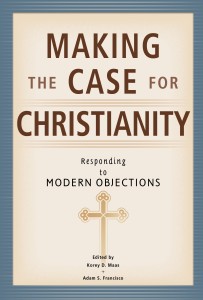 Christians are being called to defend their faith as never before—whether in the political sphere, in the work environment, and especially in personal discussions. Are you prepared “to make a defense to anyone who asks you for a reason for the hope that is in you” (1 Peter 3:15)?

Making the Case for Christianity: Responding to Modern Objections, edited by Korey D. Maas and Adam S. Francisco and available now, introduces specific intellectual objections to the Christian faith and then demonstrates how these objections might rationally be answered. Topics covered include the existence of God, the Gospels as reliable history, Islam, the resurrection of Christ, the doctrine of salvation, good vs. evil, and atheism.

Co-editor Korey Maas discusses the term “apologetics” and the need for Christians to defend the faith in the following interview.

Define “apologetics.” Why is it important for Christians to be able to defend the faith?

Etymologically, and in the sense meant when speaking about Christian apologetics, an apology is simply a “defense.” In its original Greek context, it is courtroom language, as evident most famously in Plato’s Apology of Socrates. References to Christian apologetics imply the intellectual defense of the Christian faith itself, typically made in response to accusations or objections made against it by non-Christians. Any number of reasons for its importance could be mentioned, but a few come immediately to mind. It is, for example, mandated in Scripture itself (1 Peter 3:15). From early in the church’s history it has also proved especially helpful in evangelism, demonstrating, for instance, that Christianity is neither unreasonable nor unmoored from facts. For this reason, too, the study of apologetics can also be enormously beneficial to Christians themselves, confirming that—contrary to what they’ll often hear—the faith given them by the Holy Spirit is indeed reasonable, grounded as it is in the historical fact of Christ’s incarnation, death, and resurrection.

Why did you undertake this particular project now?

The last couple of decades especially have seen a confluence of challenges to the faith. The perennial debate regarding the compatibility of science and faith, for example, has become especially heated again, fueled in part by the popularity of the “New Atheists.” The New Atheists, though, have also been pressing the case that Christianity is not just false, but that it’s immoral and dangerous. The same period has also seen the production of a number of best-sellers not only critiquing the historical trustworthiness of the New Testament but also arguing that other early, non-canonical writings about Jesus ought to be given just as much credence.  And of course the recent attention given to Islam highlights the objections to Christianity posed by other world religions. Although there are entire libraries addressing these challenges, very little has been produced by Lutherans. And since Lutherans, at least in North America over the last century, have tended to view apologetics a bit suspiciously, we hoped this might provide at least an initial and practical entrée into the field. Also somewhat novel, though, is that we’ve intentionally structured the book as a series of “case studies,” looking at specific objections raised by specific authors, rather than simply providing a more general overview of apologetic arguments.

What do you consider to be the greatest threat to Christianity?

Oddly enough, for one who’s just co-edited a volume on apologetics, I’d say it’s probably not so much any form of outright hostility toward Christianity, but that a more pressing concern is a general attitude of indifference. I’m convinced that the intellectual objections can be answered, and that if anyone is interested enough in Christianity to attempt its refutation, then at least a conversation can be had with such a person. For a number of reasons, though, at least in the modern West, many people simply don’t want to have a conversation that comes anywhere near the topic of religion; they’re content to shrug and say, “Whatever.”

Which essay resonated with you and why?

It’s difficult to single one out, but Mark Pierson’s essay does an especially fine job in addressing the kind of objections to New Testament reliability that are frequently invoked by critics of Christianity. The impact of these objections used to be relatively muted because they were voiced primarily in academic rather than popular venues. In recent decades, though, a cottage industry has grown up around making criticisms of the Gospels accessible to a mass audience. More and more, then, our laity and even youth can expect to hear these criticisms, and Pierson’s essay provides a solid starting point for being able to respond to them.

If you could suggest only one thing to Christians to help them prepare for conversations with unbelievers, what would it be?

If only one thing, then I would certainly say the best preparation is simply being confident in one’s own faith.

Which Christian apologist do you recommend most and why?

As a factual matter, it’s probably the case that I recommend C. S. Lewis most often, simply because his is a known name and because he had the great gift of being able to communicate clearly and persuasively without sacrificing substance. Among contemporary apologists, though, I especially recommend Gary Habermas for his thorough and up-to-date historical and evidential apologetic. He keeps focus on the historical evidence respecting the person and work of Christ, and so keeps the conversation right at the heart of the Gospel itself, rather than in less central concerns about the existence of a god or the problem of evil, for example. These are no doubt hugely important questions, and for some people they might be the greatest stumbling blocks. And yet, even if they can be answered satisfactorily (as I think they are, for instance, in the essays by Josh Pagán and Angus Menuge in our book), the conversation still has to move on from a god, or even a good god, to the one true God who became incarnate to suffer, die, and rise for the forgiveness of sin.

See what others are saying about Making the Case for Christianity: Responding to Modern Objections