An Excerpt from Sexual Morality in a Christless World 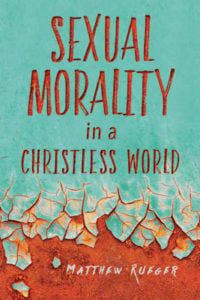 A year after the Supreme Court legalized gay marriage, we have a carefully considered response to our culture’s sexual ethics: Matthew Rueger’s Sexual Morality in a Christless World. Rueger demonstrates how Christians have been countercultural since the beginning, contrasting Christian views on sex with the Roman and Jewish cultures. An analysis of specific Bible passages that have guided Christian thought and practice demonstrates how biblical sexual morality, being both compassionate and Christ-centered, affects real people. Rueger continues by answering common secular objections and concludes with various arguments to make the case for the biblical understanding of human sexuality.

In the following excerpt, Rueger provides a marvelous explication of the much misunderstood term eunuch, giving us a Christian answer for those who have been led to question their own sexuality in light of the tremendous pressure placed upon them by society.

[The] sexual pressures upon children from the classroom to the soccer field and from friends to teachers drive children to think of themselves as sexual beings first and foremost. They are pressured to evaluate their own sexual feelings and sexual identities. Children who otherwise may not have given a second thought to sex are pushed into having sexual thoughts they are simply not mature enough to evaluate. Not surprisingly, many children find themselves badgered into utter confusion about their own sexual identity. Some children become convinced that they must identify as homosexual because they do not fit the mold of typical heterosexual behavior that someone has determined they should fit.

A passage often overlooked in the discussion of sexual identity in children is Matthew 10:12. In this passage, Jesus was being questioned about marriage and divorce, but His answer applies far beyond the strict discussion of marriage; it actually touches on the sexual identity of children. Jesus concluded His discussion with the following statement:

A eunuch was a male who had been physically castrated. Castration was not an uncommon practice in Jesus’ day. There were a number of reasons why men were castrated. In Roman culture, castration was a way of prolonging adolescence. If a Roman man was in a pederast relationship with his slave boy, for instance, he might castrate the slave in order to slow the maturation process and the onset of puberty. The end of pederast relationships was usually marked by hair growth at puberty; castration delayed that. Besides castration serving sexual goals in Roman culture, there was also the practice of castration for servants assigned to special roles within affluent households. Men who were assigned to watch over women might be castrated as a way of ensuring they could be trusted alone with women in the house.

As Jesus uses the term eunuch, He has both literal and figurative meanings in mind. He speaks of three categories of eunuchs: those born that way, those made such by the hands of men, and those who have made themselves eunuchs for the sake of the kingdom of God. It seems clear enough that the second group, those who were made eunuchs by the hands of men, should be taken literally. They were castrated physically because someone willed it. The third group, those who are eunuchs for the sake of the kingdom of God, seems less likely to be literal. Jesus most certainly is referring to men, like St. Paul, who chose a life of celibacy in order to serve God more fully and not be hindered by responsibilities to a wife or family.[1]

Paul speaks to his own celibacy in 1 Corinthians 7:7–9, “I wish that all were as I myself am. But each has his own gift from God, one of one kind and one of another. To the unmarried and the widows I say that it is good for them to remain single as I am. But if they cannot exercise self-control, they should marry. For it is better to marry than to burn with passion.” Paul sees celibacy as a special gift, not a command. It is a gift inasmuch as it allowed him to devote all his energies into serving God and the Church. Yet Paul recognized that it is not for everyone. “But if they cannot exercise self-control, they should marry.”

I have only known a handful of men in my life who were comfortable with a life of celibacy. A Greek professor in my college days was one such man. One day, we students, curious about his being single, asked him why he never married. He said that there was a time in his life when he was very serious with a young lady and was contemplating marriage. However, he realized that if he married, he would not be able to devote all his time and efforts to the study of Greek. To do justice to either his studies or wife, he had to choose one over the other; he chose Greek. He said he never regretted his decision and was very fulfilled in his life as a Classics professor. God granted him the special gift of not needing female companionship. Celibacy is not an easy life. But as Jesus noted in Matthew 19, it is an avenue that some do choose as a means of being able to serve God more fully. Luther, too, understood that those who were made eunuchs by men were literally castrated; while those who chose to be eunuchs for the kingdom’s sake were celibate.

The first and second classes are those who either were born that way or were castrated by the hands of men. They are called “castrates” by the world and the jurists, too. But the third class are those who have castrated themselves for the sake of the kingdom of heaven. They are another kind of castrate; they are called eunuchs not outwardly, in their body, but spiritually, in their heart, not in a worldly sense, but as He says, “for the sake of the kingdom of heaven.”[2]

Especially interesting for this discussion of sexual identity is Jesus’ first category, those who were born that way. It is certainly possible, as Luther understood it, that Jesus is talking about a physical issue. To suffer from such a condition from birth means there would be some physical defect where boys were literally deprived of the normal function of male sexual organs. Such a defect, through no fault of their own, would cause serious developmental problems and would affect their desires for the opposite sex. But it is also possible that this first category could include those who, from birth, simply do not have an active desire to be with the opposite sex. Jesus has demonstrated that the term eunuch can be applied in a figurative sense to those who choose celibacy to serve God. Why can it not also include those who are born with a penchant for celibacy because they do not feel the need to chase the opposite gender?

There are people who just are not that interested in dating or marriage. There is no reason why this text could not include them. They are eunuchs in a figurative way, born without a strong impulse for marriage or family. That does not mean they are homosexual! Jesus does not condemn those who are not interested sexually in the opposite sex, and He does not classify such “eunuchs” as “homosexual.” A eunuch represents someone who is either in control over his sexual urges through the force of his sanctified will or someone who simply lacks a strong sex drive. It is not a term for someone whose sexual desire is for those of his own gender. There is no biblical text that would support the view that people are born homosexual. That being said, those who do not feel a particular attraction for the other sex can be directed to this passage for assurance that there is nothing sinful in lacking an “alpha male” sex drive. Jesus recognizes the state of being a eunuch and does not condemn them for being born without a strong desire for the opposite sex.

In a world driving children to stake out their sexual identity, it can be of great comfort to assure children that they do not have to adopt a sexual worldview. It is okay if they have feelings for the opposite sex and okay if those feelings do not seem as pronounced as other children. They are not defined by the feelings they have in the moment. They are redeemed children of the Savior who will shape and mold them over time into a God-pleasing image. If they have thoughts or feelings that are contrary to God’s will, God can forgive that and redirect them to more God-pleasing thoughts.

[1] Cf. Jeffrey Gibbs, Concordia Commentary: Matthew (St. Louis: Concordia, 2010), 954–955. Gibbs’s discussion supports the figurative reading of eunuch with reference to the third group. He does not, however, consider how a figurative reading at this place may impact the causal understanding of the first group.

From Sexual Morality in a Christless World, pages 106–9 © 2016 by Matthew Rueger. Published by Concordia Publishing House. All rights reserved.

To order Sexual Morality in a Christless World, please contact CPH at 800-325-3040 or visit www.cph.org.