An excerpt from From Abraham to Paul 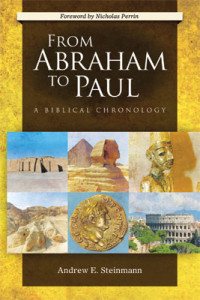 History matters, and God has acted within history to bring about His salvation plan. In From Abraham to Paul: A Biblical Chronology, author Andrew Steinmann presents an accessible timeline of biblical events with the result that while there is much we do not know, there is also much we can know from Scripture with confidence.

The following excerpt is offered in anticipation of the Church's commemoration of the patriarch Abraham on October 9.


From these dates the rest of the dated events in Genesis for the lives of Israel’s patriarchs can be determined.

While the basic dates for Abraham, Isaac and Jacob seem assured, some scholars have challenged whether the 430 years for Israel’s time in Egypt is correct.[2] The basis for this challenge is the LXX, where Exod 12:40 reads

The sojourning of the sons of Israel which they sojourned in Egypt and in the land of Canaan was 430 years.

Advocates of this view support their assertion by noting that Abraham was told that his descendants would return from Egypt “in the fourth generation” (Gen 15:16). It is claimed that 215 years is a more reasonable time for four generations than is 430 years.

There are multiple problems with this theory, however. First of all, it should be noted that elsewhere in Scripture, Israel’s time in Egypt is reckoned to be about 400 years in round numbers. Thus, God told Abraham that for 400 years his descendants would be strangers in a land that was not theirs (Gen 15:13). This passage is quoted by Stephen in Acts 7:6.

Second, Israel grew from some seventy persons when Jacob entered Egypt (Exod 1:5) to over 600,000 men twenty years old or older at the Exodus (Num 1:46). This would hardly be possible in four generations over 215 years, but is entirely possible in 430 years.

Third, Paul’s reference to 430 years in Gal 3:17 is not from the time Abraham entered Canaan to the time of the Exodus, but is clearly 430 years from the time that the covenant “previously had been ratified” (προκεκυρωμένην). Paul most likely had in mind the covenant to Abraham that contained the promise about Abraham’s descendants’ sojourn in Egypt as given by God in Gen 15. Note that Gen 15 previously mentioned a foreign sojourn as slaves for 400 years (Gen 15:13). Therefore, Paul probably considered Jacob’s entry into Egypt as the ratification of the covenant. This would also make sense with Paul’s statement in Acts 13:17–20 that Israel’s time in Egypt, in the wilderness, and the time when Joshua apportioned the land among Israel’s tribes was “about 450 years” (ὡς ἔτεσιν τετρακοσίοις καὶ πεντήκοντα).[3] The actual time was 477 years, which is reasonably approximated as “about 450 years.” [4] Thus, Paul in Acts 13:20 and Gal 3:17 considered Israel’s time in Egypt to be 430 years.

Fourth, the “fourth generation” of Gen 15:16 should be understood in context. The word דֹר, “generation,” can reference a person’s entire lifetime.[5] Since Abraham, Isaac and Jacob all lived well over 100 years, “in the fourth generation” may well be intended to indicate somewhat less than four complete lifetimes in terms understandable to Abraham.

Finally, Larsson notes that a comparison of Pentateuchal chronologies between MT and LXX reveals that LXX translators tended to alter the Hebrew text’s chronology where the text is difficult to understand or was viewed as self-contradictory.[6] This appears to be the case at Exod 12:40, since LXX adds “and in the land of Canaan” after “in Egypt” when chronologically the Patriarchs’ sojourn in Canaan came before Jacob’s entry into Egypt. Moreover, both MT and LXX have “400 years” at Gen 15:13, making LXX Exod 12:40 likely a LXX alteration that thereby unwittingly created a conflict between LXX Exod 12:40 and LXX Gen 15:13.

Therefore, there is little to support the theory that Israel was in Egypt 215 years. Instead, the MT’s 430 years should be accepted as accurate.

Sarah was ten years younger than Abraham. This can be established from comparing Gen 17:17 with Gen 17:1, where we are told that God appeared to Abraham when he was 99. At that time God revealed to Abraham that Sarah would bear Isaac at the same time the next year (Gen 17:21). Since Sarah would be 90 when she bore Isaac (Gen 17:17), she would have been 89 when God’s conversation with Abraham took place. Thus, Sarah was ten years younger than Abraham, and she was born in 2156 BC. Since Sarah lived 127 years, she died in 2029 BC. (Gen 23:1)

Therefore, the chronology of the events of Abraham’s life is:

[1] If Jacob was almost 131 years old, he could have been born in 2007. For the sake of simplicity, however, all birth and death dates will be listed by as single year instead of using some other notation such as 2007/2006.

[2] See the discussion in Finegan, Handbook of Biblical Chronology, 203–207 and Hoehner, “The Duration of the Egyptian Bondage.”

[3] At Acts 13:20 some manuscripts, especially those of the Byzantine Koine tradition, transpose the phrases “and after this” (καὶ μετὰ ταῦτα) and “430 years” with the result that the 430 years terminate with Samuel instead of the beginning of the period of the judges. This reading is reflected in the King James Version at Acts 13:20. However, this is clearly a secondary reading. The better reading, which places the 430 years before the judges, is also the reading of the Vulgate. It is impossible to place all of the events from Jacob’s entry into Egypt to the time of Samuel into a 430 year period unless one almost completely discounts the chronological information in Judges as mistaken or fictional.

[4] 430 years in Egypt, 40 years in the wilderness and 7 years before the land was distributed. If Paul was using the 400 years of Gen 15:13, then the period is 400 + 40 + 7 = 447, even more reasonably an approximation of 450 years. The seven year period can be reckoned by noting that in Josh 14:6–12 Caleb requested his land 45 years after having been sent by Moses to spy out the land in 1444 BC, two years after the exodus from Egypt. Thus, there were 47 years from the exodus to the distribution of the land among the tribes of Israel.

From From Abraham to Paul: A Biblical Chronology, pages 67–72 © 2011 Andrew E. Steinmann, published by Concordia Publishing House. All rights reserved.