A Devotion from Treasury of Daily Prayer 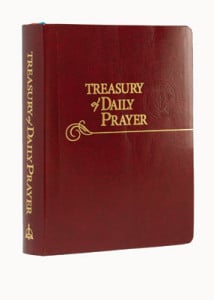 Organized around the Christian Church Year, Treasury of Daily Prayer is designed to be an all-in-one resource that cultivates an enriching devotional life for individuals,
families, and small groups. The following excerpt, for the commemoration of Ezekiel (July 21), is indicative of the way in which Treasury of Daily Prayer unites Scripture readings, prayers, psalms, hymns, and devotional readings from the church fathers to guide daily prayer and meditation on God’s Word.

1 Praise the Lord! Oh give thanks to the Lord, for | he is good,* for his steadfast love endures for- | ever!
2 Who can utter the mighty deeds | of the Lord,* or declare | all his praise?
3 Blessèd are they who observe | justice,* who do righteousness | at all times!
4 Remember me, O Lord, when you show favor to your | people;* help me when you | save them,
5 that I may look upon the prosperity of your chosen ones, that I may rejoice in the gladness of your | nation,* that I may glory with your in- | heritance.
—Psalm 106:1–5

The Philistines Capture the Ark

1 And the word of Samuel came to all Israel.

5 As soon as the ark of the covenant of the Lord came into the camp, all Israel gave a mighty shout, so that the earth resounded. 6 And when the Philistines heard the noise of the shouting, they said, “What does this great shouting in the camp of the Hebrews mean?” And when they learned that the ark of the Lord had come to the camp, 7 the Philistines were afraid, for they said, “A god has come into the camp.” And they said, “Woe to us! For nothing like this has happened before. 8 Woe to us! Who can deliver us from the power of these mighty gods? These are the gods who struck the Egyptians with every sort of plague in the wilderness. 9 Take courage, and be men, O Philistines, lest you become slaves to the Hebrews as they have been to you; be men and fight.”

10 So the Philistines fought, and Israel was defeated, and they fled, every man to his home. And there was a very great slaughter, for there fell of Israel thirty thousand foot soldiers. 11 And the ark of God was captured, and the two sons of Eli, Hophni and Phinehas, died.

The Death of Eli

12 A man of Benjamin ran from the battle line and came to Shiloh the same day, with his clothes torn and with dirt on his head. 13 When he arrived, Eli was sitting on his seat by the road watching, for his heart trembled for the ark of God. And when the man came into the city and told the news, all the city cried out. 14 When Eli heard the sound of the outcry, he said, “What is this uproar?” Then the man hurried and came and told Eli. 15 Now Eli was ninety-eight years old and his eyes were set so that he could not see. 16 And the man said to Eli, “I am he who has come from the battle; I fled from the battle today.” And he said, “How did it go, my son?” 17 He who brought the news answered and said, “Israel has fled before the Philistines, and there has also been a great defeat among the people. Your two sons also, Hophni and Phinehas, are dead, and the ark of God has been captured.” 18 As soon as he mentioned the ark of God, Eli fell over backward from his seat by the side of the gate, and his neck was broken and he died, for the man was old and heavy. He had judged Israel forty years.

19 Now his daughter-in-law, the wife of Phinehas, was pregnant, about to give birth. And when she heard the news that the ark of God was captured, and that her father-in-law and her husband were dead, she bowed and gave birth, for her pains came upon her. 20 And about the time of her death the women attending her said to her, “Do not be afraid, for you have borne a son.” But she did not answer or pay attention. 21 And she named the child Ichabod, saying, “The glory has departed from Israel!” because the ark of God had been captured and because of her father-in-law and her husband. 22 And she said, “The glory has departed from Israel, for the ark of God has been captured.”

[Paul and Silas in Prison]

23 And when they had inflicted many blows upon them, they threw them into prison, ordering the jailer to keep them safely. 24 Having received this order, he put them into the inner prison and fastened their feet in the stocks.

25 About midnight Paul and Silas were praying and singing hymns to God, and the prisoners were listening to them, 26 and suddenly there was a great earthquake, so that the foundations of the prison were shaken. And immediately all the doors were opened, and everyone’s bonds were unfastened. 27 When the jailer woke and saw that the prison doors were open, he drew his sword and was about to kill himself, supposing that the prisoners had escaped. 28 But Paul cried with a loud voice, “Do not harm yourself, for we are all here.” 29 And the jailer called for lights and rushed in, and trembling with fear he fell down before Paul and Silas. 30 Then he brought them out and said, “Sirs, what must I do to be saved?” 31 And they said, “Believe in the Lord Jesus, and you will be saved, you and your household.” 32 And they spoke the word of the Lord to him and to all who were in his house. 33 And he took them the same hour of the night and washed their wounds; and he was baptized at once, he and all his family. 34 Then he brought them up into his house and set food before them. And he rejoiced along with his entire household that he had believed in God.

35 But when it was day, the magistrates sent the police, saying, “Let those men go.” 36 And the jailer reported these words to Paul, saying, “The magistrates have sent to let you go. Therefore come out now and go in peace.” 37 But Paul said to them, “They have beaten us publicly, uncondemned, men who are Roman citizens, and have thrown us into prison; and do they now throw us out secretly? No! Let them come themselves and take us out.” 38 The police reported these words to the magistrates, and they were afraid when they heard that they were Roman citizens. 39 So they came and apologized to them. And they took them out and asked them to leave the city. 40 So they went out of the prison and visited Lydia. And when they had seen the brothers, they encouraged them and departed.

Ezekiel, the son of Buzi, from the line of Aaron, was a priest and prophet. In the year of the world 3350, in the sixth year before the fall of Jerusalem, he was divinely inspired in Babylon to console and strengthen the Jews, who five years previously, at the urging of Jeremiah and of their own free will, had given themselves with King Jehoiakim or Jeconiah to King Nebuchadnezzar and had migrated to Babylon. These people, seeing that the destruction of Jerusalem was delayed for five full years, were thinking that the predictions of Jeremiah were in vain, and they were regretting that they had voluntarily left their fatherland. Therefore Ezekiel predicted that Jerusalem would surely be overturned, even if the punishment were delayed for a while. At the same time, he also promised the liberation and return from Babylon (ch. 11). In the year of the world 3358, the third year of Jeconiah’s migration, Ezekiel was called to his ministry by a unique rite and divine testimony (chs. 1–3). The vision of the four wheels and living creatures (chs. 1 and 10) signifies the chariot of Christ, in which, through the ministry of the Gospel, with the breath of the Holy Spirit and the fiery tongues of the apostles, He is conveyed into all the world. . . . In the year of the world 3378, the twenty-fifth year of Jeconiah’s migration, Ezekiel described the building of the spiritual Jerusalem, or of the ministry of the Church of Christ, from the fortieth chapter until the end.

“Though he will shed My precious blood,
Me of My life bereaving,
All this I suffer for your good;
Be steadfast and believing.
Life will from death the vict’ry win;
My innocence shall bear your sin,
And you are blest forever.”
—Dear Christians, One and All, Rejoice (LSB 556:8)

Prayer of the Day

Lord God, heavenly Father, through the prophet Ezekiel, You continued the prophetic pattern of teaching Your people the true faith and demonstrating through miracles Your presence in creation to heal it of its brokenness. Grant that Your Church may see in Your Son, our Lord Jesus Christ, the final end-times prophet whose teaching and miracles continue in Your Church through the healing medicine of the Gospel and the Sacraments; through Jesus Christ, our Lord. (1062)

Ezekiel, the son of Buzi, was a priest called by God to be a prophet to the exiles during the Babylonian captivity (Ezekiel 1:3). In 597 BC, King Nebuchadnezzar and the Babylonian army brought the king of Judah and thousands of the best citizens of Jerusalem—including Ezekiel—to Babylon (2 Kings 24:8–16). Ezekiel’s priestly back-ground profoundly stamped his prophecy, as the holiness of God and the temple figure prominently in his messages (for example, Ezekiel 9–10 and 40–48). From 593 BC to the destruction of Jerusalem and the temple in 586 BC, Ezekiel prophesied the inevitability of divine judgment on Jerusalem, on the exiles in Babylon, and on seven nations that surrounded Israel (Ezekiel 1–32). Jerusalem would fall, and the exiles would not quickly return, as a just consequence of their sin. Once word reached Ezekiel that Jerusalem and the temple were destroyed, his message became one of comfort and hope. Through him, God promised that His people would experience future restoration, renewal, and revival in the coming messianic kingdom (Ezekiel 33–48). Much of the strange symbolism of Ezekiel’s prophecies was later employed in the Revelation to St. John.