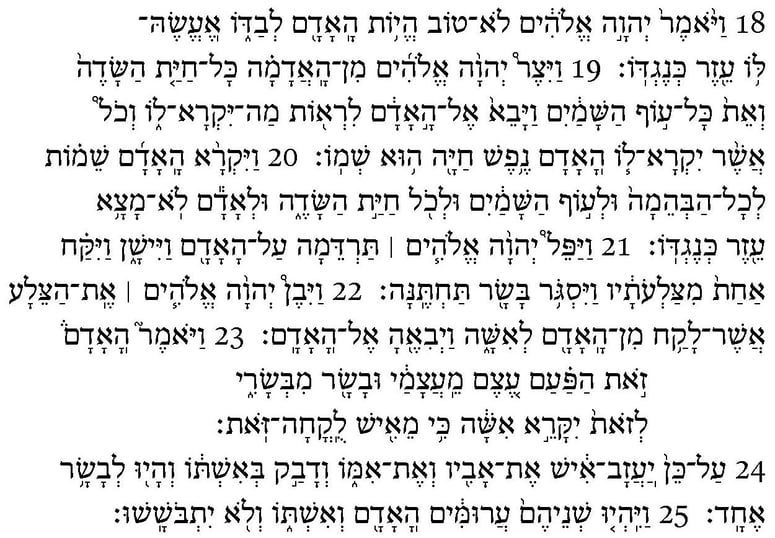 Then the Lord God said, “It is not good that the man should be alone; I will make him a helper fit for him.” Now out of the ground the Lord God had formed every beast of the field and every bird of the heavens and brought them to the man to see what he would call them. And whatever the man called every living creature, that was its name. The man gave names to all livestock and to the birds of the heavens and to every beast of the field. But for Adam there was not found a helper fit for him. So the Lord God caused a deep sleep to fall upon the man, and while he slept took one of his ribs and closed up its place with flesh. And the rib that the Lord God had taken from the man he made into a woman and brought her to the man. Then the man said,

“This at last is bone of my bones

and flesh of my flesh;

she shall be called Woman,

because she was taken out of Man.”

Therefore a man shall leave his father and his mother and hold fast to his wife, and they shall become one flesh. And the man and his wife were both naked and were not ashamed.

Therefore we must pay much closer attention to what we have heard, lest we drift away from it. For since the message declared by angels proved to be reliable, and every transgression or disobedience received a just retribution, how shall we escape if we neglect such a great salvation? It was declared at first by the Lord, and it was attested to us by those who heard, while God also bore witness by signs and wonders and various miracles and by gifts of the Holy Spirit distributed according to his will.

For it was not to angels that God subjected the world to come, of which we are speaking. It has been testified somewhere,

“What is man, that you are mindful of him,

or the son of man, that you care for him?

You made him for a little while lower than the angels;

you have crowned him with glory and honor,

putting everything in subjection under his feet.”

For it was fitting that he, for whom and by whom all things exist, in bringing many sons to glory, should make the founder of their salvation perfect through suffering. For he who sanctifies and those who are sanctified all have one source. That is why he is not ashamed to call them brothers, saying,

“I will tell of your name to my brothers;

in the midst of the congregation I will sing your praise.”

“Behold, I and the children God has given me.”

And Pharisees came up and in order to test him asked, “Is it lawful for a man to divorce his wife?” He answered them, “What did Moses command you?” They said, “Moses allowed a man to write a certificate of divorce and to send her away.” And Jesus said to them, “Because of your hardness of heart he wrote you this commandment. But from the beginning of creation, ‘God made them male and female.’ ‘Therefore a man shall leave his father and mother and hold fast to his wife, and the two shall become one flesh.’ So they are no longer two but one flesh. What therefore God has joined together, let not man separate.”

And they were bringing children to him that he might touch them, and the disciples rebuked them. But when Jesus saw it, he was indignant and said to them, “Let the children come to me; do not hinder them, for to such belongs the kingdom of God. Truly, I say to you, whoever does not receive the kingdom of God like a child shall not enter it.” And he took them in his arms and blessed them, laying his hands on them.

The following is from Hebrews, by John W. Kleinig, Concordia Commentary series, copyright © 2017 by Concordia Publishing House. All rights reserved.

“The message of salvation is valid and certain for three reasons. First, it has its ‘foundation,’ its beginning and basis and content, in the ‘Lord’ Jesus as God’s spokesman (2:3). Through him God speaks his Word of salvation to his people on earth. God proclaims that message of ‘salvation’ to the congregation through Jesus as their exalted ‘Lord.’ It is, in fact, inseparable from him. Since ‘salvation’ has its ‘foundation’ (ἀρχή) in him (2:3), he is ‘the founder [ἀρχηγός] of salvation’ (2:10). Thus God did not just begin to speak salvation in the earthly ministry of Jesus; he continues to speak it now through the heavenly ministry of the risen Lord Jesus. He is both the messenger and the message. He calls the nations to ‘pay attention’ (Heb 2:1) to him and his message in fulfillment of the prophecies in Is 32:4 and Is 49:1 to attend to the Messiah as the preacher of God’s salvation to all people (Is 42:6; 49:6). The great salvation provided by God’s great High Priest (4:14) is therefore the main theme of the sermon, with the description of its origin in 2:5–18 and the explanation of its content in 5:1–10 and 7:1–10:18” (p. 104).