The Nativity of St. John the Baptist 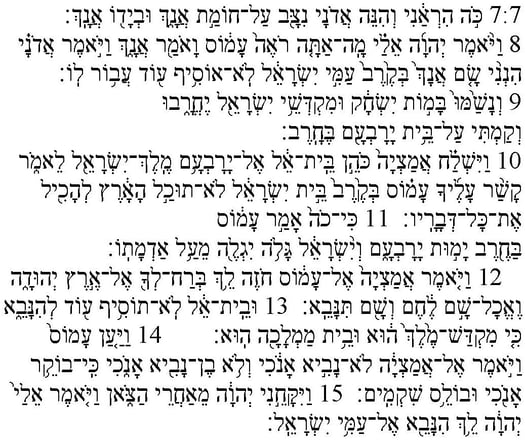 and cry to her

that her warfare is ended,

that her iniquity is pardoned,

that she has received from the Lord’s hand

double for all her sins.

“In the wilderness prepare the way of the Lord;

make straight in the desert a highway for our God.

Every valley shall be lifted up,

and every mountain and hill be made low;

the uneven ground shall become level,

and the rough places a plain.

And the glory of the Lord shall be revealed,

and all flesh shall see it together,

for the mouth of the Lord has spoken.”

Now Paul and his companions set sail from Paphos and came to Perga in Pamphylia. And John left them and returned to Jerusalem, but they went on from Perga and came to Antioch in Pisidia. And on the Sabbath day they went into the synagogue and sat down. After the reading from the Law and the Prophets, the rulers of the synagogue sent a message to them, saying, “Brothers, if you have any word of encouragement for the people, say it.” So Paul stood up, and motioning with his hand said:

“Men of Israel and you who fear God, listen. The God of this people Israel chose our fathers and made the people great during their stay in the land of Egypt, and with uplifted arm he led them out of it. And for about forty years he put up with them in the wilderness. And after destroying seven nations in the land of Canaan, he gave them their land as an inheritance. All this took about 450 years. And after that he gave them judges until Samuel the prophet. Then they asked for a king, and God gave them Saul the son of Kish, a man of the tribe of Benjamin, for forty years. And when he had removed him, he raised up David to be their king, of whom he testified and said, ‘I have found in David the son of Jesse a man after my heart, who will do all my will.’ Of this man’s offspring God has brought to Israel a Savior, Jesus, as he promised. Before his coming, John had proclaimed a baptism of repentance to all the people of Israel. And as John was finishing his course, he said, ‘What do you suppose that I am? I am not he. No, but behold, after me one is coming, the sandals of whose feet I am not worthy to untie.’

“Brothers, sons of the family of Abraham, and those among you who fear God, to us has been sent the message of this salvation.”

Now the time came for Elizabeth to give birth, and she bore a son. And her neighbors and relatives heard that the Lord had shown great mercy to her, and they rejoiced with her. And on the eighth day they came to circumcise the child. And they would have called him Zechariah after his father, but his mother answered, “No; he shall be called John.” And they said to her, “None of your relatives is called by this name.” And they made signs to his father, inquiring what he wanted him to be called. And he asked for a writing tablet and wrote, “His name is John.” And they all wondered. And immediately his mouth was opened and his tongue loosed, and he spoke, blessing God. And fear came on all their neighbors. And all these things were talked about through all the hill country of Judea, and all who heard them laid them up in their hearts, saying, “What then will this child be?” For the hand of the Lord was with him.

And his father Zechariah was filled with the Holy Spirit and prophesied, saying,

“Blessed be the Lord God of Israel,

for he has visited and redeemed his people

and has raised up a horn of salvation for us

in the house of his servant David,

as he spoke by the mouth of his holy prophets from of old,

that we should be saved from our enemies

and from the hand of all who hate us;

to show the mercy promised to our fathers

and to remember his holy covenant,

the oath that he swore to our father Abraham, to grant us

that we, being delivered from the hand of our enemies,

in holiness and righteousness before him all our days.

And you, child, will be called the prophet of the Most High;

for you will go before the Lord to prepare his ways,

to give knowledge of salvation to his people

in the forgiveness of their sins,

because of the tender mercy of our God,

whereby the sunrise shall visit us from on high

to give light to those who sit in darkness and in the shadow of death,

to guide our feet into the way of peace.”

And the child grew and became strong in spirit, and he was in the wilderness until the day of his public appearance to Israel.

The following is from Commentary on Acts, by Robert H. Smith, Concordia Classic Commentary series, copyright © 1970 by Concordia Publishing House. All rights reserved.