And he said to me, “Son of man, stand on your feet, and I will speak with you.” And as he spoke to me, the Spirit entered into me and set me on my feet, and I heard him speaking to me. And he said to me, “Son of man, I send you to the people of Israel, to nations of rebels, who have rebelled against me. They and their fathers have transgressed against me to this very day. The descendants also are impudent and stubborn: I send you to them, and you shall say to them, ‘Thus says the Lord God.’ And whether they hear or refuse to hear (for they are a rebellious house) they will know that a prophet has been among them.”

I must go on boasting. Though there is nothing to be gained by it, I will go on to visions and revelations of the Lord. I know a man in Christ who fourteen years ago was caught up to the third heaven—whether in the body or out of the body I do not know, God knows. And I know that this man was caught up into paradise—whether in the body or out of the body I do not know, God knows—and he heard things that cannot be told, which man may not utter. On behalf of this man I will boast, but on my own behalf I will not boast, except of my weaknesses—though if I should wish to boast, I would not be a fool, for I would be speaking the truth; but I refrain from it, so that no one may think more of me than he sees in me or hears from me. So to keep me from becoming conceited because of the surpassing greatness of the revelations, a thorn was given me in the flesh, a messenger of Satan to harass me, to keep me from becoming conceited. Three times I pleaded with the Lord about this, that it should leave me. But he said to me, “My grace is sufficient for you, for my power is made perfect in weakness.” Therefore I will boast all the more gladly of my weaknesses, so that the power of Christ may rest upon me. For the sake of Christ, then, I am content with weaknesses, insults, hardships, persecutions, and calamities. For when I am weak, then I am strong.

He went away from there and came to his hometown, and his disciples followed him. And on the Sabbath he began to teach in the synagogue, and many who heard him were astonished, saying, “Where did this man get these things? What is the wisdom given to him? How are such mighty works done by his hands? Is not this the carpenter, the son of Mary and brother of James and Joses and Judas and Simon? And are not his sisters here with us?” And they took offense at him. And Jesus said to them, “A prophet is not without honor, except in his hometown and among his relatives and in his own household.” And he could do no mighty work there, except that he laid his hands on a few sick people and healed them. And he marveled because of their unbelief.

And he went about among the villages teaching.

And he called the twelve and began to send them out two by two, and gave them authority over the unclean spirits. He charged them to take nothing for their journey except a staff—no bread, no bag, no money in their belts—but to wear sandals and not put on two tunics. And he said to them, “Whenever you enter a house, stay there until you depart from there. And if any place will not receive you and they will not listen to you, when you leave, shake off the dust that is on your feet as a testimony against them.” So they went out and proclaimed that people should repent. And they cast out many demons and anointed with oil many who were sick and healed them. 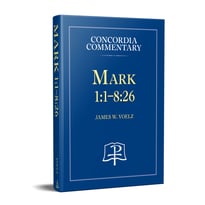 The following is from Mark 1:1–8:26, by James W. Voelz, Concordia Commentary series, copyright © 2013 by Concordia Publishing House. All rights reserved.

“ἐκτινάξατε τὸν χοῦν, ‘shake off the dust’: To shake dust off is a great insult; it indicates that the person is unwilling to be touched by what others touch. Indeed, Jews returning to Israel after travel abroad regularly shook the dust off their feet. Note the parallel to Acts 13:51, where Paul shakes the dust of Pisidian Antioch from his feet and moves to Iconium. Such dust-shaking seems not to be related to cursing another party (contra Adela Yarbro Collins, Mark: A Commentary, Hermeneia [Minneapolis: Fortress, 2007], 302) but serves as a warning: ‘You have rejected our preaching. Therefore, you and all that’s yours are without the reign and rule of God, and we will not be associated with that.’ Note that this is another example of the Lord going the extra mile, as it were. All expressions of judgment are never simply condemnations carried out immediately but linguistic statements that have the illocutionary force of warning to elicit repentance” (p. 394).