The First Sunday after Christmas 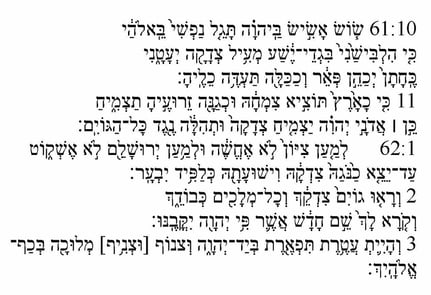 I will greatly rejoice in the Lord;
my soul shall exult in my God,
for he has clothed me with the garments of salvation;
he has covered me with the robe of righteousness,
as a bridegroom decks himself like a priest with a beautiful headdress,
and as a bride adorns herself with her jewels.
For as the earth brings forth its sprouts,
and as a garden causes what is sown in it to sprout up,
so the Lord God will cause righteousness and praise
to sprout up before all the nations.

For Zion’s sake I will not keep silent,
and for Jerusalem’s sake I will not be quiet,
until her righteousness goes forth as brightness,
and her salvation as a burning torch.
The nations shall see your righteousness,
and all the kings your glory,
and you shall be called by a new name
that the mouth of the Lord will give.
You shall be a crown of beauty in the hand of the Lord,
and a royal diadem in the hand of your God.

But when the fullness of time had come, God sent forth his Son, born of woman, born under the law, to redeem those who were under the law, so that we might receive adoption as sons. And because you are sons, God has sent the Spirit of his Son into our hearts, crying, “Abba! Father!” So you are no longer a slave, but a son, and if a son, then an heir through God.

And when the time came for their purification according to the Law of Moses, they brought him up to Jerusalem to present him to the Lord (as it is written in the Law of the Lord, “Every male who first opens the womb shall be called holy to the Lord”) and to offer a sacrifice according to what is said in the Law of the Lord, “a pair of turtledoves, or two young pigeons.” Now there was a man in Jerusalem, whose name was Simeon, and this man was righteous and devout, waiting for the consolation of Israel, and the Holy Spirit was upon him. And it had been revealed to him by the Holy Spirit that he would not see death before he had seen the Lord’s Christ. And he came in the Spirit into the temple, and when the parents brought in the child Jesus, to do for him according to the custom of the Law, he took him up in his arms and blessed God and said,

“Lord, now you are letting your servant depart in peace,
according to your word;
for my eyes have seen your salvation
that you have prepared in the presence of all peoples,
a light for revelation to the Gentiles,
and for glory to your people Israel.”

And his father and his mother marveled at what was said about him. And Simeon blessed them and said to Mary his mother, “Behold, this child is appointed for the fall and rising of many in Israel, and for a sign that is opposed (and a sword will pierce through your own soul also), so that thoughts from many hearts may be revealed.”

And there was a prophetess, Anna, the daughter of Phanuel, of the tribe of Asher. She was advanced in years, having lived with her husband seven years from when she was a virgin, and then as a widow until she was eighty-four. She did not depart from the temple, worshiping with fasting and prayer night and day. And coming up at that very hour she began to give thanks to God and to speak of him to all who were waiting for the redemption of Jerusalem.

And when they had performed everything according to the Law of the Lord, they returned into Galilee, to their own town of Nazareth. And the child grew and became strong, filled with wisdom. And the favor of God was upon him. 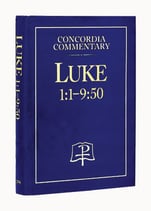 The following is from Luke 1:1–9:50, Concordia Commentary series, by Arthur A. Just Jr.

“Simeon’s eyes are opened to this salvation even though it is cloaked in the forty-day-old Jesus, still wrapped in infant’s clothing. Luke weaves throughout the gospel the metaphor of closed and opened eyes for the motif of minds closed or opened to the kerygma of a crucified and resurrected Jesus. This Lukan motif of closed and opened eyes refers not to physical vision but to an eschatological understanding of the work of Jesus. It comes to a climax in 24:16, where God closes the eyes of the Emmaus disciples and then opens them in 24:31 to reveal for the first time to anyone in Luke’s gospel the crucified and risen Christ. Throughout Luke’s gospel, ‘the eyes’ used metaphorically describe the understanding or misunderstanding of God’s revelation in Jesus. The theme is first used here as Simeon takes the infant Jesus in his arms, blesses God by saying that he may now depart in peace ‘because my eyes have seen your salvation.’ Luke connects the eyes here to the understanding of Simeon that the infant Jesus embodies God’s salvation.” (pp. 120–21)

Developing a Circle of Trust

When students' year is not going as they planned, whether a start or an end of a journey, there are practical and biblical ways to care for...

Gerhard wrote extensively on the resurrection of the dead in his Theological Commonplaces. Read an excerpt about the effects on...

Gerhard wrote extensively on the resurrection of the dead in his Theological Commonplaces. Read an excerpt about the effects on...

An Interview with Rev. Dr. David Coe on Provoking Proverbs

The Book of Proverbs is the book of ethics in the Old Testament. See how author David Coe relates the Proverbs to the Ten Commandments.

Read about the Verba testamenti and Lord's Supper with Albrecht Peters using his interpretations of Luther's Catechism.