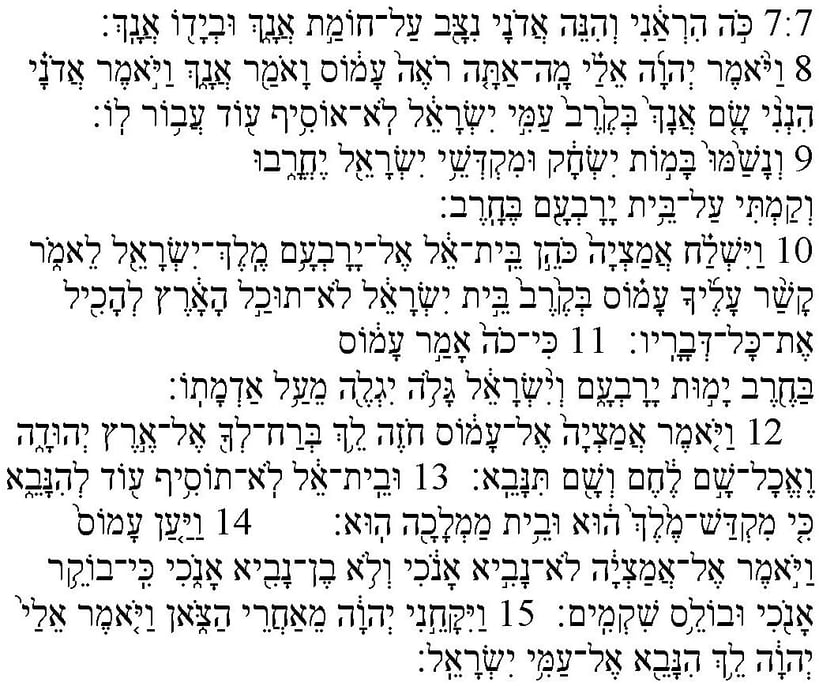 “Behold, I am setting a plumb line

in the midst of my people Israel;

I will never again pass by them;

the high places of Isaac shall be made desolate,

and the sanctuaries of Israel shall be laid waste,

and I will rise against the house of Jeroboam with the sword.”

Then Amaziah the priest of Bethel sent to Jeroboam king of Israel, saying, “Amos has conspired against you in the midst of the house of Israel. The land is not able to bear all his words. For thus Amos has said,

“ ‘Jeroboam shall die by the sword,

and Israel must go into exile

And Amaziah said to Amos, “O seer, go, flee away to the land of Judah, and eat bread there, and prophesy there, but never again prophesy at Bethel, for it is the king’s sanctuary, and it is a temple of the kingdom.”

Then Amos answered and said to Amaziah, “I was no prophet, nor a prophet’s son, but I was a herdsman and a dresser of sycamore figs. But the Lord took me from following the flock, and the Lord said to me, ‘Go, prophesy to my people Israel.’ ”

Blessed be the God and Father of our Lord Jesus Christ, who has blessed us in Christ with every spiritual blessing in the heavenly places, even as he chose us in him before the foundation of the world, that we should be holy and blameless before him. In love he predestined us for adoption to himself as sons through Jesus Christ, according to the purpose of his will, to the praise of his glorious grace, with which he has blessed us in the Beloved. In him we have redemption through his blood, the forgiveness of our trespasses, according to the riches of his grace, which he lavished upon us, in all wisdom and insight making known to us the mystery of his will, according to his purpose, which he set forth in Christ as a plan for the fullness of time, to unite all things in him, things in heaven and things on earth.

In him we have obtained an inheritance, having been predestined according to the purpose of him who works all things according to the counsel of his will, so that we who were the first to hope in Christ might be to the praise of his glory. In him you also, when you heard the word of truth, the gospel of your salvation, and believed in him, were sealed with the promised Holy Spirit, who is the guarantee of our inheritance until we acquire possession of it, to the praise of his glory.

King Herod heard of it, for Jesus’ name had become known. Some said, “John the Baptist has been raised from the dead. That is why these miraculous powers are at work in him.” But others said, “He is Elijah.” And others said, “He is a prophet, like one of the prophets of old.” But when Herod heard of it, he said, “John, whom I beheaded, has been raised.” For it was Herod who had sent and seized John and bound him in prison for the sake of Herodias, his brother Philip’s wife, because he had married her. For John had been saying to Herod, “It is not lawful for you to have your brother’s wife.” And Herodias had a grudge against him and wanted to put him to death. But she could not, for Herod feared John, knowing that he was a righteous and holy man, and he kept him safe. When he heard him, he was greatly perplexed, and yet he heard him gladly.

But an opportunity came when Herod on his birthday gave a banquet for his nobles and military commanders and the leading men of Galilee. For when Herodias’s daughter came in and danced, she pleased Herod and his guests. And the king said to the girl, “Ask me for whatever you wish, and I will give it to you.” And he vowed to her, “Whatever you ask me, I will give you, up to half of my kingdom.” And she went out and said to her mother, “For what should I ask?” And she said, “The head of John the Baptist.” And she came in immediately with haste to the king and asked, saying, “I want you to give me at once the head of John the Baptist on a platter.” And the king was exceedingly sorry, but because of his oaths and his guests he did not want to break his word to her. And immediately the king sent an executioner with orders to bring John’s head. He went and beheaded him in the prison and brought his head on a platter and gave it to the girl, and the girl gave it to her mother. When his disciples heard of it, they came and took his body and laid it in a tomb. 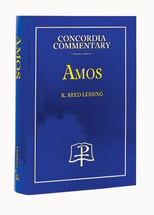 The following is from Amos, by R. Reed Lessing, Concordia Commentary series, copyright © 2009 by Concordia Publishing House. All rights reserved.

“The two foundations of the Northern Kingdom’s life are targeted for annihilation: the spiritual center, resting on the idolatrous ‘high places’ and ‘sanctuaries,’ and the political center, the king’s house or dynasty. The false shrines at Bethel and elsewhere have already been in Amos’ line of fire (e.g., 2:8; 3:14; 4:4; 5:5; see also 8:14; 9:1). But here, for the first time in the book, Yahweh names ‘Jeroboam’ in a judgment oracle, and the judgment will be that Yahweh will pursue the king’s house ‘with the sword’ (7:9). Two verses later, the priest Amaziah will interpret this oracle as meaning that ‘by the sword Jeroboam will die’ (7:11). Violent judgment for the royal household by means of ‘the sword’ is given only in these two Amos verses” (p. 466).