When Should Easter Be Celebrated? Part 2 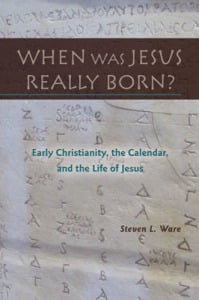 Yesterday we posted an excerpt from Dr. Steven Ware's book When Was Jesus Really Born? in which Dr. Ware discusses why Easter is celebrated on a Sunday. In today's continuation of that post, Dr. Ware answers the questions that ended yesterday's post: "Exactly what Sunday is it? And what authority was to determine the proper Sunday and publish it well in advance for the benefit of those Christians living far from Palestine and the annual announcement of the beginning of Nisan and the Passover?"

Although these questions are not answered by the documents from Nicaea, it is obvious from the “Festal Letters” written by Athanasius annually from AD 328–373 that the task of determining the proper date was given to astronomers in his diocese at Alexandria. Perhaps this was meant as a kind of Christian equivalent to the Jewish dependence on annual announcements of the Sanhedrin, but the problem remained the same: Unless calculations were made and letters were sent out well in advance, those living at a distance would be uninformed and therefore could only guess at the proper date for Easter. A second and related difficulty for Christians living at a distance from Alexandria was the fact that Athanasius’ bishopric was interrupted by no less than five periods of exile from his post, due at least partially to the continuing popularity of Arianism despite its condemnation at Nicaea.

It is therefore no surprise that a variety of forms of the computus, or cyclus paschalis (Easter cycle) were proposed and debated, and that they retained popularity for generations. At the long end of these was the aforementioned 532-year cycle of Annianus, although most preferred to use the shorter and more manageable cycles of 84 or 112 years designed at Rome, or the 95-year cycle designed at Alexandria. Certainly one of the earliest paschal calendars at Alexandria developed around Metonic nineteen-year cycles was that of Anatolius (d. 282)—a native of Alexandria who later became bishop of Laodicea.

In the interest of cooperation against the Arian heresy, ecclesiastical authorities at Rome and Alexandria managed in some years to compromise with one another on the proper date for Easter Sunday, but unfortunately each had their problematic limitations in computation: Astronomers at Alexandria dated the vernal equinox to 21 March, whereas those at Rome sometimes marked it as early as 18 March. The Alexandrians objected that anything before 21 March was too early because an Easter before 21 March would actually be in the twelfth month and therefore even in the wrong year (since the spring equinox was viewed as the beginning of the year). But the Romans objected that the Alexandrian computation allowed for Easter to be sometimes celebrated after 21 April, which made it in the second month of the year and therefore unacceptably late.

In addition, the Alexandrians stipulated that Easter had to be celebrated somewhere between lunae 15–21 (the fifteenth to twenty-first days of the lunar cycle) so that it would occur within a week after Passover (14 Nisan), since Scripture is clear that Jesus rose from the dead on the Sunday following Passover. The Romans, meanwhile, insisted on lunae 16–22, contending that since Jesus died on a Friday and rose on a Sunday he could not have risen from the dead as early as 15 Nisan. This meant, however, that if 15 Nisan was a Sunday (unacceptably early for the Romans) Easter could not be celebrated until 22 Nisan, which was more than a week after Passover and therefore unacceptable to the Alexandrians. Needless to say, in spite of the greater theological threat from Arianism, their cooperation was sporadic and short-lived.

A merger of sorts between the two sides appears to have been attempted by Victorius of Aquitaine with his Cursus Paschalis in AD 457. While using the Alexandrian (Metonic) methods of tracking lunar cycles, he nevertheless used the Roman observations of the age of the moon and retained the Roman lunar limits of dates for Easter. This apparently wide-minded and irenic approach, combined with his construction of a 532-year master cycle of dates for Easter, must have appeared initially impressive to ecclesiastical authorities, covering the period AD 28–559 (Anno Passionis 1–532, dated from Victorius’ supposed date of Jesus’ crucifixion and resurrection). Nevertheless, its use of differing systems of information, combined with other small historical inaccuracies, inevitably produced considerable confusion from both Roman and Alexandrian perspectives. Moreover, although in those years in which there was some question as to the correct date of Easter he included both early (Roman) and late (“Greek”) lunar figures and left the final decision to the Pope, in at least one year (AD 482) he violated the lunar limits of both Rome and Alexandria and incorrectly had the “Greeks” observing Easter on a Saturday. It was at least partially because of such inaccuracies and associated difficulties with Victorius’ cycle, therefore, that Dionysius Exiguus was enlisted by the Papacy to create a new Paschal cycle less than a century later.

The work of Dionysius and its impact is the focus of the next chapter. Before considering the work of Dionysius and his possible reactions to Victorius, however, it should stand out to us as truly remarkable that Victorius even dared to use astronomical measurements taken from Rome in the first place. Although not stated specifically in the documents from Nicaea, it is clear from several sources—from the early Paschal Cycle of Anatolius more than a century before Nicaea, to the Paschal Letters of Athanasius in the generation immediately following Nicaea, to the Paschal cycle of Dionysius two centuries later—that the intended authority for establishing the dates for Easter was to be the lunar observations taken from Alexandria. One of those pro-Alexandrian voices in the years just preceding the work of Victorius was Paschasinus, bishop of Lilybaeum (modern Marsala, Sicily), who in AD 444 responded to an inquiry from Pope Leo the Great concerning the proper dates for Easter by recommending that he use the Alexandrian calculations. That Paschasinus should ignore his nearer proximity to Rome and risk offending his spiritual superior for the sake of a scientifically accurate answer concerning the most important of Christian festivals is perhaps remarkable enough. But that Victorius, less than twenty years later, should ignore the several indications of Alexandrian accuracy, apparently for the sake of pleasing his superiors at Rome—with the unintended result of giving them a patently false sense of security in their own calculations—is nothing less than astonishing.

From When Was Jesus Really Born? Early Christianity, the Calendar, and the Life of Jesus, pages 94–97 © 2013 Steven L. Ware, published by Concordia Publishing House. All rights reserved.