What Are the Duties of Ministers of the Church? 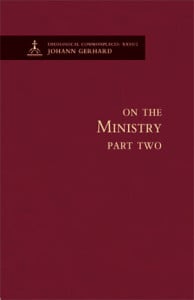 The following excerpt is from Theological Commonplaces: On the Ministry II in which Gerhard expounds on the duties of ministers of the Church.

265. The priesthood “is not leisure but the highest of tasks,” Bernard writes somewhere, and “episcopacy is the name of a work, not of honor,” according to Augustine (De civit. Dei, bk. 19, ch. 19). Now that we have explained the causes of the ecclesiastical ministry and its necessity, as well as the utility and dignity depending on them, it remains for us to speak about the duties of ministers of the church.

The duties are enumerated in different ways by different writers. Hugh of St. Victor, De sacr., bk. 2, part 2, ch. 5: “Every administration of the church consists in three things: in the sacraments, in orders, and in precepts.” Jerome, on Leviticus 8: “The duties of the priest are to learn something from God or to teach the people or to pray for the people,” etc. For our listing to be quite complete, however, we say that the duties of the ministry are most accurately evaluated on the basis of the end for which the ecclesiastical ministry was divinely instituted and is still being preserved. In earlier sections we said that this end was twofold: namely, the principal end, the glory of God; and an intermediate end, the conversion and salvation of men. An intermediate end has the character of a means through which one reaches the principal and ultimate end. From this it has even received its name. The duties and actions of ministers, through which God wishes to be efficacious for the conversion and salvation of men, have to do with attaining the intermediate end.

(I) Human beings, who are to be converted and saved, are born “in the darkness of ignorance” (Isa. 9:2; Luke 1:79; John 1:5; Acts 26:18; Eph. 5:8). They are “darkened in their understanding, alienated from the life of God through ignorance of God” (Eph. 4:18). The Holy Spirit wants to dispel that inborn darkness through the light of the heavenly Word (Ps. 19:8; 119:105; 2 Pet. 1:19). Therefore the first and foremost duty of ministers of the church is the preaching of the Word, through which the Holy Spirit is efficacious in providing an inner illumination of the heart. Acts 26:17–18: “I shall appoint you as a minister, sending you to the Gentiles, to open their eyes that they may be converted from darkness to light.”

(II) To the Word are added the Sacraments, the signs of divine grace and of the evangelical promises. Thus the ancients call them the ὁρατόν or “visible” Word. Therefore the second duty of ministers is the administration of the Sacraments. 1 Cor. 4:1: “This is how one should regard us, as servants of Christ and stewards of the mysteries of God.” Matt. 28:19: “Go, therefore, teach all nations, baptizing them.” Here the preaching of the Word and the administration of Baptism are connected.

(III) However, every effort of ministers is in vain without the blessing of heaven. 1 Cor. 3:6–7: “I planted, Apollos watered, but God gave the growth. So neither he who plants nor he who waters is anything, but God who gives the growth.” Augustine, Sermon 4 de verb. apost.: “We speak, but God educates; we speak, but God teaches; He who teaches in the inner parts has His throne in heaven.” Therefore the third duty of ministers is to pray diligently for the flock entrusted to them, 1 Sam. 12:23: “Far be it from me that I should sin against the Lord by ceasing to pray for you and to teach you the good and right way.” Here the instruction of the hearers and prayer for the fruitfulness of the Word are connected.

(IV) Furthermore, those who teach soundly but live shamefully take away with the left hand what they gave with the right. At times they hurt more by example than they benefit with the Word. Therefore ministers should lead their hearers with the example of an excellent life, and so their fourth duty is the honorable management of their life and behavior. Titus 2:7: “Show yourself in all respects a model of good deeds.”

(V) Because, in addition to the inborn darkness of ignorance, a corruption of the will and proclivity toward every evil adhere in men, it must be repressed by the bonds of ecclesiastical discipline entrusted divinely to the ministry, lest conversion through the Word be hindered or the converted be led astray. Therefore the fifth duty of ministers is the administration of ecclesiastical discipline. Matt. 18:17: “If they will not hear them, tell it to the church.”

(VI) In the exercise of divine worship, certain solemn, public rites should be preserved that aim at good order and decorum and were introduced by the pious consensus of the whole church. Therefore the protection of ecclesiastical rites, which were approved by serious consideration and which give useful instruction concerning many topics in public assemblies, also pertains to the ecclesiastical ministry. Nor should a minister change them, leading to scandal in the church, because of some private desire of his mind. Consequently, the sixth duty of ministers is the preservation of ecclesiastical rites.

(VII) Finally, duties of charity leading to the alleviation of poverty and affliction are owed to those among the hearers who are orphans, widows, poor, homeless, and ill. Therefore the care of the poor and the visitation of the sick pertains to the minister of the church, that he might faithfully collect and dispense money destined for the use of the poor. If this duty has been entrusted to the ecclesiastical treasurers, he should exhort his hearers diligently to demonstrate beneficence toward the poor. He should also see to it that the dispensing of the goods of the church is done lawfully and correctly (1 Cor. 16:2; 2 Cor. 9:1; etc.).

All told, therefore, there are seven duties of ministers of the church. We can conveniently relate all the rest to those seven: (1) the preaching of the heavenly Word, (2) the administration of the Sacraments, (3) praying for the flock entrusted to them, (4) the honorable management of their life and behavior, (5) the administration of church discipline, (6) the preservation of ecclesiastical rites, (7) the care of the poor and the visitation of the sick. We shall discuss each in greater detail.