The Christian Year of Grace [EXCERPT] 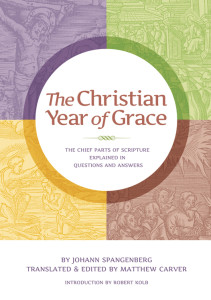 After Martin Luther’s Postils (sermons on the appointed Bible readings of the Church Year), Johann Spangenberg’s Questions & Answers were the premier Lutheran devotional book of the Reformation era. His explanations of the chief parts of Scripture, in question-and-answer format, taught and fed countless Evangelical-Lutheran people of all ages and vocations for centuries. Now for the first time, this entire work has been translated by Matthew Carver for modern believers to be built up in their knowledge of God, faith in Christ, and love for God and neighbor.

In this excerpt, Spangenberg expands on the biblical text of Luke 2 and ponders the difficulties that the Holy Family may have faced at Christ's birth. Thereby he reminds us that Christ, even in His birth, experienced humility and suffering for our sake, on account of which the angels rejoice.

What is the subject of this Gospel?

The birth of our Lord Jesus Christ. First, when, how, and where it took place; second, how it was publicized to the world; third, what kind of miracles occurred.

When did Christ’s birth take place?

In the last monarchy. “When the time was fulfilled,” says St. Paul, “God sent His Son, born of a woman and put under the Law, to redeem those who were under the Law, that we might receive the adoption as children” (Gal. 4 [:5]).

How did the birth of Christ take place?

In great poverty and wretchedness.

If Mary lived in Nazareth, how did she get to Bethlehem?

Here God’s wonders and the means He provided for this are evident. Caesar Augustus caused a decree to go out that all the world should be taxed. Then Joseph went up from Galilee, from the city of Nazareth to the city of Bethlehem, to be taxed with Mary his betrothed, who was with child.

Was this journey of Mary’s difficult?

Difficult, toilsome, and miserable to be sure, because of the timing, lodging, and delivery.

Why because of the timing?

She had to journey as a poor mother with a heavy body, and walk on foot in the middle of winter when it was very cold, when other women would certainly have been traveling in coaches with all glory and splendor and rich provisions.

Why because of the inn?

They had to give way and yield their place to everyone in the inn like the lowliest and most despised people, until they were finally directed to the cattle in the stable, while other guests, and certainly many wicked men, were richly and well provided for with good rooms, food, and bedding.

Why because of the delivery?

She was there as a young woman who was about to give birth for the first time in a strange place, lacking the least article needed by a woman in labor. No one offered to help or to deliver the child. Everyone was drunk as a fool in the inn so that no one came to the aid of this poor woman.

Did the world know about this birth?

Not in the least. Mary was regarded as nothing in Nazareth among her neighbors. She came to Bethlehem pregnant. No one came to her aid. This poor couple, Joseph and Mary, were sent off to the corner of the stable, and when “the time came for her to give birth, . . . she brought forth her first Son,” Jesus. And when they found no room in the inn, “they wrapped Him in swaddling cloths and laid Him in a manger, for they had no other room in the inn.” Meanwhile the great, mighty, noble, and rich lay on soft beds, no doubt adorned with gold, silk, and satin.

But what happened in heaven when Christ was born?

While the world was stone-blind to this blessed birth and knew nothing about it, there was so much joy in heaven that even the angels could not stay inside but had to emerge and make this birth known to the poor shepherds in the field. No doubt there were more shepherds in the land, both physical and spiritual, and yet the birth of Christ was not told to any but these in Bethlehem.

What did the angels do at this birth?

First, an angel approached the shepherds in the field, and the glory of God shone around them, and they were very afraid.

Did he not comfort them?

He said, “Fear not. Behold, I make known to you great joy which will be for all people: for to you is born this day the Savior, which is Christ the Lord, in the city of David.”

What did the other angels do?

They joined the first angel, and there was a great multitude of the heavenly hosts, praising God and saying, “Glory be to God on high, and peace on earth, and to men good will.”